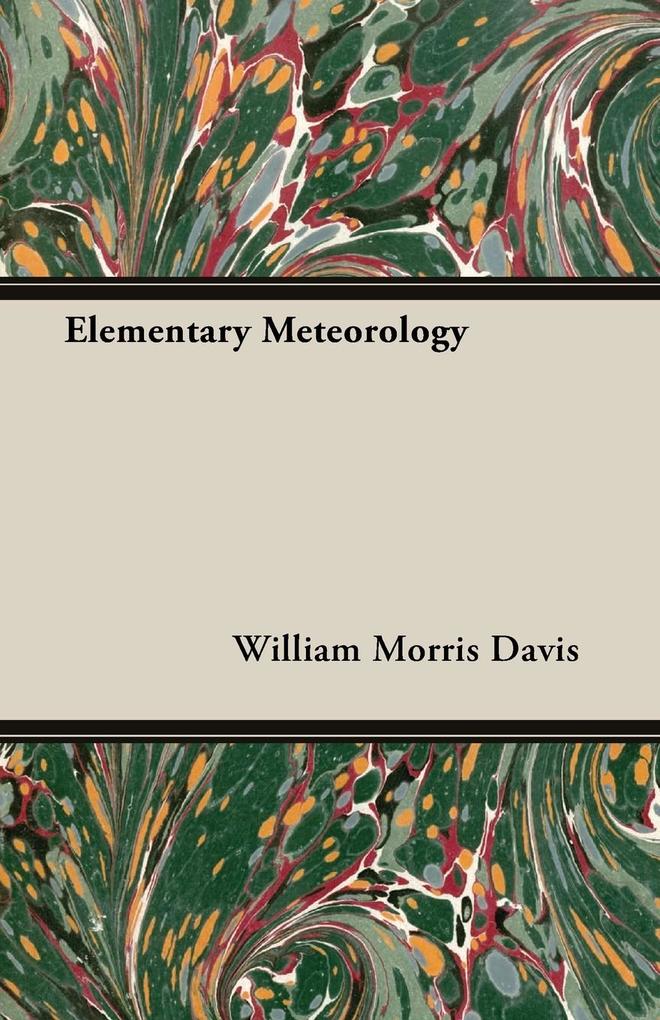 von William Morris Davis
Paperback. Sprache: Englisch.
Taschenbuch
ELEMENTARY METEOROLOGY BY WILLIAM MORRIS DAVIS 1894, PREFACE. THOSE who are already acquainted with, the science of meteorology will need no words of mine to show that the greatest share of whatever value this book may contain comes from my having … weiterlesen
Dieser Artikel ist auch verfügbar als:
Geschenk per Mail versenden
Taschenbuch

ELEMENTARY METEOROLOGY BY WILLIAM MORRIS DAVIS 1894, PREFACE. THOSE who are already acquainted with, the science of meteorology will need no words of mine to show that the greatest share of whatever value this book may contain comes from my having studied and followed the work of the late Professor William Ferrel of Washington. To his remarkable insight and ingenious analysis we owe the best part of the understanding of general atmospheric processes that has yet been reached. Those who here first come to know something of the science of the atmosphere, and who are perhaps thus brought to desire further acquaintance with it, should not fail to study TTerrePs Popular Treatise on the Winds, in which his more mathematical essays are reduced to a simpler form. Yet after Ferrel, an almost equal indebtedness must be acknowledged to Professor Julius Hann of Vienna, from whose broad and accurate studies I have found assistance at every turn. His Klimatologie, the standard work of the kind, and his numerous special articles, have furnished me with much information as well as with many well-defined examples of meteorological conditions and processes. The names of many other meteorologists to whom acknowledgment is due come to mind while revising the pages of this book, which presents the condensed results of my reading, observing and teaching during the last fifteen years. Some of these names are mentioned on the appropriate pages, but in general-1 have not attempted to make explicit reference to the sources of information that have been consulted, believing that in a school book, as this is primarily intended to be, such references are not of much value, especially as they too commonly lead to so m es of information inaccessible in school libraries. A personal acknowledgment must, however, be made here to Mr. H. H. Clayton, of Blue Hill Observatory, for assistance in connection with the chapter on clouds to Mr. Alexander McAdie, of the Weather Bureau in Washington, for his advice in the sections on atmospheric electricity and to Mr. E. DeC. Ward, successor of Professor Harrington as editor of the American Meteorological Journal, for many suggestions in connection with the teaching of meteorology, in which he has for some years been associated with me in Harvard College. IV PREFACE. There are certain books to which the teacher and the independent student should, if possible, have access. Besides the works by Ferrel and Harm, above named, the list should include Abercrombys Weather New York, 1887, Blanfords Climates and Weather of India London, 1889, Buchaus article on Meteorology in the ninth edition of the Encyclopedia Britannica and his essay on Atmospheric Circulation, with its elaborate series of isothermal and isobaric charts for every month in the year, in a volume of the report on the Challenger Expedition London, 1889 unfortunately, only a small edition of this great work has been published, and its cost is comparatively high, Eliots Handbook of Cyclones in the, Bay of Bengal Calcutta, 1890, Greelys American Weather New York, 1888, Scotts Elementary Meteorology London, 1885, Sprungs LeJtrbuch der Meteorologie Hamburg, 1885 the best elementary mathematical statement of the subject, and Waldos Modern Meteorology New York, 1893. The meteorological section of Berghaus Physische Atlas Gotha, 1887, will he found of much assistance. Abbes translation of foreign meteorological memoirs, recently published by the Smithsonian Institution, will be useful to those who are proficient in mathematical physics, as indicating the direction of advanced research in meteorology by the best European investigators...