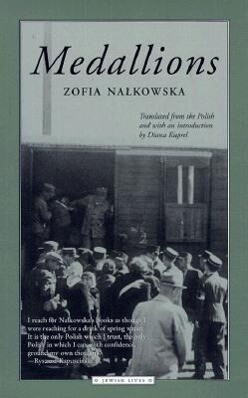 von Zofia Nalkowska
Sprache: Englisch.
Taschenbuch
Considered a masterpiece of antifascist world literature, Medallions (written in 1945 and first published in 1946) stands as the culmination of Nalkowska's literary style -- a style that the Polish writer Witold Gombrowicz once described as "the iron … weiterlesen
Geschenk per Mail versenden
Jetzt nur

Considered a masterpiece of antifascist world literature, Medallions (written in 1945 and first published in 1946) stands as the culmination of Nalkowska's literary style -- a style that the Polish writer Witold Gombrowicz once described as "the iron capital of her art and one of the very few exportables in our national literature." Written in documentary-narrative form, with simple, concise, severely elegant prose, the book gives voice to the experience of victims and witnesses of the Nazi genocide.Medallions comprises seven short stories and one summation, "The Adults and Children of Auschwitz." These terse, sometimes fragmented pieces take the form of testimonials, private interviews, and chance conversations in which the protagonists, speaking for themselves from their limited understanding of the human drama, also speak on behalf of millions. More than mere historical record, Medallions presents the reader with a startlingly immediate performance -- the repetition of a past event as it persists in the testimonial present, in the scars on the consciousness and consciences of individuals.

A novelist, dramatist, short-story writer, and essayist, Zofia Nalkowska (1884-1954) was a leading proponent of the avant-garde of her day. A resident of Warsaw, she was an active member of the Polish PEN Club, the first female member of the Polish Academy of Literature, and the patron of a popular Warsaw literary salon. Her life in occupied Warsaw during World War II is the subject of her "Wartime Diaries" and "Medallions." Diana Kuprel has a doctorate in comparative literature from the University of Toronto. She is a postdoctoral fellow for the Literary History Project, University of Toronto, and editor in chief of "Books in Canada: The Canadian Review of Books."