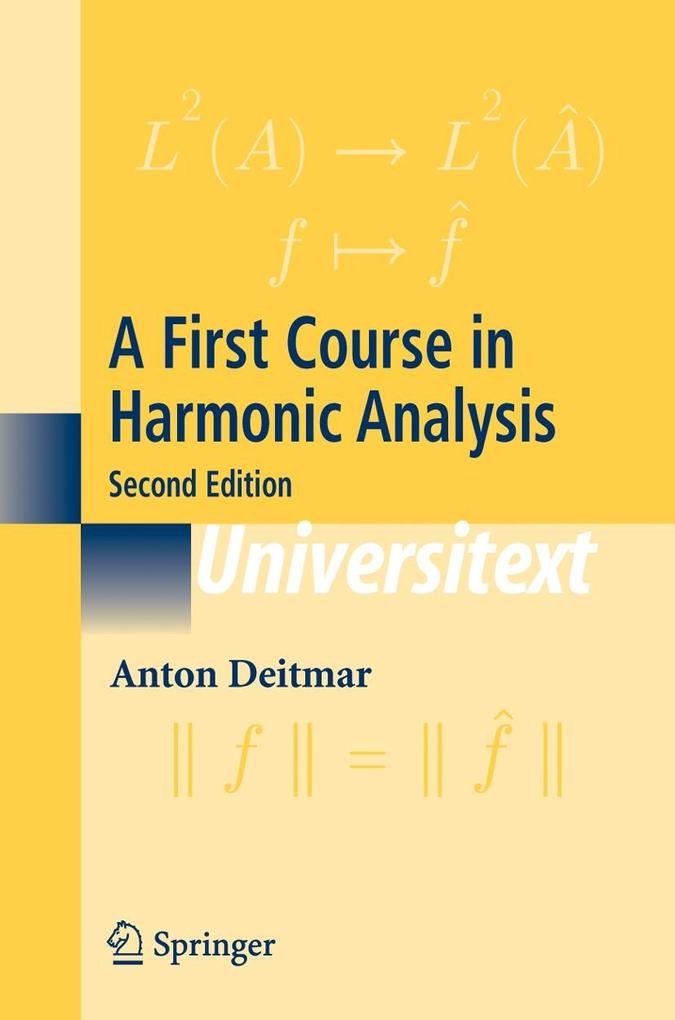 A First Course in Harmonic Analysis

Affordable softcover second edition of bestselling title (over 1000 copies sold of previous edition)
A primer in harmonic analysis on the undergraduate level
Gives a lean and streamlined introduction to the central concepts of this beautiful and utile theory.
Entirely based on the Riemann integral and metric spaces instead of the more demanding Lebesgue integral and abstract topology.
Almost all proofs are given in full and all central concepts are presented clearly.
Provides an introduction to Fourier analysis, leading up to the Poisson Summation Formula.
Make the reader aware of the fact that both principal incarnations of Fourier theory, the Fourier series and the Fourier transform, are special cases of a more general theory arising in the context of locally compact abelian groups.
Introduces the reader to the techniques used in harmonic analysis of noncommutative groups. These techniques are explained in the context of matrix groups as a principal example.

Professor Deitmar holds a Chair in Pure Mathematics at the University of Exeter, U.K. He is a former Heisenberg fellow and was awarded the main prize of the Japanese Association of Mathematical Sciences in 1998. In his leisure time he enjoys hiking in the mountains and practicing Aikido.

From the reviews of the first edition:

"This lovely book is intended as a primer in harmonic analysis at the undergraduate level. All the central concepts of harmonic analysis are introduced using Riemann integral and metric spaces only. The exercises at the end of each chapter are interesting and challenging; no solutions are given. ..."

"... In this well-written textbook the central concepts of Harmonic Analysis are explained in an enjoyable way, while using very little technical background. Quite surprisingly this approach works. It is not an exaggeration that each undergraduate student interested in and each professor teaching Harmonic Analysis will benefit from the streamlined and direct approach of this book."

"This is the second edition of a beautiful introduction to harmonic analysis accessible to undergraduates. ... The first part deals with classical Fourier analysis, the second provides the extension to locally compact abelian groups, and the third part is concerned with noncommutative groups." (G. Teschl, Internationale Mathematische Nachrichten, Issue 202, 2006)