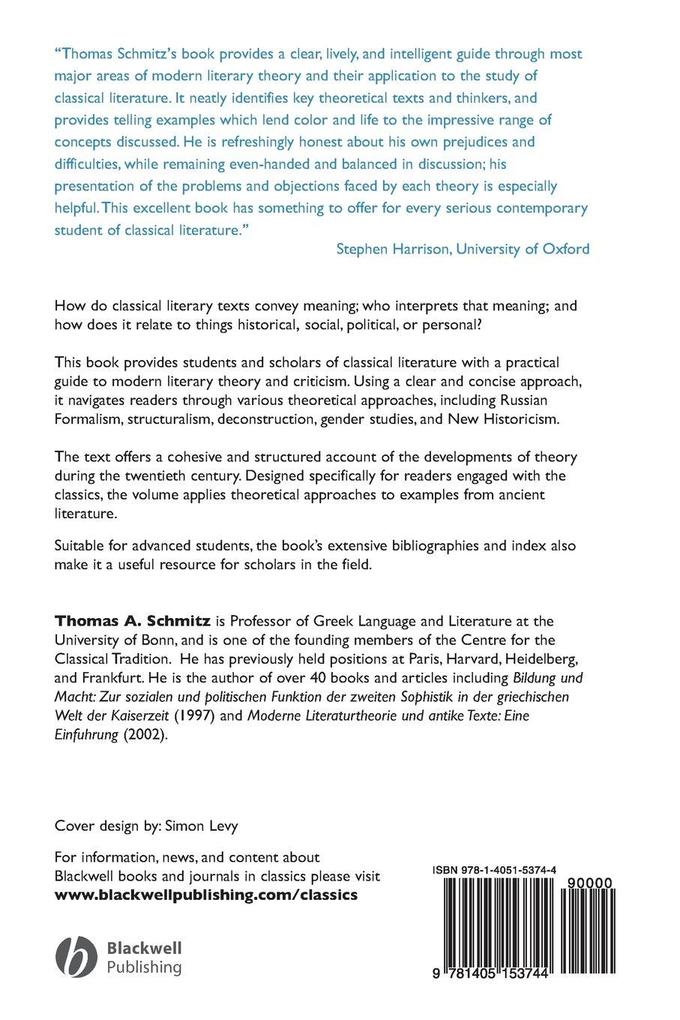 How do classical literary texts convey meaning; who interprets that meaning; and how does it relate to things historical, social, political, or personal?

This book provides students and scholars of classical literature with a practical guide to modern literary theory and criticism. Using a clear and concise approach, it navigates readers through various theoretical approaches, including Russian Formalism, structuralism, deconstruction, gender studies, and New Historicism.

The text offers a cohesive and structured account of the developments of theory during the twentieth century. Designed specifically for readers engaged with the classics, the volume applies theoretical approaches to examples from ancient literature.

Suitable for advanced students, the book's extensive bibliographies and index also make it a useful resource for scholars in the field.

Acknowledgments for the English Translation.

What Is, and To What End Do We Study, Literary Theory?.

How to Use This Book.

The Question of Literariness.

The Meaning of Differences.

Roland Barthes and the Study of Narrative Texts.

Bakhtin's Life and the Problem of His Writings.

Dialogism and the Novel.

Oral Cultures: The Theses of Goody and Watt.

What Does "Orality" Mean?.

The Homeric Epics as a Test Case.

The Foundations: Derrida's Criticism of Logocentrism.

The Role of the Author.

The Responsibility of the Interpreter.

The Power of Discourse.

Objections to Foucault's Analysis of Discourse.

The Debate about Foucault's Interpretation of Ancient Sexuality.

The Feminist Movement and Definitions of "Woman".

From Images of Women to Gender Studies.

Language and the Unconscious: Jacques Lacan.

Thomas A. Schmitz is Professor of Greek Language and Literature at the University of Bonn, and is one of the founding members of the Centre for the Classical Tradition. He has previously held positions at Paris, Harvard, Heidelberg, and Frankfurt. He is the author of over 40 books and articles including Bildung und Macht: Zur sozialen und politischen Funktion der zweiten Sophistik in der griechischen Welt der Kaiserzeit (1997) and Moderne Literaturtheorie und antike Texte: Eine Einfuhrung (2002).

"A major aspect of this book is Schmitz s refreshing modesty and candour." ( Journal of the Classical Association of Canada , Winter 2009)

"...a clear and engaging introduction to some of the most important areas of modern literary theorizing. What sets this apart from a simple introduction, however, is the way that the general theoretical position outlined in each chapter is keyed into the context of modern classical studies...a useful book and one that can be strongly recommended to undergraduates and even intrepid sixth-formers..." ( Greece and Rome , Vol 55 No. 2 2008)
"Brief description of theoretical approaches ...[in] frank manner of discourse ... Schmitz tries to help students understand the concepts he explains." ( Bryn Mawr Classical Review )

"As a reference guide, a bibliographical resource and an engaging read, this book should prove an asset to many." ( Journal of Classics Teaching )

"Schmitz is clearly an intelligent reader and advocate of theory. It is a solid piece of work which will, I hope, serve as a starting point for acquainting many classicists with the questions and challenges theory has to offer. The field as a whole will only benefit from Schmitz s contribution." ( New England Classical Journal )