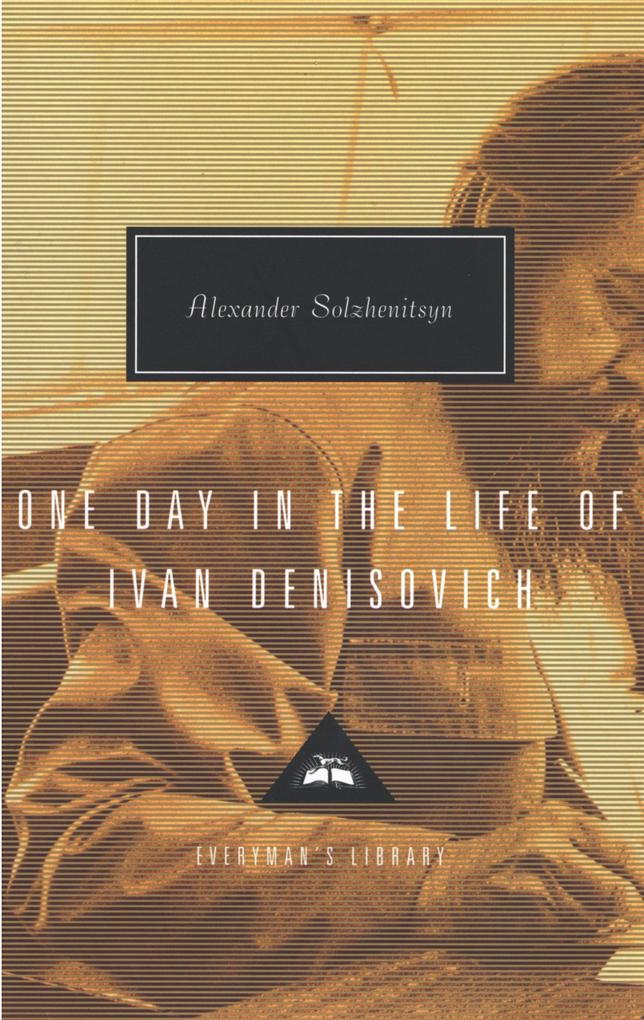 One Day in the Life of Ivan Denisovich

15% Rabatt³ sichern mit Gutscheincode: 15PROZENT
​
One of the most chilling novels about the oppression of totalitarian regimes and the first to open Western eyes to the terrors of Stalin's prison camps; if Solzhenitsyn later became Russia's conscience in exile, this is the book with which he first c … weiterlesen
Dieses Buch ist auch verfügbar als:
Geschenk per Mail versenden
Buch

Titel: One Day in the Life of Ivan Denisovich
Autor/en: Aleksandr Isaevich Solzhenitsyn

One of the most chilling novels about the oppression of totalitarian regimes and the first to open Western eyes to the terrors of Stalin's prison camps; if Solzhenitsyn later became Russia's conscience in exile, this is the book with which he first challenged the brutal might of the Soviet Union.

Alexander Solzhenitsyn grew up in Rostov-na-Donu, where he studied mathematics at Rostov State Univ. He served in the Red Army, rising to the rank of artillery captain, and was decorated for bravery. In 1945 he was arrested for criticizing Stalin in letters to a friend and sentenced to eight years in labor camps. After completing his prison sentence, he was exiled to the Kazakh SSR (now Kazakhstan). Stalin died in 1953 and Solzhenitsyn's citizenship was restored in 1956. His first novels describe the grimness of life in the vast labor-camp system. One Day in the Life of Ivan Denisovich was permitted publication in 1962 through the personal intervention of Nikita Khrushchev, in an effort to encourage anti-Stalinist feeling. The book was hailed as an exposé of Stalinist methods, and it placed the author in the foremost ranks of Soviet writers. With Khrushchev's deposition, Solzhenitsyn's succeeding works were banned, and he was continually censured by the Soviet press.

With subsequent novels- The First Circle (1968), detailing the lives of scientists forced to work in a Stalinist research center, and Cancer Ward (1968), concerning the complex social microcosm within a government hospital-censorship tightened, and Solzhenitsyn was increasingly regarded as a dangerous and hostile critic of Soviet society. His books found publication and an enormous audience abroad, and in the USSR they were circulated in samizdat (self-publishing, underground) editions. In 1969 Solzhenitsyn was expelled from the Union of Soviet Writers and prohibited from living in Moscow.

In 1970 he was awarded the Nobel Prize in Literature, but government pressure, specifically the threat of not being allowed to return from Stockholm, compelled him to decline the prize. In 1973, fearing that he might soon be imprisoned again, Solzhenitsyn authorized foreign publication of The Gulag Archipelago, a vast work that he had completed in 1968 documenting, with personal interviews and reminiscences, the operation of the oppressive Soviet system from 1918 to 1956. In Feb., 1974, Solzhenitsyn was arrested, formally accused of treason, stripped of his citizenship, and forcibly deported to the West. In exile he personally accepted his Nobel Prize in Stockholm (1974).

Solzhenitsyn ultimately settled in the United States, living in rural Vermont, and in 1980 The Oak and the Calf and The Mortal Danger were published. In 1990 Mikhail Gorbachev restored the writer's citizenship and the following year treason charges were dropped, laying the groundwork for Solzhenitsyn's 1994 return to his homeland.

Schreiben Sie eine Bewertung für: One Day in the Life of Ivan Denisovich