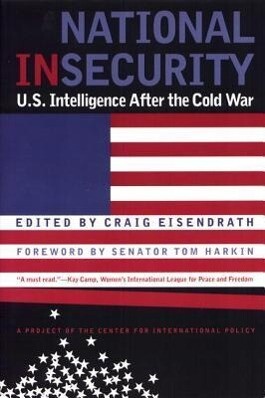 A drastic reform of intelligence activities is long overdue. The Cold War has been over for ten years. No country threatens this nation's existence. Yet we still spend billions of dollars on covert action and espionage.In National Insecurity ten prominent experts describe, from an insider perspective, what went wrong with U.S. intelligence and what will be necessary to fix it. Drawing on their experience in government administration, research, and the foreign service, they propose a radical rethinking of the United States' intelligence needs in the post -- Cold War world. In addition, they offer a coherent and unified plan for reform that can simultaneously protect U.S. security and uphold the values of our democratic system.As we now know, even during the Cold War, when intelligence was seen as a matter of life and death, our system served us badly. It provided unreliable information, which led to a grossly inflated military budget, as it wreaked havoc around the world, supporting corrupt regimes, promoting the drug trade, and repeatedly violating foreign and domestic laws. Protected by a shroud of secrecy, it paid no price for its mistakes. Instead it grew larger and more insulated every year.Taking into consideration our strategic interests abroad as well as the price of covert operations in dollars, in reliability, and in good will, every American taxpayer can be informed by and will want to read this book. National Insecurity is essential for readers interested in contemporary political issues, international relations, U.S. history, public policy issues, foreign policy, intelligence reform, and political science.

"The distinguished contributors to this book present a wide range of perspectives from which to assess our intelligence system. Their decades of public service command tremendous respect. Their views break new ground and demand the attention of the White House and of lawmakers on both sides of the aisle. This book should be required reading by all congressional committees concerned with intelligence policy, surveillance, and appropriations, and by all Americans." --Senator Tom Harkin, from the Foreword "[A] comprehensive sweep of the disputes and principles that underlie the struggle for an ethics-grounded U.S. intelligence commitment." --Baltimore Sun "[The book] was published in 2000 but unfortunately, its relevance and importance have increased exponentially since the turn of the century... This book is a must read."--The Journal of European Affairs