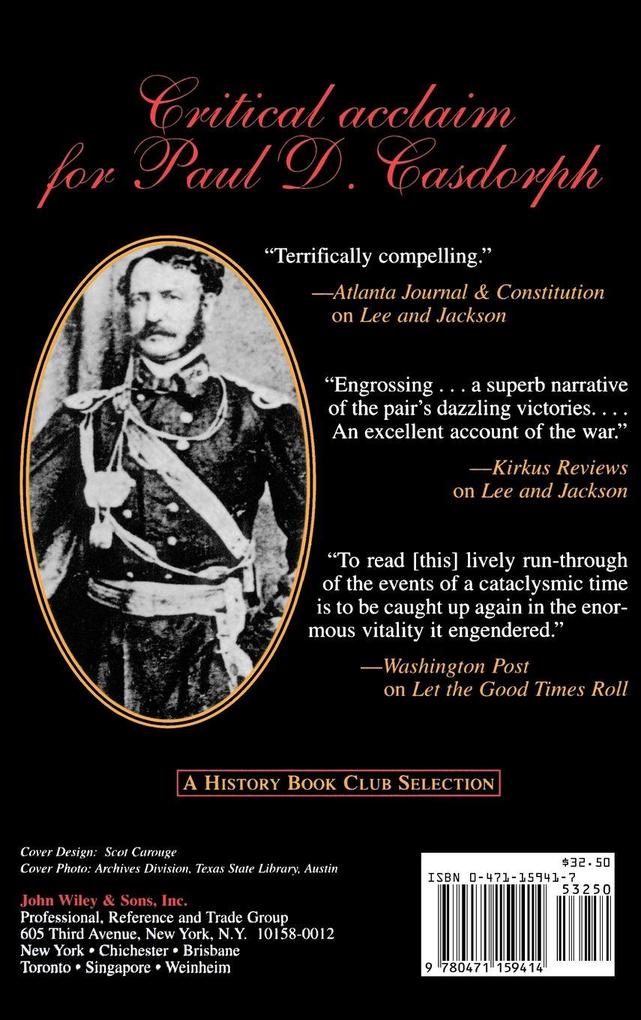 von Paul D. Casdorph
His Life and Campaigns. HC gerader Rücken kaschiert. Sprache: Englisch.
Buch (gebunden)
He was one of the most intriguing characters of the Civil War era. As famous for his courage as for his ornate uniforms and flamboyant style, he won intrepid victories on the peninsula of Virginia and successfully defended Texas during the long war's … weiterlesen
Geschenk per Mail versenden
Buch

He was one of the most intriguing characters of the Civil War era. As famous for his courage as for his ornate uniforms and flamboyant style, he won intrepid victories on the peninsula of Virginia and successfully defended Texas during the long war's waning days. Now, in the first full-length biography of Major General John Bankhead Magruder, acclaimed historian Paul D. Casdorph has created a brilliant portrait of the Confederate general dubbed "Prince John." Graduating from West Point in 1830, Magruder embarked upon three action-packed decades of service in the U.S. Army, taking him from Florida during the Seminole wars to the frontiers of Maine, New York, and Texas. By the spring of 1861, Prince John Magruder had risen to the estimable position of commander of the Washington garrison. Although he knew Abraham Lincoln and several cabinet members personally, when secession and war became imminent, Magruder resigned his duties as the president's bodyguard to race home to Virginia to answer the Confederate call to arms. In the opening engagements of the Civil War, Prince John's initiative and audacity earned him both admiration and acclaim. His often outrageous behavior, spurred by heavy drinking, also brought notoriety. Magruder's larger-than-life style was in sharp contrast to the rigid standards demanded by the Confederate leadership, and Prince John was transferred to the district of Texas, New Mexico, and Arizona. Once out from under the eyes of his stern taskmasters in Virginia, the eccentric - yet unquestionably courageous - officer rallied his command. His heroic defense of the Texas coast culminated in a great victory at the Battle of Galveston on New Year's Day, 1863. When the war ended, he headed for Mexico, and yet another great adventure. Serving in the government of Emperor Maximilian, Magruder, once more, added his own unique flourish to a historic upheaval. With enemy forces closing in, he attempted to arrange an escape plot for the doomed ruler.

Youth. Lieutenant Magruder. A Box in the National Theater. "John Was Always Magnificent." Big Bethel. Up the Peninsula. The Seven Days. Galveston. "The People of Texas Have Made a Demi-god of Him." "You May Fully Depend on Me." Last Things. Notes. Bibliography. Index.

PAUL D. CASDORPH is Chairman Emeritus of the Department of History at West Virginia State College. He is the author of several books, including Let the Good Times Roll: Life at Home in America During World War II and the Civil War dual biography Lee and Jackson: Confederate Chieftains.