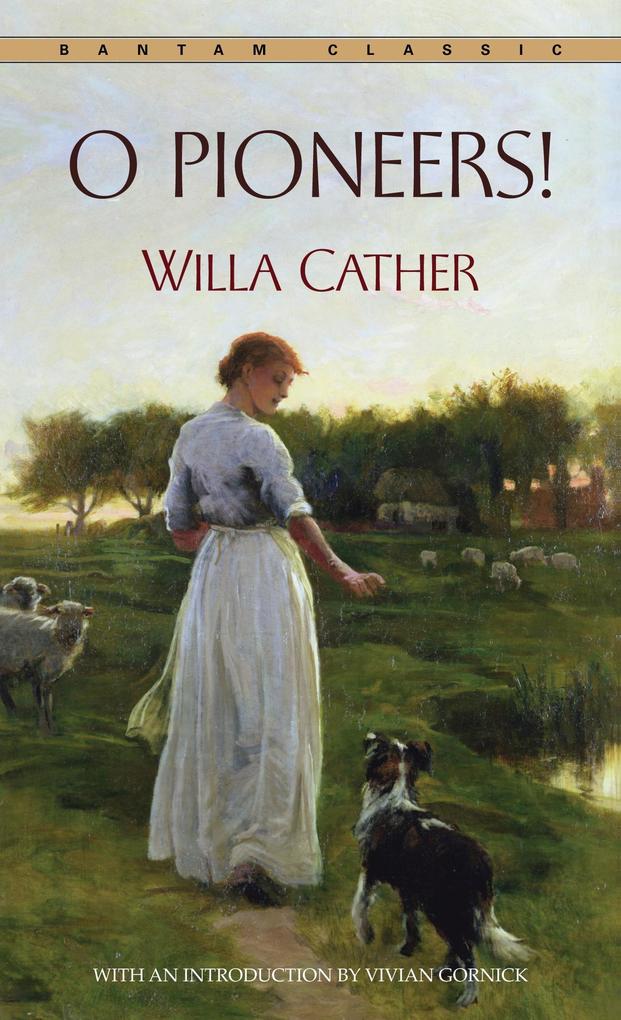 With an Introduction by Vivian Gornick.
'A Bantam Classic'.
Sprache: Englisch.

One of America's greatest women writers, Willa Cather established her talent and her reputation with this extraordinary novel-the first of her books set on the Nebraska frontier. A tale of the prairie land encountered by America's Swedish, Czech, Bohemian, and French immigrants, as well as a story of how the land challenged them, changed them, and, in some cases, defeated them, Cather's novel is a uniquely American epic.

Alexandra Bergson, a young Swedish immigrant girl who inherits her father's farm and must transform it from raw prairie into a prosperous enterprise, is the first of Cather's great heroines-all of them women of strong will and an even stronger desire to overcome adversity and succeed. But the wild land itself is an equally important character in Cather's books, and her descriptions of it are so evocative, lush, and moving that they provoked writer Rebecca West to say of her: "The most sensuous of writers, Willa Cather builds her imagined world almost as solidly as our five senses build the universe around us."

Willa Cather, perhaps more than any other American writer, was able to re-create the real drama of the pioneers, capturing for later generations a time, a place, and a spirit that has become part of our national heritage.

Wila Cather was probably born in Virginia in 1873, although her parents did not register the date, and it is probably incorrectly given on her tombstone. Because she is so famous for her Nebraska novels, many people assume she was born there, but Wila Cather was about nine years old when her family moved to a small Nebraska frontier town called Red Cloud that was populated by immigrant Swedes, Bohemians, Germans, Poles, Czechs, and Russians. The oldest of seven children, she was educated at home, studied with a Latin neighbor, and read the English classics in the evening. By the time she went to the University of Nebraska in 1891-where she began by wearing boy's clothes and cut her hair close to her head-she had decided to be a writer.

After graduation she worked for a Lincoln, Nebraska, newspaper, then moved to Pittsburgh and finally to New York City. There she joined McClure's magazine, a popular muckraking periodical that encouraged the writing of new young authors. After meeting the author Sarah Orne Jewett, she decided to quit journalism and devote herself full time to fiction. Her first novel, Alexander's Bridge, appeared in serial form in McClure's in 1912. But her place in American literature was established with her first Nebraska novel, O Pioneers!, published in 1913, which was followed by her most famous pioneer novel, My Antonia, in 1918. In 1922 she won the Pulitzer Prize for one of her lesser-known books. One of Ours. Death Comes for the Archbishop (1927), her masterpiece, and Shadows on the Rock (1931) also celebrated the pioneer spirit, but in the Southwest and French Canada. Her other novels include The Song of the Lark (1915), The Professor's House (1925), My Mortal Enemy (1926), and Lucy Gayheart (1935). Wila Cather died in 1947.

The land belongs to the future... that's the way it seems to me....I might as well try to will the sunset over there to my brother's children. We come and go, but the land is always here. And the people who love it and understand it are the people who own it -- for a little while."

O Pioneers! (1913) was Willa Cather's first great novel, and to many it remains her unchallenged masterpiece. No other work of fiction so faithfully conveys both the sharp physical realities and the mythic sweep of the transformation of the American frontier -- and the transformation of the people who settled it. Cather's heroine is Alexandra Bergson, who arrives on the wind-blasted prairie of Hanover, Nebraska, as a girl and grows up to make it a prosperous farm. But this archetypal success story is darkened by loss, and Alexandra's devotion to the land may come at the cost of love itself.

At once a sophisticated pastoral and a prototype for later feminist novels, O Pioneers! is a work in which triumph is inextricably enmeshed with tragedy, a story of people who do not claim a land so much as they submit to it and, in the process, become greater than they were.
Kunden, die diesen Artikel gekauft haben, kauften auch
Schreiben Sie eine Rezension