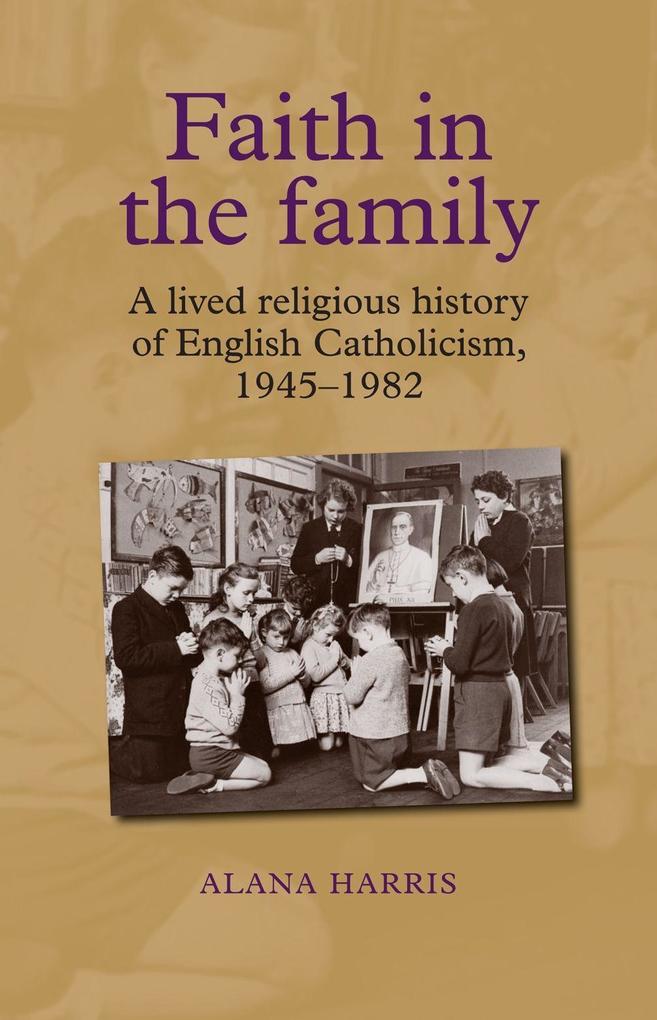 Faith in the family

14% Rabatt sichern mit Gutscheincode: LIEBE14
​
Assesses the impact of the Second Vatican Council on the ordinary believer, alongside contemporaneous shifts in British society -- .

Assesses the impact of the Second Vatican Council on the ordinary believer, alongside contemporaneous shifts in British society -- .


1. Introduction: a Vatican rag
2. English Catholicism reconsidered: beyond 'ghettos' and 'golden ages'
3. Gatherings at the family table: the liturgy, the Eucharist and Christ Our Brother
4. 'A model for many homesteads': Marian devotion, the Holy Family and Catholic conceptions of marriage and sexuality
5. 'Plaster saints' or 'spiritual friends'? St Therese of Lisieux, St Bernadette Soubirous and the Forty Martyrs
6. Conclusion: hymns ancient and modern Appendix 1: Oral history interviewees Select bibliography Index

Alana Harris is the Darby Fellow in History at Lincoln College, University of Oxford

'Faith in the family fills an important gap in the history of the religious and devotional life of English lay Catholics in the twentieth century. Harris's selection of vivid details from interviews and evocative illustrations from devotional ephemera make for fascinating reading. This is a timely and welcome contribution to our understanding of the devotional life of English Catholics in modern times.' Mary Heimann, University of Strathclyde 'Faith in the family is an outstanding contribution to the history of modern British religion which breaks new ground in its rehabilitation of popular Catholic spirituality and in its use of the intergenerational family structure and married life as key sites for the formation of twentieth-century religious and gendered identities. Drawing upon an impressive array of written, visual and oral sources, Alana Harris traces the modulations in the lived religious experiences of English Catholics during a period of significant social and cultural transformation. Her sophisticated analysis of current debates around gender, sexuality and secularisation as well as her remarkable ability to present complex theological concepts in a highly accessible and thought-provoking manner make this book a model of interdisciplinary brilliance.' Sue Morgan, University of Chichester 'Dr. Harris' beautifully written book offers a multilayered history of the changing meanings of the Catholic faith and devotional practices in late-twentieth-century Britain. By interweaving the cultural, the institutional and the personal, this is no simple story of secularisation, but rather a gripping and at times moving 'lived history' of changing religious rhythms and models of holiness.' Marjet Derks, Radboud University Nijmegen, the Netherlands 'Harris presents a vivid portrait of English grass-roots Catholicism from World War II to the era of John Paul II, drawing on a rich variety of sources, ranging from devotional literature to oral history. Indeed her discussion of 'lived religion' represents a new approach to the history of post-war English religion, and one that ought to be applied to the history of other religious communities too.' Hugh McLeod, University of Birmingham 'Faith in the family is an important new study of the transformation of Roman Catholicism that fills a critical gap in the historical literature on religion in post-war Britain. Painstakingly researched and based on extensive archival evidence, a diverse range of devotional literature, and most significantly, Alana Harris has gathered extensive oral testimony from Manchester to undergird her conclusion that in terms of popular religiosity the 1960s did not mark a rupture, as many historians have argued, but that the story of Catholicism is one of negotiation, adaptation and innovation, which began immediately following the Second World War, largely because gender roles within the family were updated and re-envisioned by both clergy and laity. By convincingly arguing that the Catholic church and particularly its parishioners in the pews, was not merely responding to external social and cultural change, this book presents a strong challenge to those who view the advent of modernity as a process of religious decline. Faith in the family will stand as an important benchmark in British debates about secularisation which hitherto have ignored developments within English Catholicism.' Nancy Christie, The University of Western Ontario -- .