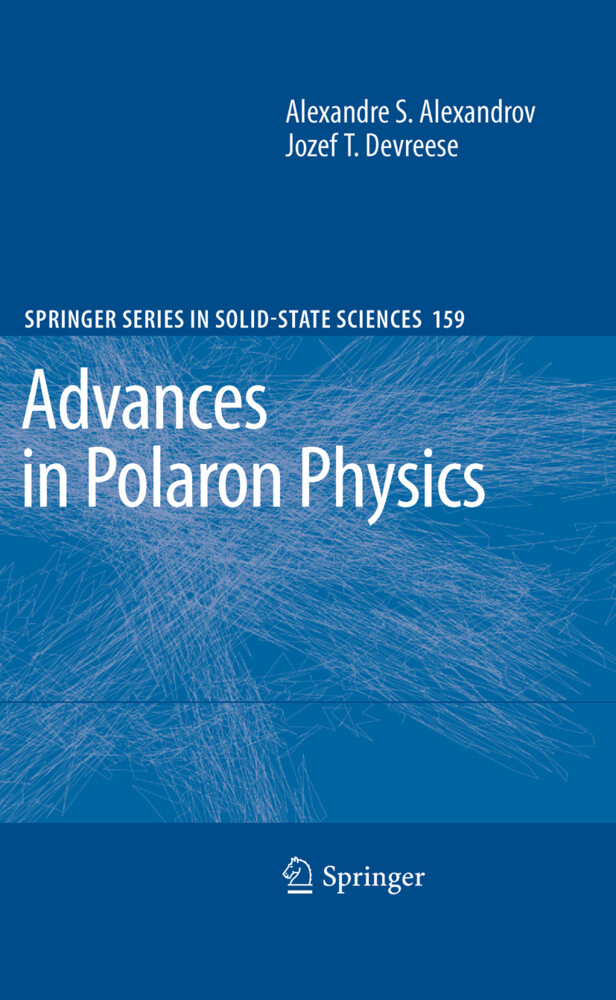 While basic features of polarons were well recognized a long time ago and have been described in a number of review papers and textbooks, interest in the role of electron-phonon interactions and polaron dynamics in di?- ent materials has recently gone through a vigorous revival. Electron-phonon interactions have been shown to be relevant in many inorganic and organic semiconductors and polymers, colossal magnetoresistance oxides, and tra- port through nanowires and quantum dots also often depends on vibronic displacements of ions. These interactions presumably play a role in hi- temperature superconductors as well. The continued interest in polarons extends beyond the physical description of advanced materials. The ?eld has been a testing ground for analytical, semi-analytical, and numerical techniques, such as path integrals, strong-coupling perturbation expansion, advanced variational methods, exact diagonalization, Quantum Monte Carlo, and other techniques. This book reviews some recent developments in the ?eld of polarons, starting with the basics and covering a number of active directions of research. Single- and multipolaron theories have o?ered more insight into colossal magnetoresistance and in a broad spectrum of ph- ical properties of structures with reduced dimension and dimensionality such as transport, optical absorption, Raman scattering, photoluminescence, magneto-optics, etc. While nobody - at present - has a ?nal theory of hi- temperature superconductivity, we discuss one alternative (polaronic) route. We have bene?ted from discussions with many experts in the ?eld.

Alexandre S. Alexandrov received the MSc ( 1st class honour) , Ph.D. and and the highest post-graduate academic degree D.Sc. ("Doktor nauk") in Theoretical Physics from the Moscow Engineering Physics Institute in 1970, 1973 and 1984, respectively. From 1973 to 1990 he was an Associate Professor, Full Professor, Dean of Theoretical and Experimental Physics Faculty, Head of General Physics Department, and a Vice-Rector of the Moscow Engineering Physics Institute, Russia. He was a Visiting Professor at the Rhein-Westfalische Technische Hochschule (RWTH) Aachen, Germany from 1990 to 1992, and a Research Professor at IRC in Superconductivity, Cavendish, University of Cambridge, United Kingdom from 1992 to 1995. In 1995 he was appointed to a chair of Theoretical Physics in the Department of Physics at Loughborough University, UK, where he was the Head of Physics from 1998 to 2001. He is currently Professor of Theoretical Physics in the Department of Physics at Loughborough University. Professor Alexandrov extended the conventional (BCS) theory of superconductivity towards the strong-coupling regime, now known as the bipolaronic superconductivity, proposed a theory of colossal magnetoresistance and a theory of correlated transport through molecular quantum dots, developed the theory of charged Bose-liquids and predicted novel quantum magneto-oscillations in low-dimensional metals and in nanowires. He was the first Mott By-Fellow of Gonville and Caius College (University of Cambridge, UK), and published 6 books, three of them co-authored with the Nobel Prize Laureate Sir Nevill Mott. Professor Alexandrov is a Fellow of the Institute of Physics (IOP, London) and a member of APS. He was Codirector of a NATO Advanced Research Workshop (2003), a Scientific Convenor of the European Science Foundation (ESF) Workshop (2006), a Guest-Editor for special issues of Physica C (2004) and of Journal of Physics: Condensed Matter (2007)

Jozef T. Devreese received his MSc ( magna cum laude) and Ph.D. (maxima cum laude) in Physics from the KULeuven in 1960 and 1964 respectively. From 1961to 1966 he was reasearch Scientist (and Consultant from 1966 till 1980) at the Nuckear Energy Centre (SCK-CEN) in Mol (Belgium).In 1966 he was appointed Lecturer at the University of Antwerp where he became Full Professor in 1969, first appointed to a chair of Applied Mathematics, later as Theoretical Condensed Matter Physicist. He became head of the Physics Department in 1973. In 1977 Prof. Devreese was appointed Visiting Professor at the Eindhoven University of Technology, a position he held till 2002. In 1980 and in 1983 Prof. Devreese was elected as Chairman of the Condensed Matter Division of the European Physical Society for two consecutive three-year periods. In 1971 he organised an International Advanced Study Institute on the Physics of Polarons in Ionic Crystals and in Polar Semiconductors. He was elected as member of the CMD-EPS- Board from 1978 till 2002.Devreese took the initiative for the General Conference of the Condensed Matter Division of EPS and was the chairman of the first such conference organised in Anrwerp in 1980. This initiative resulted in a series of such CMD-EPS General Conferences, the 22th of which is the Rome-2008 Conference . J. Devreese was visiting professor at Lehigh University (PA, USA), The University of Western Ontario (Canada), and was invited as lecturer or seminar speaker at numerous universities and research institutions in the USA and in Europe. He was elected Fellow of the European Physical Society (2006) and the American Physical Society (1990) and as active member of the European Academy of Sciences and Arts (2005). Prof. Devreese's research resulted in contributions to the theory of polarons, bipolarons and excitons in 3D and also in reduced dimensions, reduced dimensionality and in different topologies. He investigated the dynamical response properties of those systems like optical absorption, cyclotron resonance, photoluminescence, Raman-scattering etc Other studies addressed many body problems and superconductivity in mesoscopic systems and in nanostructures. More recently he studied also systems of ultra-cold atoms (bosons and fermions) including the BEC-BCS transition, and vorticity in those systems.In many of those studies the Feynman path integral was a basic mathematical and conceptual tool.