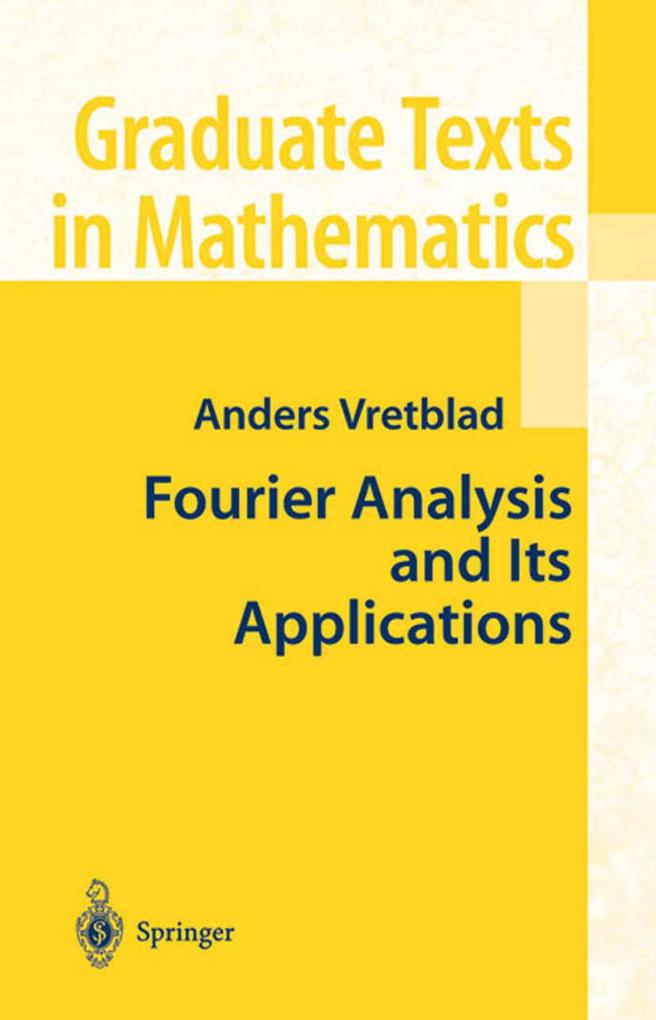 Fourier Analysis and its Applications

von Anders Vretblad
1st ed. 2003. Corr. 2nd printing 2005. 24 Abbildungen. Sprache: Englisch.
Buch (gebunden)
A carefully prepared account of the basic ideas in Fourier analysis and its applications to the study of partial differential equations. The author succeeds to make his exposition accessible to readers with a limited background, for example, those no … weiterlesen
Geschenk per Mail versenden
Buch (gebunden)

A carefully prepared account of the basic ideas in Fourier analysis and its applications to the study of partial differential equations. The author succeeds to make his exposition accessible to readers with a limited background, for example, those not acquainted with the Lebesgue integral. Readers should be familiar with calculus, linear algebra, and complex numbers. At the same time, the author has managed to include discussions of more advanced topics such as the Gibbs phenomenon, distributions, Sturm-Liouville theory, Cesaro summability and multi-dimensional Fourier analysis, topics which one usually does not find in books at this level. A variety of worked examples and exercises will help the readers to apply their newly acquired knowledge.

"This book is one in the Graduate Texts in Mathematics series published by Springer. ... There is a variety of worked examples as well as 350-plus exercises ... . The book is a valuable addition to the literature on Fourier analysis. It is written with more mathematical rigour than many texts ... without being totally opaque to the non-specialist. ... The examples at the end of each chapter are well structured and a reader working through most of them will achieve a good understanding of the topics." (Graham Brindley, The Mathematical Gazette, Vol. 90 (517), 2006)

"The author ... presents the results of his experiences and choices for decades of teaching courses. ... The tables and formulas collected ... are of great service. At the end of each chapter there is a summary section that discusses the results, gives some history, and suggests instructive exercises. We thus have a solid course on Fourier analysis and its applications interesting for students and specialists in engineering as well as for mathematicians. ... I believe that the book will find numerous interested readers." (Elijah Liflyand, Zentralblatt MATH, Vol. 1032 (7), 2004)

"This book is an interesting mixture of a traditional approach ... and a more modern one, emphasizing the role of (tempered) distributions and the application aspects of Fourier analysis. ... The book is certainly highly recommendable for those who want to learn the essence of Fourier analysis in a mathematically correct way without having to go through too much technical details." (H.G. Feichtinger, Monatshefte für Mathematik, Vol. 143 (2), 2004)

"The book is appropriate for an advanced undergraduate or a master's level one-term introductory course on Fourier series with applications to boundary value problems. ... a deep idea is presented in a non-rigorous way both to show the usefulness of the idea and to stimulate interest in further study. ... The book has a good collection of exercises ... . Each chapter ends with both a summary of its main results and methods and historical notes." (Colin C. Graham, Mathematical Reviews, Issue 2004 e)