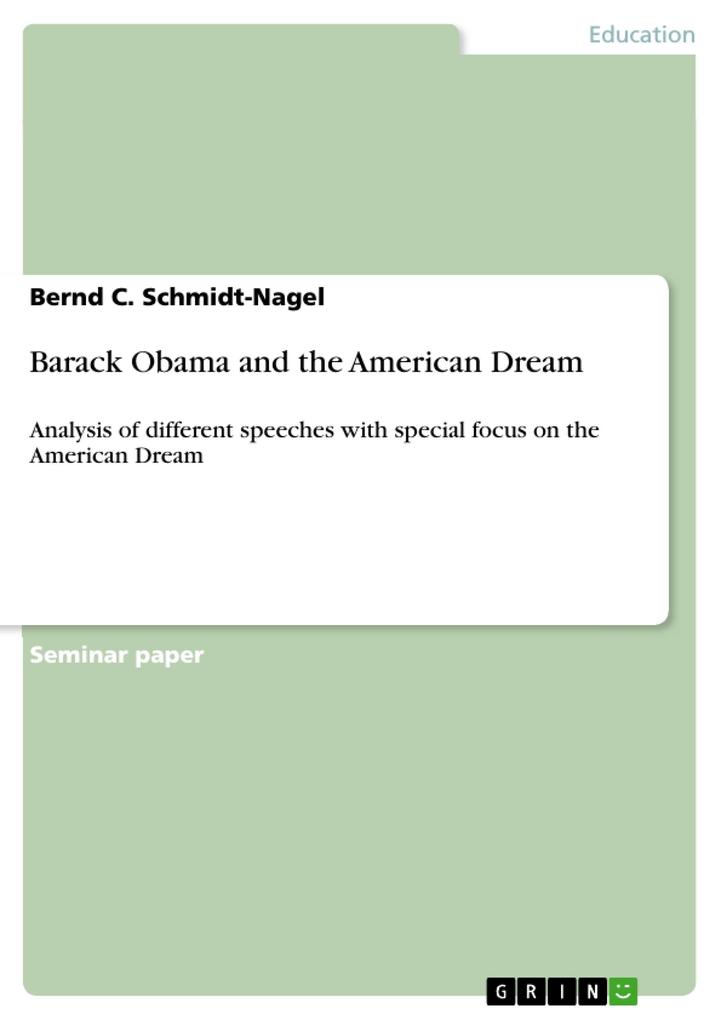 Barack Obama and the American Dream

Seminar paper from the year 2011 in the subject English - Discussion and Essays, grade: 1,7, University of Cologne, language: English, abstract: The acting president of the United States of America, Barack Obama, fascinated millions of US-citizens in many of his campaign speeches in 2008. With his slogan "Yes we can!" he offered them a new, believable perspective.
Finally, this wave of euphoria brought him to the White House and made him, contrary to all expectations, the first black US-President.
I looked fascinated and interested at all important incidents happening in the USA in 2008 and I just wondered why it was possible to this man, like no other person, to fill so many people in this great country with enthusiasm and to give them a new hope of a better future.
Looking back on these events and irrespective of the fact if his goals were achieved or not, I ask myself which values, ideas and aims made the people so absolutely excited and how they were influenced by Obama.
If you only take a superficial view on this issue, it already becomes clear that the very popular American Dream, which is based on American history, is and was one of the important subjects of Obama's speeches.
How Obama uses this Dream and the way he updates and enlarges it should be the central question of this thesis.
In order to do so, it is at first important to take a close look at Barack Obama, his curriculum vitae and his political rising. On the other hand, I want to present the history of the American Dream, as well as a preferably general but handy definition of what the American Dream actually is and what it wants to express.
Based on this, a detailed analysis of certain speeches of Obama with a special focus on the American Dream follows.
Outgoing from the results of the analysis, I will examine how Obama encloses the dream in his way of argumentation, the different values he refers to and the influence of different audiences on the usage of the American Dream.
In order to answer the general question of this thesis, explained above, in a good and suitable way, these points will be synoptically summarized in the conclusion. Of course, it is impossible to take a serious look at all his speeches or to pick up every single aspect of the American Dream coming up during American history, as this would exceed the extent of this essay. Nonetheless, a coherent, objective and differentiated answer to the general question should be the goal and claim of this thesis.