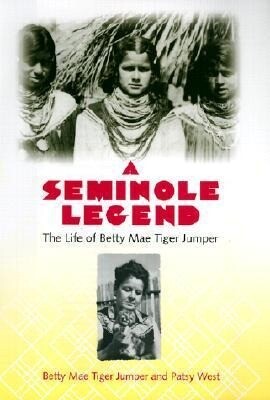 A Seminole Legend: The Life of Betty Mae Tiger Jumper

With A Seminole Legend, Betty Mae Jumper joins the ranks of Native American women who are coming forward to tell their life experiences. This collaboration between Jumper and Patsy West, an ethnohistorian who contributes general tribal history, is a rare and authentic account of a pioneering Florida Seminole family. It will take its place in Seminole literature, historical and anthropological studies, Florida history, women's history, and Native American studies.Betty Mae Tiger was born in 1923 to a Seminole Indian mother and a French trapper father, a fair-skinned half-breed who was nearly put to death at age five by tribal medicine men. Her inspiring autobiography is the story of the most decorated member of the Seminole Tribe of Florida -- a political activist, former nurse, and alligator wrestler, who today has her own web site.Jumper is also a beloved story-teller, renowned for passing along tribal legends. In this book she describes her family's early conversion to Christianity and discusses such topics as miscegenation, war and atrocities, the impact of encroaching settlement on traditional peoples, and the development of the Dania/Hollywood Reservation. She became the first formally educated Florida Seminole, attending a government boarding school in Cherokee, North Carolina, where at age 14 she learned to speak English.

Betty Mae Tiger Jumper, director of communications for the Seminole Tribe of Florida and coauthor of Legends of the Seminoles as Told by Betty Mae Jumper, served from 1967 to 1971 as the Florida Seminole tribal chair, the only Florida Seminole woman ever elected. She has received numerous honors, including a Florida Department of State Folklife Heritage Award and a Doctorate of Humane Letters from Florida State University (both in 1994). In 1997 she received the first Lifetime Achievement Award ever presented by the Native American Journalists Association and was named Woman of the Year by the Florida Commission on the Status of Women. She lives in Hollywood and Big Cypress, Florida. Patsy West, director of the Seminole/Miccosukee Photographic Archive in Ft. Lauderdale, is a noted ethnohistorian and an active preservationist. She has won awards for her historical series "Reflections," published in the Seminole Tribune since 1985, and is the author of The Enduring Seminoles: From Alligator Wrestling to Ecotourism (UPF, 1998), which received the Harry T. and Harriet V. Moore Award for best social and ethnographic history from the Florida Historical Society and a certificate of commendation from the American Association of State and Local Historians.