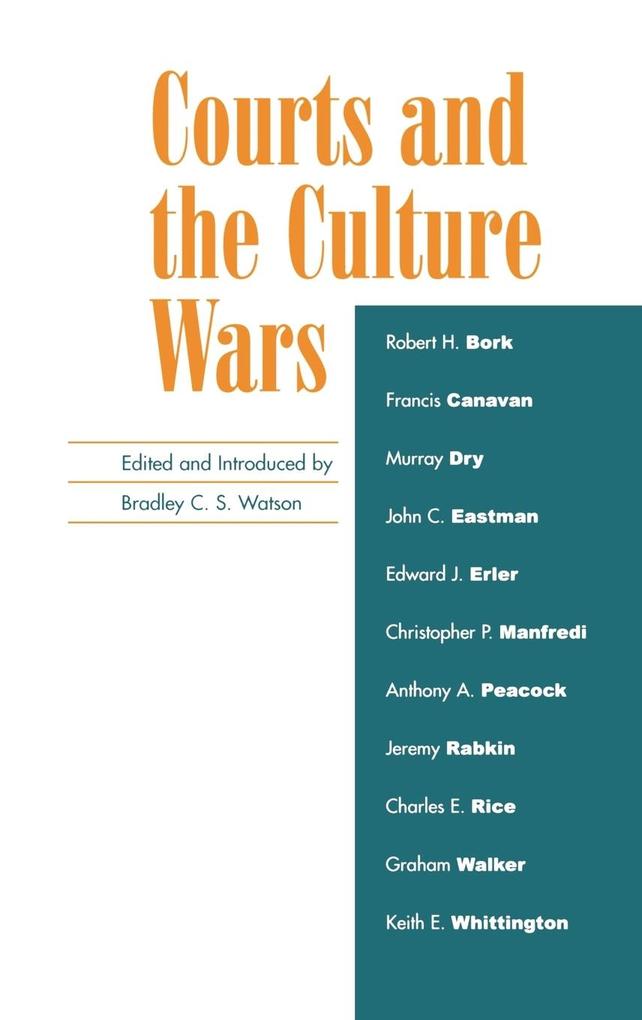 Courts and the Culture Wars

von Bradley C. S. Watson
HC gerader Rücken kaschiert. Sprache: Englisch.
Buch (gebunden)
For much of the second half of the twentieth century, America's courts--state and federal--have injected themselves into what many critics consider to be fundamentally moral or political disputes. By constitutionalizing these disputes, many feel that … weiterlesen
Dieser Artikel ist auch verfügbar als:
Geschenk per Mail versenden
Buch (gebunden)

For much of the second half of the twentieth century, America's courts--state and federal--have injected themselves into what many critics consider to be fundamentally moral or political disputes. By constitutionalizing these disputes, many feel that the courts have reduced the ability of Americans to engage in traditional, political modes of settling differences over issues that excite particular passion. While legal discourse is well suited to choosing decisive winners and losers, political discourse is perhaps more conducive to reasonable compromise and accommodation. In Courts and the Culture Wars Bradley C. S. Watson has brought together some of America's most distinguished names in constitutional theory and practice to consider the impact of judicial engagement in the moral, religious, and cultural realms--including such issues as school prayer, abortion, gay rights, and expressive speech.

Part 1 Introduction: Courting Disaster: Jurisprudence as Moral Philosophy Part 2 Courts and Culture: Fundamental Theoretical Issues Chapter 3 Courts and the Culture Wars Chapter 4 From Ockham to Blackmun: The Philosophical Roots of Liberal Jurisprudence Chapter 5 The Death of the Legal Constitution and the Specter of Judicial Review Part 6 Cultural Controversies and the Courts: Abortion, Homosexuality, Church and State Chapter 7 The Right to Life, the Higher Law, and the Courts Chapter 8 Who Owns the Right to Privacy? Chapter 9 Tolerance and American Constitutionalism: The Case of Gay Rights Chapter 10 Religious Freedom Without Religious Neutrality: Our Once and Future Constitutional Common Sense Part 11 Judicial Practice and the Culture Wars Chapter 12 The One-Way Ratchet and Other Problems of Stare Decisis for Cultural Conservatives Chapter 13 The California Supreme Court in the Culture Wars: A Case Study in Judicial Failure Part 14 Courts, Culture, and Liberal Democracy Chapter 15 Courts, Culture, and Community: Rescuing Constitutional Supremacy from Judicial Supremacy Chapter 16 The Voting Rights Act and the Politics of Multiculturalism: The Challenge to Commercial Republicanism at Century's Turn

Bradley C. S. Watson is Associate Professor of Political Science and Fellow in Politics and Culture in the Center for Economic and Policy Education at Saint Vincent College. He is the author of Civil Rights and the Paradox of Liberal Democracy, (Lexington Books, 1999).

Courts and the Culture Wars casts a spotlight on the role that judges and lawyers have played in undercutting Americans' ability to have a say in setting the conditions under which they live, work and raise their children. These essays by some of the nation's most forthright social critics are lively, provocative, and sobering. -- Mary Ann Glendon, Harvard University