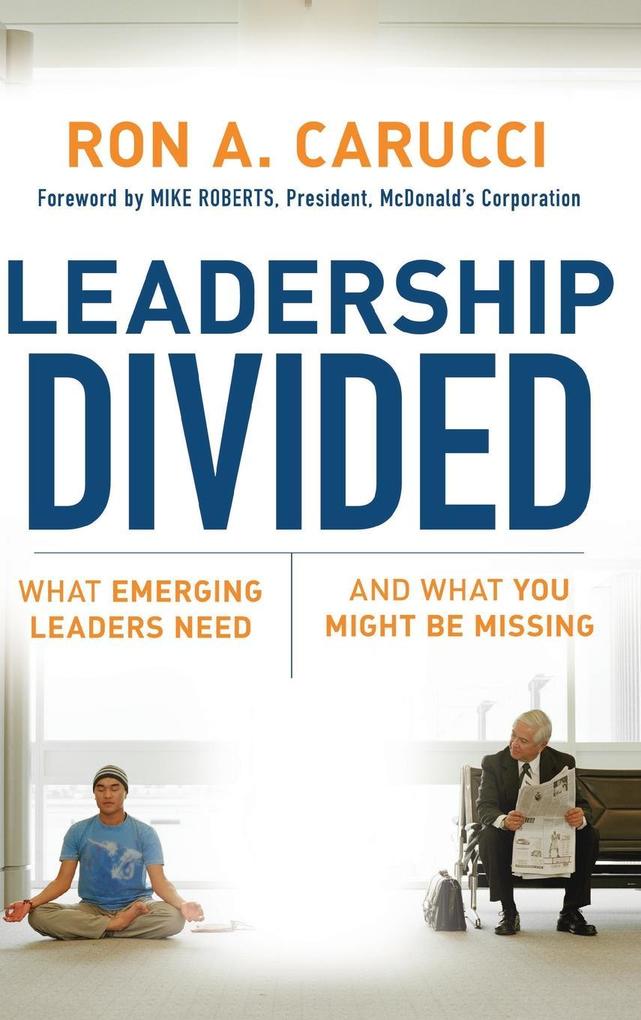 A sea change has taken place throughout the culture of leadership; today s emerging leaders are "opting out" of the same positions their predecessors coveted in ye … weiterlesen
Dieser Artikel ist auch verfügbar als:
Geschenk per Mail versenden
Buch (gebunden)


"Gone are the days when the enterprise agenda could be owned by a few. You need meaningful relationships if you intend to lead well. Leadership Divided will help you create the relationships you need for your organization to succeed. I've known Ron for years, and I know his passion to build successful organizations and effective leaders. You can trust what you will hear in the pages ahead."
--Mike Roberts, president, McDonald's Corporation, From the Introduction

"Reading Leadership Divided is a leadership epiphany. If you are interested in learning to lead justly and humbly, with passion and integrity, read this book."
--Brent Hardaway, chief operating officer, Phase Two Consulting

"At Cadbury Adams, we have worked with Passages Consulting to increase our focus and skill in this area, using many of the concepts in Leadership Divided. Yes, we still work hard to 'make the month,' but now we are better positioned to win the war."
--Brad Irwin, president, Cadbury Adams, U.S.

"I've seen Ron in action--energetic, perceptive, honest, and caring. Next to having Ron around in person, this is the best way to be mentored by him."
--Brian McLaren, best-selling author, A Generous Orthodoxy, and activist (www.brianmclaren.net)

1 A Level Playing Field: The Death of Rank, The Dare of Exposure.

2 A Great Cup of Coffee: The Death of Veneer, The Dare of Depth.

3 A Voice at the Table: The Death of Deception, The Dare of Invitation.

4 An Imaginative Dream: The Death of Monotony, The Dare of Dreaming.

5 A Diamond in Formation: The Death of Arrogance, The Dare of Generosity.

6 A Grateful Champion: The Death of Patronizing, The Dare of Gratitude.

Epilogue: Bridging the Divide; Go First to the Estuary.

Ron A. Carucci is a founding partner with Passages Consulting, LLC, where he works with CEOs and senior executives in pursuit of profound organizational change and executive leadership capability. He is Graduate Professor of Leadership at Mars Hill Graduate School in Seattle. He is also a faculty member at Fordham University, serving as associate professor of organizational behavior, and has served as an adjunct at the Center for Creative Leadership. His clients have included Edward Jones Investments, Bristol-Myers Squibb, Amgen, McDonald's, PepsiCo, Gates Corporation, Accenture, and many others. He is a frequent conference and keynote speaker, addressing a wide variety of audiences.

We all know that leaders are in short supply. And we're all wrong, argues Ron A. Carucci, a consultant and business academic. Carucci sees an abundance of emerging leaders everywhere in organizations. These people have a "deep desire to step up and lead," he writes, but "they have no desire whatsoever to lead as they have been led."
According to Carucci, emerging leaders believe that incumbents are self-aggrandizing workaholics and poor role models who often abuse their power. They are perceived as manipulative, Machiavellian, and devoid of emotional intelligence. By contrast, incumbent leaders feel that the emerging generation is overemotional, undisciplined, and puts too much stock in creativity, teamwork, and consensus. Its members lack the true grit needed to lead the workforce through the upheavals of the twenty-first century.
Carucci's stated and laudable intention is to inspire both sides to start a discussion about leadership. Unfortunately, he undermines his project by siding (sometimes naively) with the emerging generation-for instance, quoting with approval a regional manager who says he would want to be remembered "simply, as the man who put a smile on the face of all who he met." We are a long way here from Jack Welch and Lou Gerstner and even Bill Hewlett and Dave Packard. Not that these leaders had all the answers. But the alternative Carucci favors seems so, well, touchy-feely.
Of course, generational differences have been around for a long time. Yet Carucci argues that there is an unusually wide chasm now between generations, which organizations can't ignore. When emerging leaders were asked whether they would refuse a promotion if their bosses' values were at odds with their own, for example, more than 80% said "absolutely." The consequences for management are hardly trivial.
Can anything be done to bridge the gap? Perhaps the best suggestion comes in the foreword by former McDonald's president Mike Roberts. "I know that vulnerability and hurt-and ultimately, loss-contribute to leadership in ways I can't articulate," he writes, after discussing his daughter's cerebral palsy. Incumbent leaders have something important to learn from Roberts's emotional candor, even though it goes against all their instincts: Opening up could make them better leaders and more appealing to their followers.
Many emerging leaders are still too young to understand how hurt can help them temper unfettered openness with emotional restraint. As they learn to do this better, they may become more balanced leaders and more accessible to the incumbents to whom they must relate. If they meet this challenge, emerging leaders may avoid repeating tomorrow the mistakes of the previous generation that they so roundly condemn today.
-Diane Coutu ( Harvard Business Review , November 2006)
Kunden, die diesen Artikel gekauft haben, kauften auch
Schreiben Sie eine Rezension