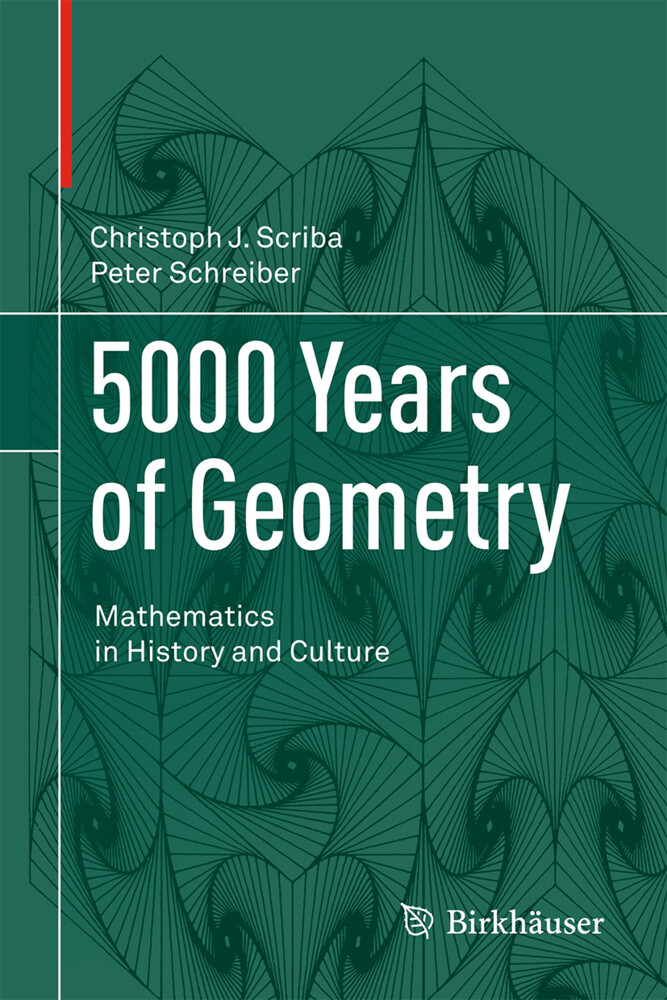 von Christoph J. Scriba, Peter Schreiber
Mathematics in History and Culture. Originaltitel: 5000 Jahre Geometrie. Auflage 2015. 200 schwarz-weiße…
Buch (gebunden)
The present volume provides a fascinating overview of geometrical ideas and perceptions from the earliest cultures to the mathematical and artistic concepts of the 20th century. It is the English translation of the 3rd edition of the well-received Ge … weiterlesen
Dieser Artikel ist auch verfügbar als:
Geschenk per Mail versenden
Buch (gebunden)

The present volume provides a fascinating overview of geometrical ideas and perceptions from the earliest cultures to the mathematical and artistic concepts of the 20th century. It is the English translation of the 3rd edition of the well-received German book "5000 Jahre Geometrie," in which geometry is presented as a chain of developments in cultural history and their interaction with architecture, the visual arts, philosophy, science and engineering.

Geometry originated in the ancient cultures along the Indus and Nile Rivers and in Mesopotamia, experiencing its first "Golden Age" in Ancient Greece. Inspired by the Greek mathematics, a new germ of geometry blossomed in the Islamic civilizations. Through the Oriental influence on Spain, this knowledge later spread to Western Europe. Here, as part of the medieval Quadrivium, the understanding of geometry was deepened, leading to a revival during the Renaissance. Together with parallel achievements in India, China, Japan and the ancient American cultures, the European approaches formed the ideas and branches of geometry we know in the modern age: coordinate methods, analytical geometry, descriptive and projective geometry in the 17th an 18th centuries, axiom systems, geometry as a theory with multiple structures and geometry in computer sciences in the 19th and 20th centuries.

Each chapter of the book starts with a table of key historical and cultural dates and ends with a summary of essential contents of geometr
y in the respective era. Compelling examples invite the reader to further explore the problems of geometry in ancient and modern times.

The book will appeal to mathematicians interested in Geometry and to all readers with an interest in cultural history.

From letters to the authors for the German language edition

I hope it gets a translation, as there is no comparable work.

"Five Thousand Years of Geometry" - I think it is the most handsome book I have ever seen from Springer and the inclusion of so many color plates really improves its appearance dramatically!

An excellent book in every respect. The authors have successfully combined the history of geometry with the general development of culture and history. ...

The graphic design is also excellent.

"The book is highly readable and richly illustrated. This book contains a wealth of geometric and historic information. It also contains a list of references, a list of figures together with their provenances, an index of names, and an index of subjects. ... the book is a well researched history of geometry reference manual and would make a welcome addition to any mathematician's bookshelf." (James J. Tattersall, Mathematical Reviews, December, 2015)

"It is a very good book indeed, and an important and valuable addition to the literature on the subject. ... the book is interesting and well-written, and filled with excellent figures ... . The topic coverage throughout is excellent, and readers should learn a great deal from this book. ... this is an important and valuable book. If you like either geometry or the history of mathematics, take a look at it." (Mark Hunacek, MAA Reviews, June, 2015)