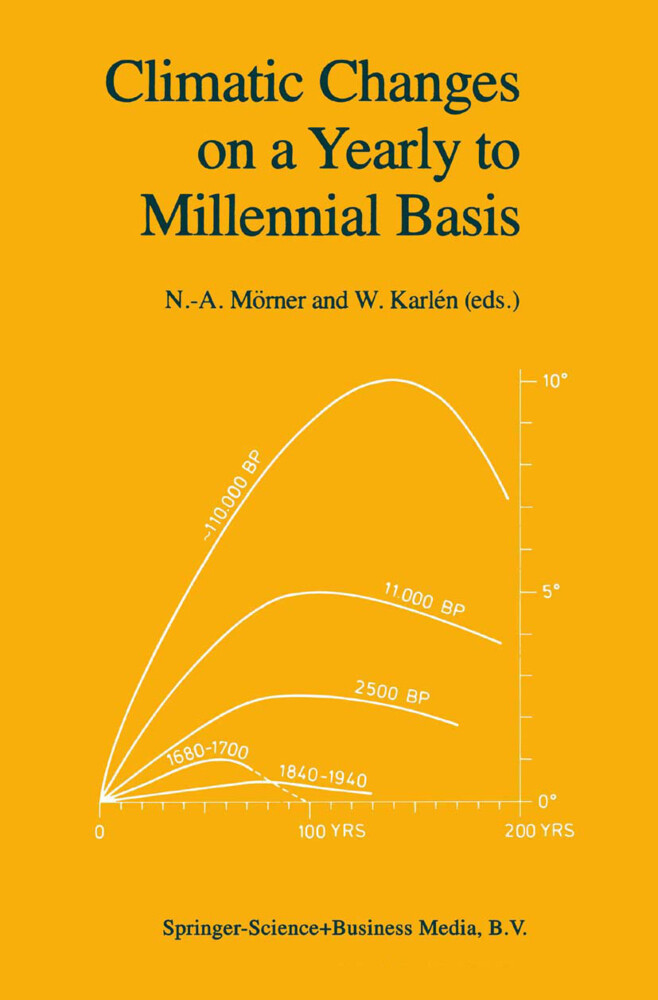 Climatic Changes on a Yearly to Millennial Basis

Titel: Climatic Changes on a Yearly to Millennial Basis

Nils-Axel Marner &Wibjarn Karlen Organizers of the Stockholm Symposium in 1983 Stockholm University, Sweden This book is the Proceedings of the SECOND NORDIC SYMPOSIUM ON CLIMATIC CHANGES AND RELATED PROBLEMS held in Stockholm, Sweden, May 16-20, 1983 (Frydendahl et al., 1983; Marner, 1983). This was "an international interdisciplinary symposium with special refe­ rence to Nordic records and their relation to global climatic changes". The first NORDIC SYMPOSIUM ON CLIMATIC CHANGES AND RELATED PROBLEMS was held in Copenhagen in 1978 ( Frydendahl, 1978) and had a very broad scientific program. The SECOND NORDIC SYMPOSIUM was specifically directed to certain problems, time ranges and sources of information, as discussed below. Scandinavia is a classical area for the study of climatic fluctuations during the last 20,000 years . A major part of the basic data for the international theories and synthesis originate from Scandinavian data. This applies, for example, to: (1) The drastic climatic fluctuations in connection with the re­ cession of the land-ice giving rise to the alternation of inter­ stadials (warm periods with rapid ice recession) and stadials (cold periods with readvances or retardations in the ice recession). (2) The climatic changes during the Holocene with its well-known sub-division according to the Blytt-Sernander system (nowadays being used far outside the boreal region for which it was origi­ nally defined). (3) The Holocene climatic optimum and the subsequent climatic de­ terioration at around 2500 BP (well-established already at the beginning of this century).

Climatic changes on a yearly to millennial basis: An introduction.- Late Weichselian deglaciation and chronostratigraphy of Southern Scandinavia: Problems and present "state of the art".- Biotic response to climatic changes during the time span 13,000-10,000 BP - A case study from SW Sweden.- Climatic changes at Pleistocene/Holocene boundary in the Middle Swedish Endmoraine zone, mainly inferred from stratigraphic indications.- Cyclic lamination in proximal varves reflecting the length of summers during Late Weichsel in southernmost Sweden.- Late Weichselian sea-levels and fauna communities in northern Vendsyssel, Jutland, Denmark.- Flora, fauna and stable isotopes in Late-Würm deposits at Lobsigensee (Swiss Plateau).- Late Weichselian fluctuations in the French Alps and Massif Central from pollen analyses.- Climatic and glacial fluctuations during the Late-Glacial and the Holocene in Oisans (Isere, France).- The classical Late Weichselian climatic fluctuations in Mexico.- Climatic variations in the low continental latitudes during the last 30,000 years.- Late-Glacial - Holocene High-frequency climatic changes in deep-sea cores from the Denmark Strait.- The reflection of abrupt climatic changes in the relief and sequence of continental deposits.- Water-level changes, climate and human impact: A palaeohydrological study of Krageholm Lake (Scania), southern Sweden.- Trees and shrubs in the Shetland Islands. Evidence for a Postglacial climatic optimum?.- Holocene palaeo-winds and climatic changes in West Greenland as indicated by long-distance transported and local pollen in lake sediments.- Peat inception and climatic change in northern Quebec.- The Nile floods as a global climatic/solar proxy.- Rainfall patterns and lake level variations at Lake Chad.- Tropical peats: Hydrogeologic and climatic control.- Causes of a Late-Atlantic swamp-forest submergence in the central Rhine/Meuse delta.- Late Postglacial beach ridges on the island of Gotland, Sweden, as indicators of a probable periodicity in the climate.- Size variations in Atlantic, Subboreal and modern moose teeth.- Climate and history in northern Europe and elsewhere.- Settlement expansion - settlement contraction: A question of war, plague, ecology or climate?.- Climatic reflection in varved lake sediments.- Sunspot cycles and global oscillations.- Dendrochronology in Sweden.- Dendrochronology, mass balance and glacier front fluctuations in northern Sweden.- Dendroclimatological studies at the northern timberline.- Limitations of 14C dates from buried soils in reconstructing glacier variations and Holocene climate.- Climate and glaciation in Kong Karls Land, eastern Svalbard.- Questions arising when using lichen for 14C measurements in climatic studies.- Some studies of the Little Ice Age of recent centuries and its great storms.- The potential of documentary data for the reconstruction of past climates. Early 16th to 19th century. Switzer land as a case study.- A contribution to the reconstruction of weather in central Europe at the end of the 16th century (with regard to me teorological observations of Tycho de Brahe on Hven).- The impact of climate on grass growth and hay yield in Iceland: A.D. 1601 to 1780.- Climatic changes during recent centuries as indicated by dendrochronological studies, Mount Baker, Washington, U.S.A..- The cold winter 1808-1809: A russian force crosses the ice-bound Gulf of Bothnia and takes (the first?) air-temperature measurements in history for purposes of a military operation.- On the availability and homogeneity of instrumentally observed climatological records.- Climate variation in northern Europe during the past century - evidence from a Danish record.- Certain relationships between lake level variations and some climatic factors in Finland.- Long-term variations in some physical parameters of the Baltic Sea.- Strategies for assessing impacts of climatic change in marginal areas.- Mechanism for linking solar activity to weather-scale effects, climatic changes and glaciations in the Northern Hemisphere.- Solar ultraviolet irradiance variations and the Earth's atmosphere.- Cycles of solar flares and weather.- Planetary, solar, atmospheric, hydrospheric, and endogene processes as origin of climatic changes on the Earth.- Planetary periodicities and terrestrial climate stress.- A possible mechanism of abrupt climatic changes.- Sea surface temperature, atmospheric CO2 and the global energy budget: some comparisons between the past and present.- The effect of atmospheric and oceanic energy transports in climatic balance.- Possible CO2-induced warming effects on the cryosphere.- The nature and significance of cloud-cryosphere interactions in the marginal snow and ice zones.- Climatic belts in the case of a unipolar glaciation.- Energy-flow budgets in aquatic ecosystems and the conflict between biology and geophysics about Earth-axis tilt.- Climatic changes on a yearly to millennial basis. Concluding remarks.

`...it is a valuable assemblage of mostly original papers on diverse subjects in late-Quarternary paleoclimatology.'
Earth-Science Reviews, 24 (1987)