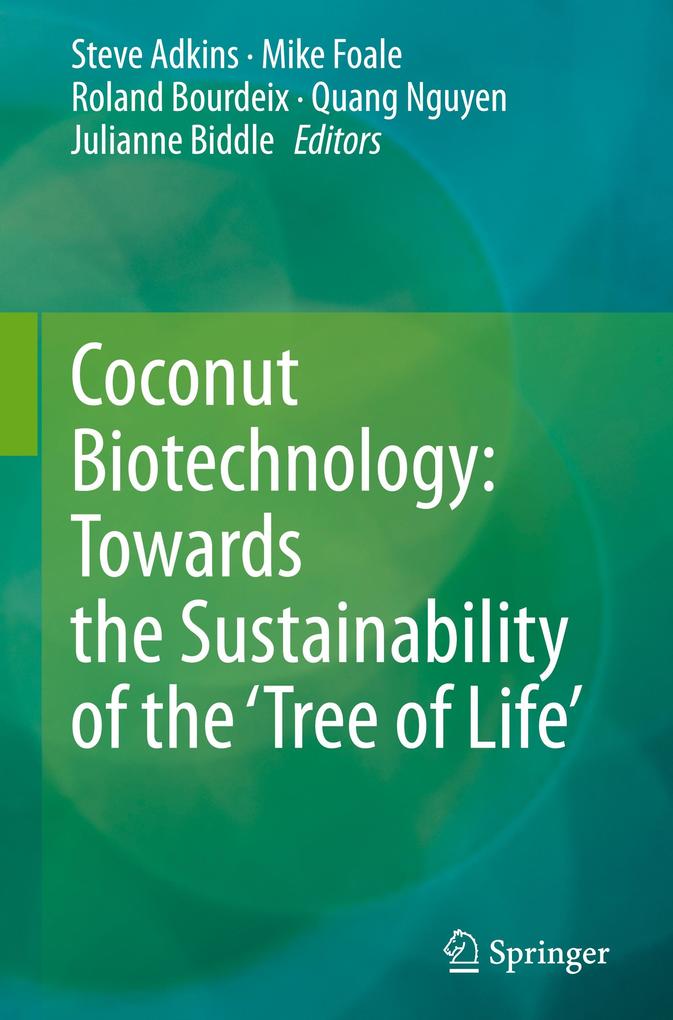 Coconut Biotechnology: Towards the Sustainability of the 'Tree of Life'

Titel: Coconut Biotechnology: Towards the Sustainability of the 'Tree of Life'

Widely known as the 'tree of life', coconut ( Cocos nucifera L.) provides a bountiful source for making a wide variety of healthy foods and industrial items. Its cultivation, however, has been encountering seriously destructive issues including lethal diseases and natural adversities which are currently distressing livelihoods of millions of small-holder farmers around the world. There is an urgent mandate to resolve these issues by meeting sustainable seedling production, facilitating genetic conservation, as well as developing disease identification and modern breeding. This book introduces improvements in coconut biotechnology by covering the advances in micropropagation, germplasm conservation, and molecular pathogenic diagnosis. This comprehensive volume will be a useful source of information and references to researchers, graduate students, agricultural developers, and scholars in the plant sciences. In order to benefit general readers, the book also covers fundamental aspects of biology, diversity, and evolution of this marvelous palm species.

Steve Adkins is a Professor of Plant Physiology at The University of Queensland (UQ). He obtained a degree in Botany and Zoology from the University of London and a PhD in weed physiology from the University of Reading in England in 1981 and has served as a postdoctoral fellow at the University of Saskatchewan, Saskatoon in Canada (1981-84) and at Murdoch University, Perth, Australia (1984-88). He joined UQ in 1988 and has spent the last 30 years studying various tropical and subtropical crops and pastures, their weeds and the native plant community. Steve has held several leadership roles at UQ since 2010, including Deputy Director and Acting Director in the UQ Centre for Plant Architectural Informatics. In these roles, he has led initiatives that have improved teaching quality and the student experience, instituted guidelines and funding schemes for supporting the career development of RHD students and ECRs, and established several new cross-cutting research networks in collaboration with key external partners. He has served as Treasurer and for two terms as the President of the Asian-Pacific Weed Science Society. His research focus is tropical plants especially coconut, and conservation using ex situ seed banking and tissue culture. He has been a principle investigator and scientific advisor on more than 50 scientific projects worth more than $12 million. He has published more than 180 peer reviewed papers in international journals including Proceedings of the National Academy of Sciences, and supervised more than 50 research higher degree and 40 honours students to completion.Mike Foale conducted 10 years of agronomic research into coconut production in the Solomon Island commencing in 1959, as the agronomist of the Joint Coconut Research Scheme shared by Levers Plantations (Unilever) and the Solomons government. The successful Maren hybrid was released in the 1970s. He was also a Coconut Consultant to ACIAR from 1983 until 1992, and later joined the University of Queensland as a Senior Research Fellow specialising in coconut research.Publications include The Coconut Odyssey - ACIAR 2003.Roland Bourdeix, holding a Bachelor in biological sciences, D, R. Bourdeix continued his studies at the University of Paris Sud Orsay up to a Master of Science in the field of Genetics and Plant Breeding. He was then recruited by the French Agricultural Research Centre for International Development (CIRAD). It was the first French student at CIRAD to conduct his doctoral dissertation (Phd) being based permanently in a southern country, Côte d'Ivoire, West Africa. Until 2000 he continued to work in this African country, in the Department of Genetics of the Coconut Research Station "Marc Delorme" from CNRA (National Agricultural Research Center of Côte d'Ivoire). From the 1990s he conducted training activities at the University of Cocody. He also led a number of projects and expert missions in more than thirty countries in the tropics, especially on behalf of Bioversity International and the COGENT (the International Network for Coconut Genetic Resources) which brings together 41 producing countries. The themes of his research has gradually evolved from genetics to a multidisciplinary approach integrating ethnology and multifonctional landscape management. To understand the diversity of crops, we need to look not only for plants but also to humans who cultivate them and their cultural specificities. From 2000 to 2014, he worked on behalf the Coconut Research Programme of CIRAD and the research Unit "Bio cultural interactions" of CEFE (Centre for Evolutionary and Functional Ecology). In 2014, he joined the Research Unit AGAP (Genetic Improvement of Mediterranean and Tropical Plants) and its Scientific Team DDSE (Dynamics of diversity, societies and environments).Quang Thien Nguyen is currently an academic at the School of Biotechnology, International University of Vietnam National University in Ho Chi Minh City. Dr Nguyen has been part of international research projects regarding coconut mass propagation and improvement. Obtained a PhD from the University of Queensland in clonal propagation of elite coconut varieties, Dr Nguyen has been fully committed to the sustainable developement of the `Tree of Life . His research has been published in recognised plant-related research journals, including Planta, Plant Physiology and Biochemistry, and others. Also, he delivered talks at multiple international conferences and provided technical training for needful countries over the past few years. His present endeavour is focused on improving plant tissue culture techniques that enable large-scale and affordable production of coconut planting materials, as well as strategic conservation of elite germplasms.Julianne Biddle grew up on a cattle farm in Central Queensland, Australia and has experience working in science, agriculture, science communication and project management. Dr Biddle has a Doctor of Philosophy in Ecology, Evolution and Genetics from the Australian National University (ANU), Honours in Biochemistry and Molecular Biology and a Bachelor of Science with Advanced Studies, Biochemistry and Molecular Biology, Cell Biology and Biological Sciences. Dr Biddle s most recent research at the University of Queensland has focussed on coconut biotechnology and demand-led plant breeding in Africa. Dr Biddle is newly appointed in the role of Director Multilateral Engagement, Research Strategy, at the Australian Centre for International Agricultural Research (ACIAR) and is also the Alternate Member from Australia on the CGIAR System Council.
Kunden, die diesen Artikel gekauft haben, kauften auch
Schreiben Sie eine Rezension

Schreiben Sie eine Bewertung für: Coconut Biotechnology: Towards the Sustainability of the 'Tree of Life'