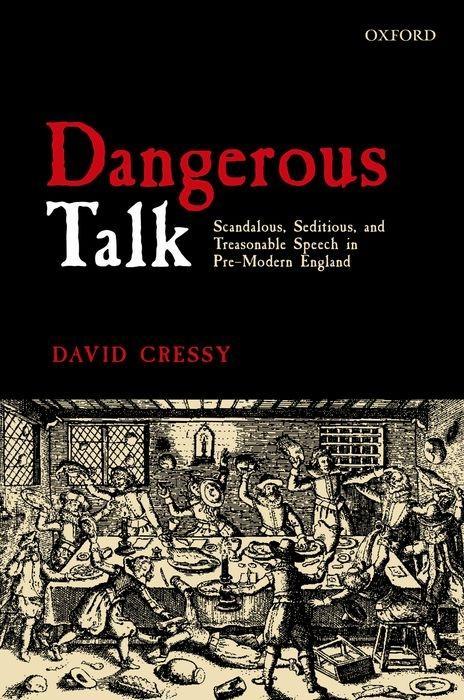 Dangerous Talk traces free speech across five centuries of popular political culture, and shows how scandalous, seditious and treasonable talk finally gained protection as 'the birthright of an Englishman'.

Born in England and educated at Cambridge, David Cressy has made his career in the United States, where he is currently Humanities Distinguished Professor of History at Ohio State University. A social and cultural historian of early modern England, concerned with the intersections of elite and popular culture, central and local government, and official and unofficial religion, he is the author of nine books including Birth, Marriage and Death (1997), Agnes Bowker's
Cat (2001), and England on Edge (2006). A Fellow of the Royal Historical Society, a Guggenheim Fellow, and recipient of fellowships from the National Endowment for the Humanities and the Huntington Library, David Cressy has been a visiting fellow at Churchill College, Cambridge, and at Magdalen, St.
Catherine's and All Souls Colleges, Oxford.

... Readers will come away well informed about just how colourful the language of the English people, at their boldest and most deliberately subversive, has been over the centuries. Anthony Fletcher, Times Literary Supplement Cressy writes in an engaging and accessible style ... If this pioneering survey of an important and neglected subject raises as many questions as it answers, it brings a mass of new information to our attention, and raises issues which future studies of early modern politics and religion will be unable to ignore. Bernard Capp, English Historical Review A splendid catalogue of outspokenness ... this engaging book opens a window into the social history of pre-modern politics. John Spurr, BBC History [Cressy's] meticulous research into unruly tongues touches upon village scandal, bawdy gossip and rumours, with colourful cases ranging from cursing in a Cheshire village to a row between Cambridge academics. Jenny Uglow, Financial Times Scholarly in nature and light in tone, Dangerous Talk is an intriguing glimpse into the private thoughts and public punishment of neighbors in pre-modern England. Lauren Puzier, Marie Antoinette's Gossip Guide to the 18th Century An important and convincing story, and David Cressy makes many useful reflections along the way upon the nature of early modern popular culture. In all respects this is another solid achievement from a reliably good historian. Ronald Hutton, History Another of Professor Cressy's highly original and stimulating studies. Using a wide range of sources...he traces the evolution of free speech in a splendid, highly readable work of history. Northern History,