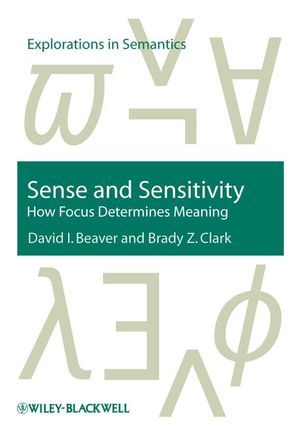 von David I. Beaver, Brady Z. Clark
How Focus Determines Meaning. Sprache: Englisch.
Buch (gebunden)
Sense and Sensitivity explores the semantic and pragmatic effects of focus in natural language discourse. The book concentrates on focus sensitivity, the remarkable dependency some words have on the effects of focus. An example is "only": compare "Sh … weiterlesen
Geschenk per Mail versenden
Buch (gebunden)

Sense and Sensitivity advances a novel research proposal in the nascent field of formal pragmatics, exploring in detail the semantics and pragmatics of focus in natural language discourse. The authors develop a new account of focus sensitivity, and show that what has hitherto been regarded as a uniform phenomenon in fact results from three different mechanisms. The book

Makes a major contribution to ongoing research in the area of focus sensitivity - a field exploring interactions between sound and meaning, specifically the dependency some words have on the effects of focus, such as "she only LIKES me" (i.e. nothing deeper) compared to "she only likes ME" (i.e. nobody else)
Discusses the features of the QFC theory (Quasi association, Free association, and Conventional association), a new account of focus implying a tripartite typology of focus-sensitive expressions
Presents novel cross-linguistic data on focus and focus sensitivity that will be relevant across a range of linguistic sub-fields: semantics and pragmatics, syntax, and intonational phonology
Concludes with a case study of exclusives (like "only"), arguing that the entire existing literature has missed crucial generalizations, and for the first time explaining the focus sensitivity of these expressions in terms of their meaning and discourse function

David I. Beaver is an Associate Professor of Linguistics and Philosophy at the University of Texas at Austin. He is the author of Presupposition and Assertion in Dynamic Semantics (2001); is co- editor of several books, including The Construction of Meaning (2002); has authored numerous articles for prestigious journals including Linguistics and Philosophy and Language; is on the editorial team or board of all the three leading journals in semantics; and is co-founder of a new Open Access journal, Semantics and Pragmatics.
Brady Z. Clark is an Assistant Professor of Linguistics at Northwestern University and a faculty member at the Northwestern Institute on Complex Systems. He is co-editor (with Beaver, Casillas- Martinez, and Kaufmann) of The Construction of Meaning (2002). His many publications range from Semantics to Historical Syntax and Tutorial Dialogue Systems, and include articles in Natural Language Semantics and Language.

"Move over, Austen--and Austin. Prodigiously comprehensive and engagingly presented, Beaver and Clark's rich and subtle study of focus is essential reading on intonational meaning, scalar particles, implicature, presupposition, polarity licensing, and alternative semantics. This is sensitivity training of the highest order." Laurence Horn, Yale University "Sense and Sensitivity merits a close reading by anyone interested in contemporary pragmatic theory. It is clearly written and accessible, and offers a carefully reasoned case for lexical sensitivity to focus. Beaver and Clark's thesis is sure to serve as a touchstone for further work on the subject." Craige Roberts, Ohio State University