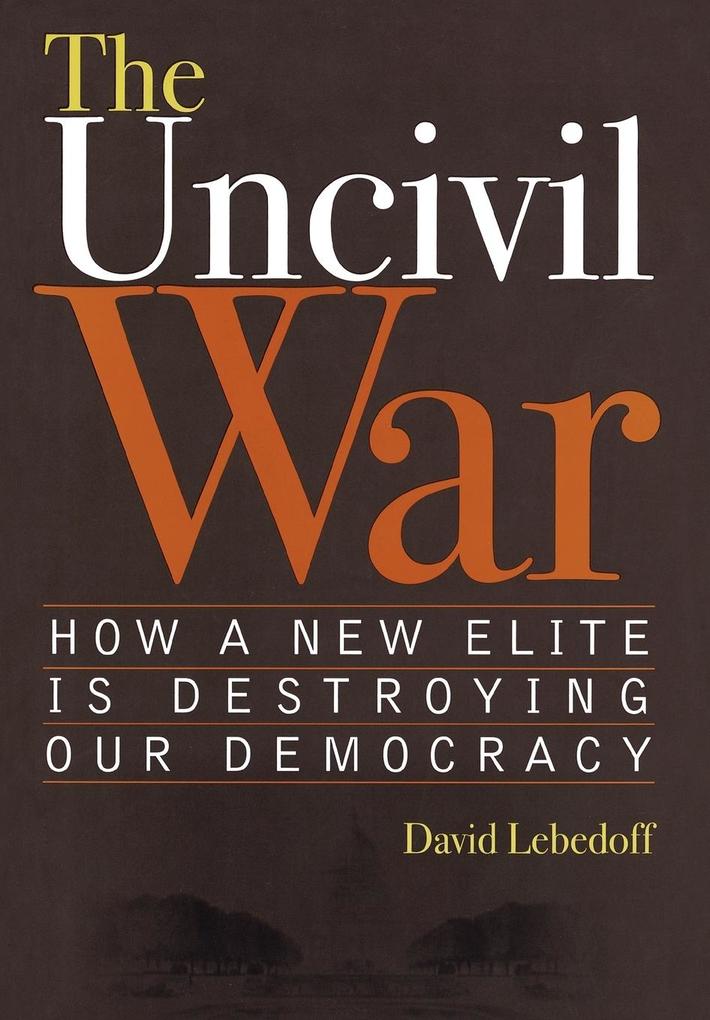 von David Lebedoff
How a New Elite is Destroying Our Democracy. HC gerader Rücken mit Schutzumschlag. Sprache: Englisch.
Buch (gebunden)
This controversial book describes how the New Elite-a self-selected class whose members believe they know what's good for the rest of us-has been systematically attacking our tradition of majority rule. The capture of our political parties by extremi … weiterlesen
Geschenk per Mail versenden
Buch (gebunden)

This controversial book describes how the New Elite-a self-selected class whose members believe they know what's good for the rest of us-has been systematically attacking our tradition of majority rule. The capture of our political parties by extremists, campaigns based on anger rather than issues, laws created by unelected judges, congressmen immune from defeat, and an alienated and ignored electorate-all these represent a calculated effort of a new class to replace the public will with its own. Who are the New Elite? They are, Lebedoff asserts, the self-proclaimed "smartest people in the land," a test-score "meritocracy" that believes that the consent of the governed has been made obsolete by the SAT. If presidential hopefuls such as Howard Dean appear to represent this new class, or to disdain traditional values, he will be rejected by a public less fearful of Bush's ties to the elite of wealth than by dominance of the anti-democratic new elite. The New Elite is as much about perception as substance, Lebedoff further claims, citing Al Gore's defeat to George Bush as representative of the rejection of someone who sounded like a member of the new class. Dean faces the same problem-maybe more so, because the real fight is not between liberals and conservatives but between those who believe in majority rule and those who believe in rule by experts. By revealing the causes of our retreat from democracy, The Uncivil War helps us learn how to regain the right to govern ourselves.

David Lebedoff is the author of numerous articles and several books of social and political commentary, including The New Elite. He lives in Minneapolis.

Mr. David Lebedoff addresses here an issue as timely as the front page of your daily newspaper and as ancient as Aristotle: 'Who makes the laws?' Aristotle observes that a polity can have government by the one, the few, or the many, and that the conflict over which is to prevail creates permanent instability. The ensuing history of Europe amply demonstrated this. In 1787, the American founders tried to solve the problem of perpetual instability through their theory of mixed government, but, finally, they made 'We the People' the first three words of the Constitution, the basis for the laws. The sense of the people, in order to be deliberate was to be filtered through the constitutional process. But We the People finally wrote the laws. The founders, after all, had just won a revolution against government by the one. Their founding principle is now under assault by an effort to establish "government by the few," government by law school graduates being one expression of this. Mr. Lebedoff offers here a profound analysis of how this has come to pass.--Jeffrey Hart