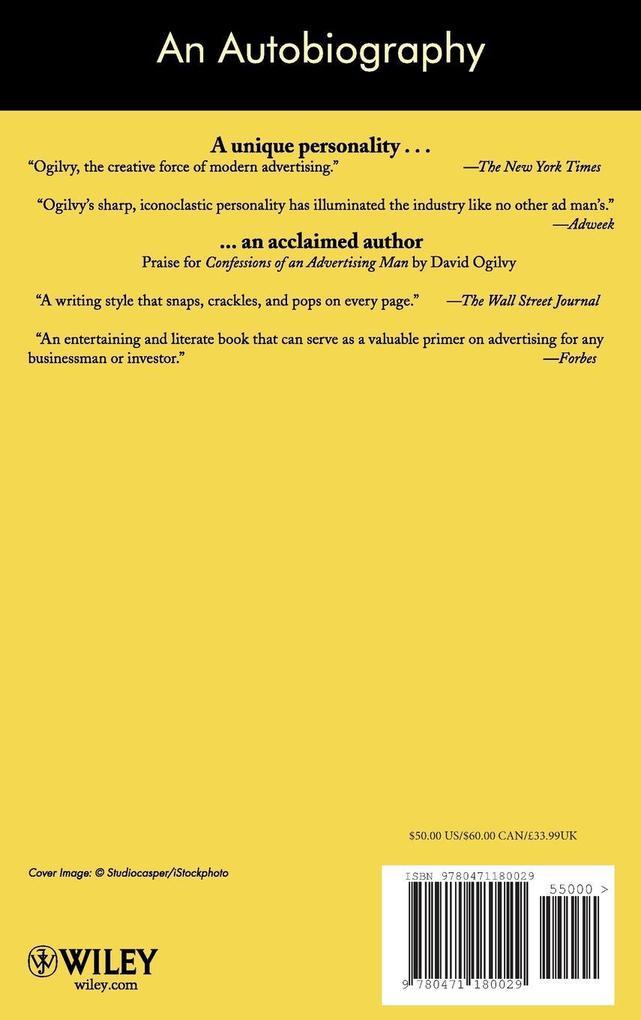 von David Ogilvy
HC gerader Rücken kaschiert. Sprache: Englisch.
Buch (gebunden)
Whatever David Ogilvy may have lacked in money and credentials, he more than made up for with intelligence, talent, and ingenuity. He became the quintessential ad man, a revolutionary whose impact on his profession still reverberates today. His brill … weiterlesen
Geschenk per Mail versenden
Buch (gebunden)

Whatever David Ogilvy may have lacked in money and credentials, he more than made up for with intelligence, talent, and ingenuity. He became the quintessential ad man, a revolutionary whose impact on his profession still reverberates today. His brilliant campaigns went beyond successful advertising, giving rise to such pop culture icons as the famous Hathaway shirt man with his trademark black eyepatch. His client list runs the gamut from Rolls Royce to Sears Roebuck, Campbell's Soup to Merrill Lynch, IBM to the governments of Britain, France, and the United States. Born in 1911, David Ogilvy spent his first years in Surrey (Beatrix Potter's uncle lived next door, and his niece was a frequent visitor). His father was a classical scholar who had played rugby for Cambridge. "My father ... did his best to make me as strong and brainy as himself. When I was six, he required that I should drink a tumbler of raw blood every day. When that brought no result, he tried beer. To strengthen my mental faculties, he ordered that I should eat calves' brains three times a week. Blood, brains, and beer: a noble experiment". Before marrying, his mother had been a medical student. When World War I brought economic disaster to the family, they were forced to move in with relatives in London. Scholarships to boarding school and Oxford followed, and then, fleeing academia, Ogilvy set out on the at times surprising, at times rocky road to worldwide recognition and success. His remarkable journey would lead the ambitious young man to America where, with George Gallup, he ran a polling service for the likes of Darryl Zanuck and David O. Selznick in Hollywood; to Pennsylvania, where he became enamored with the Amish farming community; and back to England to work for British Intelligence with Sir William Stephenson. Along the way, with the help of his brother, David Ogilvy secured a job with Mather and Crowther, a London advertising agency. The rest is history.

Sweet Master. I Become a Chef in Paris. New York and Hollywood. Secret Service. A Very Large Rural Monastery. Fame and Fortune. The Light at the End of the Tunnel. A Forest Full of Surprises. List of Clients. Index.

DAVID OGILVY is the founder of Ogilvy & Mather, one of the top ten advertising agencies in the world. Mr. Ogilvy lives at the Chateau de Touffou in Bonnes, France.