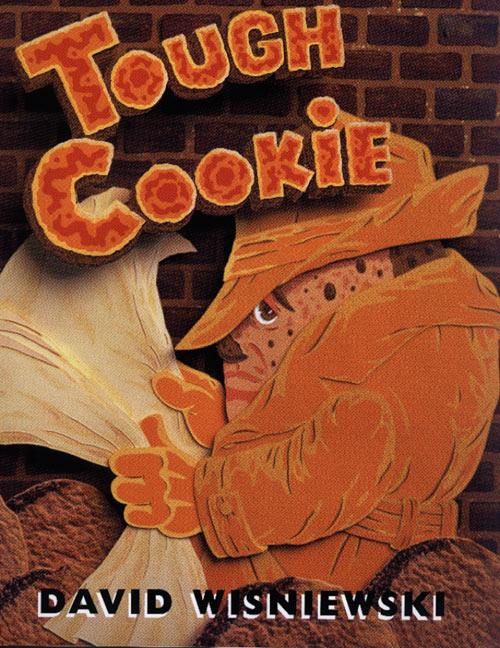 von David Wisniewski
Empfohlen von 4 bis 8 Jahren. Sprache: Englisch.
Buch (gebunden)
Sam Spade, move over! In his years on the force, Tough Cookie Busted the Ginger Snaps and broke up the Macaroons. Now living as a private eye at the bottom of the cookie jar, he learns that Fingers has gotten his old partner, Chips. With his best gir … weiterlesen
Geschenk per Mail versenden
Buch (gebunden)

Sam Spade, move over! In his years on the force, Tough Cookie Busted the Ginger Snaps and broke up the Macaroons. Now living as a private eye at the bottom of the cookie jar, he learns that Fingers has gotten his old partner, Chips. With his best girl, Pecan Sandy, at his side, Tough Cookie sets out to put Fingers away, for keeps! This hilarious spoof will have readers rolling in the aisles. 00-01 Keystone to Reading Book Award Masterlist

David Wisniewski passed away in his sleep, from an unknown illness, on September 11, 2002. Born in 1953, he had all-too-brief a life and leaves behind his lovely wife, Donna, and their two children, Ariana and Alexander.
Just this week David had seen the finished books for Halloweenies, and he was so happy with how it turned out.
He will, of course, be remembered as the 1997 Caldecott Medalist for his 6th book, The Golem. But perhaps even more, he'll be known for his off-beat postmodern humor, seen in Tough Cookie, The Secret Knowledge of Grown-Ups, and Halloweenies. Everyone who knew him loved his wit and his vibrancy; he was also quite an inspirational speaker. We will miss him.
In His Own Words:
My mom taught me to draw in first grade. Nothing fancy. Just how to put circles and ovals together for form "bubble men." It was a wonderful introduction to drawing and a terrific gateway to action and proportion. But third grade, I was one of the class artists.
That's when I started reading comic books, especialy the Marvel superheroes created by Stan Lee. My sketchpads became full of The Fantastic Four, Spider-man, The Mighty Thor, and X-Men. Comic books were also my first introduction to dynamic storytelling. Nothing's more dramatic than colossal struggles between good and evil with entire galaxies at stake!
This enthusiasm led directly to Classic Comics, simplified versions of fantasy masterpieces like Jules Verne's Twenty Thousand Leagues Under the Sea and H.G. Wells' The War of the Worlds. It wasn't long before I became an avid reader, willing to tackle the work of Ray Bradbury, Robert Heinlein, and A.E. van Vogt.
During high school I became interested in the performing arts as well as the visual When I couldn't afford more than one semester of college, I signed up for the Ringling Bros. and Barnum & Bailey Clown College. After training for two months, I clowned with Ringling for two seasons (1973-74), then performed with the country's largest tent show, Circus Vargas, in 1975.
After the circus, I was hired by my future wife, Donna, to perform with a puppet theatre. We married in 1976 and started our own company, Clarion Shadow Theatre, in 1980. Shadow puppetry was our specialty, wherein flat, jointed figures move against a screen illuminated with rear-projected scenery. Although I didn't know it at the time, shadow puppetry trained me to do picture books. Cutting out shadow puppets and projected scenery taught me how to use an X-Acto knife. The shadow screen was the same shape as an open book. Adapting legends and folktales into scripts taught me how to write.
When our chidren - Ariana and Alexander - were born, touring became impossible, so I adapted my cutting skills to illustration. After four years of freelancing for newspapers and magazines, I created my first picture book. The Warrior and the Wise Man (1989) looks very much like a shadow puppet play.
My cut-paper style matured with ensuing books. I learned to construct more detailed people and scenery, plus how to layer the artwork, creating the shadows that give depth to the pages. Happily, my books have been well received, culminating in the 1997 Caldecott Medal for Golem.
After six epic adventures, I wanted to try something comedic that would draw on my circus and puppet theatre experience. The Secret Knowledge of Grown-ups was the result, a silly conspiracy spoof about the real reasons why parents tell kids to do things.