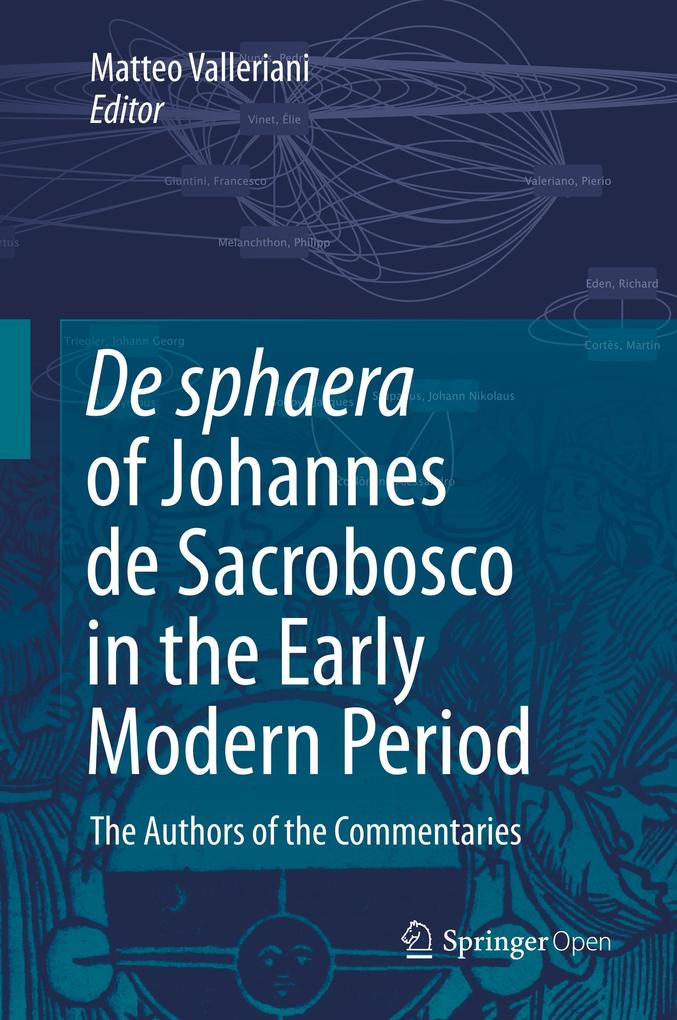 The Authors of the Commentaries. 1st ed. 2020. 8 SW-Abbildungen, 48 Farbabb. HC runder Rücken kaschiert.…
Buch (gebunden)
This open access book explores commentaries on an influential text of pre-Copernican astronomy in Europe. It features essays that take a close look at key intellectuals and how they engaged with the main ideas of this qualitative introduction to geoc … weiterlesen
Geschenk per Mail versenden
Buch (gebunden)

This open access book explores commentaries on an influential text of pre-Copernican astronomy in Europe. It features essays that take a close look at key intellectuals and how they engaged with the main ideas of this qualitative introduction to geocentric cosmology.


Johannes de Sacrobosco compiled his Tractatus de sphaera during the thirteenth century in the frame of his teaching activities at the then recently founded University of Paris. It soon became a mandatory text all over Europe. As a result, a tradition of commentaries to the text was soon established and flourished until the second half of the 17th century. Here, readers will find an informative overview of these commentaries complete with a rich context. The essays explore the educational and social backgrounds of the writers. They also detail how their careers developed after the publication of their commentaries, the institutions and patrons they were affiliated with, what their agenda was, and whether and how they actually accomplished it.


The editor of this collection considers these scientific commentaries as genuine scientific works. The contributors investigate them here not only in reference to the work on which it comments but also, and especially, as independent scientific contributions that are socially, institutionally, and intellectually contextualized around their authors.

Prof. Dr. Matteo Valleriani is research group leader of Department I at the Max Planck Institute for the History of Science in Berlin and Honorary Professor at the Technische Universität of Berlin. He investigates the relation between diffusion processes of scientific knowledge, practical and technological knowledge as well as their economic and political preconditions. In particular, his research focuses on the Hellenistic period, the late Middle Ages and the Early Modern Times. Among his principal research endeavors, Matteo Valleriani, leads the project "The Sphere. Knowledge System Evolution and the Shared Scientific Identity of Europe" (https://sphaera.mpiwg-berlin.mpg.de), which investigates the formation and evolution of the shared scientific identity in Europe between the 13th and the 17th century.

"The volume offers an excellent overview of authors and geographical regions whose contribution considerably, and in different ways, enlarged the content of this medieval booklet as well as the initiation to astronomy that it offered to European students and the general public. ... The reader of this excellent book can now follow this path, choosing his or her own itinerary thanks to the synergy it allows through the digital reproductions of the editions of the Sphaera ... ." (Miguel Ángel Granada, Journal for the History of Astronomy, Vol. 52 (3), August, 2021)
Kunden, die diesen Artikel gekauft haben, kauften auch
Schreiben Sie eine Rezension