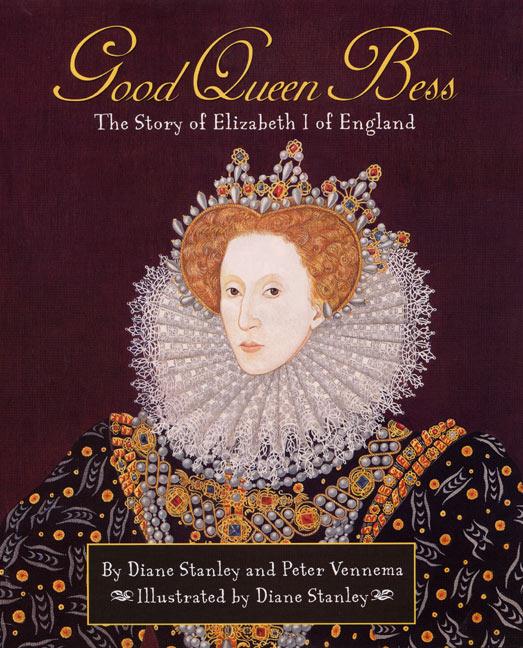 Good Queen Bess: The Story of Elizabeth 1 of English

In this welcome reissue, celebrated author and illustrator Diane Stanley and her husband, Peter Vennema, paint an impressive portrait of the remarkable queen who loved her people so dearly and ruled them so well. Elizabeth's forceful personality, colorful court, and devoted subjects come vividly to life in this stellar picture-book biography. This nonfiction picture book is an excellent choice to share during homeschooling, in particular for children ages 6 to 8. It's a fun way to learn to read and as a supplement for activity books for children.
When it was first published, Good Queen Bess was named a Notable Book in the Field of Social Studies, an American Library Association Notable Book, a Booklist Editors' Choice, an American Bookseller Pick of the Lists, a Boston Globe-Horn Book Honor Book, and an IRA Teachers' Choice.

Diane Stanley is the author and illustrator of beloved books for young readers, including The Silver Bowl, which received three starred reviews, was named a best book of the year by Kirkus Reviews and Book Links Lasting Connections, and was an ALA Booklist Editors' Choice; The Cup and the Crown; Saving Sky, winner of the Arab American Museum's Arab American Book Award and a Bank Street College of Education Best Book of the Year; Bella at Midnight, a School Library Journal Best Book of the Year and an ALA Booklist Editors' Choice; The Mysterious Case of the Allbright Academy; The Mysterious Matter of I. M. Fine; and A Time Apart. Well known as the author and illustrator of award-winning picture-book biographies, she is the recipient of the Orbis Pictus Award for Outstanding Nonfiction for Children and the Washington Post-Children's Book Guild Nonfiction Award for her body of work.
Ms. Stanley has also written and illustrated numerous picture books, including three creatively reimagined fairy tales: The Giant and the Beanstalk, Goldie and the Three Bears, and Rumpelstiltskin's Daughter. She lives in Santa Fe, New Mexico. dianestanleybooks.com.