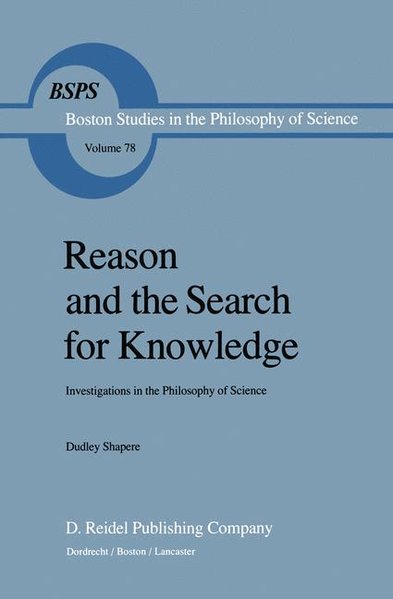 Reason and the Search for Knowledge

von Dudley Shapere
Investigations in the Philosophy of Science. 'Boston Studies in the Philosophy of Science'. Auflage 1984.…
Buch (gebunden)
An impressive characteristic of Dudley Shapere's studies in the philosophy of the sciences has been his dogged reasonableness. He sorts things out, with logical care and mastery of the materials, and with an epistemological curiosity for the historic … weiterlesen
Geschenk per Mail versenden
Buch (gebunden)

Titel: Reason and the Search for Knowledge
Autor/en: Dudley Shapere

An impressive characteristic of Dudley Shapere's studies in the philosophy of the sciences has been his dogged reasonableness. He sorts things out, with logical care and mastery of the materials, and with an epistemological curiosity for the historical happenings which is both critical and respectful. Science changes, and the philosopher had better not link philosophical standards too tightly to either the latest orthodox or the provocative up­ start in scientific fashions; and yet, as critic, the philosopher must not only master the sciences but also explicate their meanings, not those of a cognitive never-never land. Neither dreamer nor pedant, Professor Shapere has been able to practice the modern empiricist's exercises with the sober and stimulat­ ing results shown in this volume: he sees that he can be faithful to philosoph­ ical analysis, engage in the boldest 'rational reconstruction' of theories and experimental measurements, and faithful too, empirically faithful we may say, to both the direct super-highways and the winding pathways of conceptual evolutions and metaphysical revolutions. Not least, Shapere listens! To Einstein and Calileo of course, but to the workings of the engineers and the scientific apprentices too, and to the various philosophers, now and of old, who have also worked to make sense of what has been learned and how that has happened and where we might go wrong.

I. Critical Papers.- 1: Philosophy and the Analysis of Language.- 2: Mathematical Ideals and Metaphysical Concepts.- 3: The Structure of Scientific Revolutions.- 4: The Paradigm Concept.- 5: Meaning and Scientific Change.- 6: Notes Toward a Post-Positivistic Interpretation of Science, Part I.- II. Analyses of Issues.- 7: Space, Time, and Language.- 8: Interpretations of Science in America.- 9: Unity and Method in Contemporary Science.- 10: What Can the Theory of Knowledge Learn from the History of Knowledge?.- III. Toward a Systematic Philosophy of Science.- 11: The Character of Scientific Change.- 12: The Scope and Limits of Scientific Change.- 13: Scientific Theories and Their Domains.- 14: Remarks on the Concepts of Domain and Field.- 15: Alteration of Goals and Language in the Development of Science.- 16: The Concept of Observation in Science and Philosophy (Summary version).- 17: Notes Toward a Post-Positivistic Interpretation of Science, Part II.- 18: Reason, Reference, and the Quest for Knowledge.- 19: Modern Science and the Philosophical Tradition.- List Of Publications.- Index Of Names.- Index Of Topics.