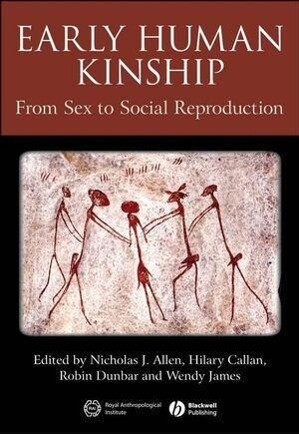 Early Human Kinship brings together original studies from leading figures in the biological sciences, social anthropology, archaeology, and linguistics to provide a major breakthrough in the debate over human evolution and the nature of society.

A major new collaboration between specialists across the range of the human sciences including evolutionary biology and psychology; social/cultural anthropology; archaeology and linguistics
Provides a ground-breaking set of original studies offering a new perspective on early human history
Debates fundamental questions about early human society: Was there a connection between the beginnings of language and the beginnings of organized kinship and marriage ? How far did evolutionary selection favor gender and generation as principles for regulating social relations?
Sponsored by the Royal Anthropological Institute of Great Britain and Ireland in conjunction with the British Academy

Nicholas J. Allen is Emeritus Fellow of Wolfson College, University of Oxford. He has published on the Himalayas, kinship theory, the Durkheimian School and Indo-European Comparativism. His books include Categories and Classifications (2000) and Marcel Mauss: A Centenary Tribute (1998). Hilary Callan has been Director of the Royal Anthropological Institute of Great Britain and Ireland since 2000. Her research and publications include work on biological and social anthropology, occupational cultures, and gender, including Ethology and Society (1970)and The Incorporated Wife (edited with Shirley Ardener, 1984). Wendy James was until recently Professor of Social Anthropology at the University of Oxford, and is now Emeritus Fellow of St Cross College, Oxford. She has carried out ethnographic research in North East Africa, and her books include War and Survival in Sudan's Frontierlands: Voices from the Blue Nile (2007) and The Ceremonial Animal: A New Portrait of Anthropology (2003). Robin Dunbar is Professor of Evolutionary Anthropology, University of Oxford, and specializes in primate behaviour. He is co-director of the British Academy's Centenary Research Project ('From Lucy to Language: The Archaeology of the Social Brain'). He is the author or co-author of numerous books, including The Human Story (2004) and Evolutionary Psychology: A Beginner's Guide (2005).

"This is an important and timely volume, which in its multiple approaches brings new questions to bear on a topic that is the bedrock of anthropology."
Stanley Ulijaszek, University of Oxford

"An international collection of leading figures in paleontology, linguistics, geography and anthropology consider the transition from the biological kinship of primates to social kinship of modern humans which also marks the transition to language and the social control of the environment."
R.H. Barnes, University of Oxford

"For too long, studies of the cultural and the genetic aspects of kinship have proceeded in isolation from one another. This volume marks the beginning of what promises to be a fruitful conversation between evolutionary biology and social anthropology."
Daniel Nettle, Newcastle University

"Early Human Kinship brings together exciting new perspectives from a range of human sciences. Useful for teaching, it will also encourage further cross-disciplinary research into the origins of human kinship, and therefore of humanity itself."
Robert Parkin, University of Oxford

"This important book puts the study of kinship back in the center of deep history-exactly where nineteenth century anthropology first found it. Welcome back!"
Thomas Trautmann, University of Michigan

"In the middle of last century, Lévi-Strauss advanced that our ancestors came out of their animal state as the result of two "big bangs". Symbolic thinking and language, he claimed, suddenly appeared, and humans were then able to leave off bedding their sisters or their daughters, and instead exchange them for other men's daughters. Thus the incest taboo and male domination were sufficient to promote our ancestors from a state of nature to one of culture. Today the authors of Early Human Kinship show that these "big bangs" never happened and that the ancestors of modern humans shook off their original animal state through a series of transformations that began with the appearance of Homo erectus and the domestication of fire (500,000 BP). It was above all the development of our ancestors' cognitive capacities that enabled them to imagine and gradually to put into practice various social forms of sexual intercourse and to decide that the children born of these unions belonged to a given group of adults considered to be their kin. Kinship relations have always formed systems, but they have never been the only founding principle of any society."
Maurice Godelier, École des Hautes Études en Sciences Sociales