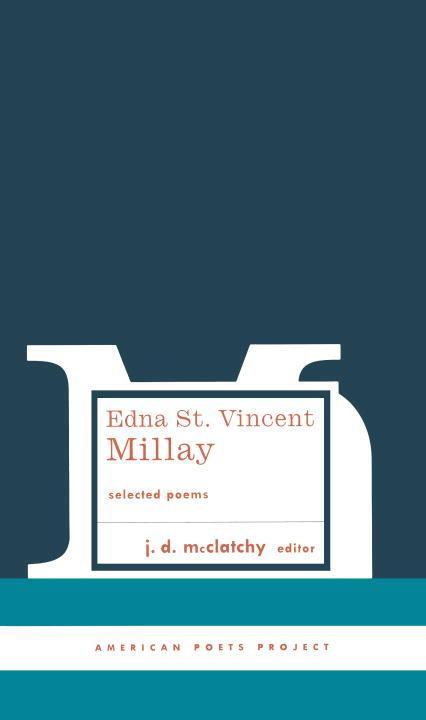 Praised by poets and critics ranging from A. E. Housman and Thomas Hardy to Edmund Wilson, Edna St. Vincent Millay's bold, exquisite poems take their place among the enduring verse of the twentieth century. Claiming a lyric tradition stretching back to Sappho and Catullus and making it very much her own, Millay won over her contemporaries-and readers ever since-with her passion, erotic candor, formal elegance, and often mischievous wit. J. D. McClatchy's introduction and selections offer new and surprising insights into Millay's achievement. Included are her most beloved and justly admired poems, such as the wry bohemian anthem "Recuerdo" and the sonnet sequence Fatal Interview, the poetic record of a love affair that is presented in its entirety. McClatchy has also chosen works that extend our sense of Millay's range: translations, her play Aria da Capo, and excerpts from her libretto The King's Henchman. "I have for the most part been guided by my taste for Millay at her tautest and truest," writes McClatchy. "There are precise and resonant images everywhere."

Edna St. Vincent Millay was born in 1892 in Rockland, Maine, and grew up in the seaside town of Camden. In 1923 Millay received the second annual Pulitzer Prize for Poetry. Millay published five more collections of poetry; a prose collection under her pen name, Nancy Boyd; a translation; two verse dramas; and several plays. She died in 1950.J. D. McClatchy (1945-2018) was the author of many books of poetry and essays, including Plundered Hearts: New and Selected Poems (2014), and the editor of nine Library of America publications. He wrote the libretto for Ned Rorem's operatic version of Our Town, taught at Yale University, and served as editor of The Yale Review.