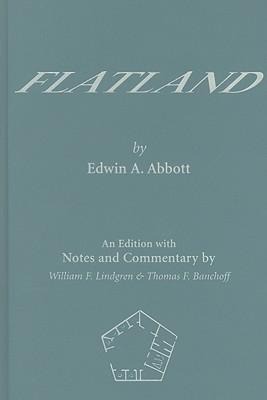 Flatland: An Edition with Notes and Commentary

A fully annotated edition of Abbott's classic Flatland with notes and commentary putting it in its historical and mathematical context.

Introduction William F. Lindgren and Thomas F. Banchoff; Part I. This World: 1. Of the nature of Flatland; 2. Of the climate and houses in Flatland; 3. Concerning the inhabitants of Flatland; 4. Concerning the women; 5. Of our methods of recognizing one another; 6. Of recognition by sight; 7. Concerning irregular figures; 8. Of the ancient practice of painting; 9. Of the universal colour bill; 10. Of the suppression of the chromatic sedition; 11. Concerning our priests; 12. Of the doctrine of our priests; Part II. Other Worlds: 13. How I had a vision of Lineland; 14. How in my vision I endeavoured to explain the nature of Flatland, but could not; 15. Concerning a stranger from Spaceland; 16. How the stranger vainly endeavoured to reveal to me in words the mysteries of Spaceland; 17. How the sphere, having in vain tried words, resorted to deeds; 18. How I came to Spaceland and what I saw there; 19. How, though the sphere showed me other mysteries of Spaceland, I still desired more, and what came of it; 20. How the sphere encouraged me in a vision; 21. How I tried to teach the theory of three dimensions to my grandson, and with what success; 22. How I then tried to diffuse the theory of three dimensions by other means, and of the result; Appendix A. Critical reaction to Flatland; Appendix B. Biography and chronology of Edwin A. Abbott; References and recommended reading.

"It is all good fun, and the authors point out much that we readers would probably otherwise miss... This annotated version of Flatland is clearly designed to be enjoyed by a very wide audience. ... Readers of this edition will become more familiar with Edwin A. Abbott the person. The multitude of notes explaining, among other things, Abbott's wordplay, his grasp of classical Greek culture, and his critical views of Victorian society makes us almost feel like we are having a conversation with him... I highly recommend this edition. Abbott's story can be enjoyed by those with a taste for any combination of mathematics, linguistics, social commentary, history, philosophy, religion, and faith. Lindgren and Banchoff's notes and commentary deepen the enjoyment of these many dimensions of Abbott's creation." David A. Huckaby, MAA Reviews "There (have been) lots of new editions (of Flatland) and further interpretations of the original. But the book presented here is something totally new. ... The book can be highly recommended, it is a must for all admirers of Flatland." Karin Reich, Zentralblatt MATH "Flatland should be in every mathematics collection, and this is the definitive edition. Outstanding Academic Title." C. A. Gorini, Maharishi University of Management, Choice Magazine "With their informative notes, Banchoff and Lindgren add immeasurably to the text. In addition to explanations of arcane terminology and of the mathematics involved, they provide the background necessary to understand the book in the context of Victorian England. It is a period during which entrenched ideas, both social and scientific, were undergoing dramatic metamorphosis. Banchoff and Lindgren's comments on Abbott and his milieu allow the reader to comprehend this fascinating turning point in history. ... The plethora of fascinating background information and detail will make you appreciate the book at a much deeper level." American Scientist

Buch (gebunden)
Euler at 300: An Appreciation