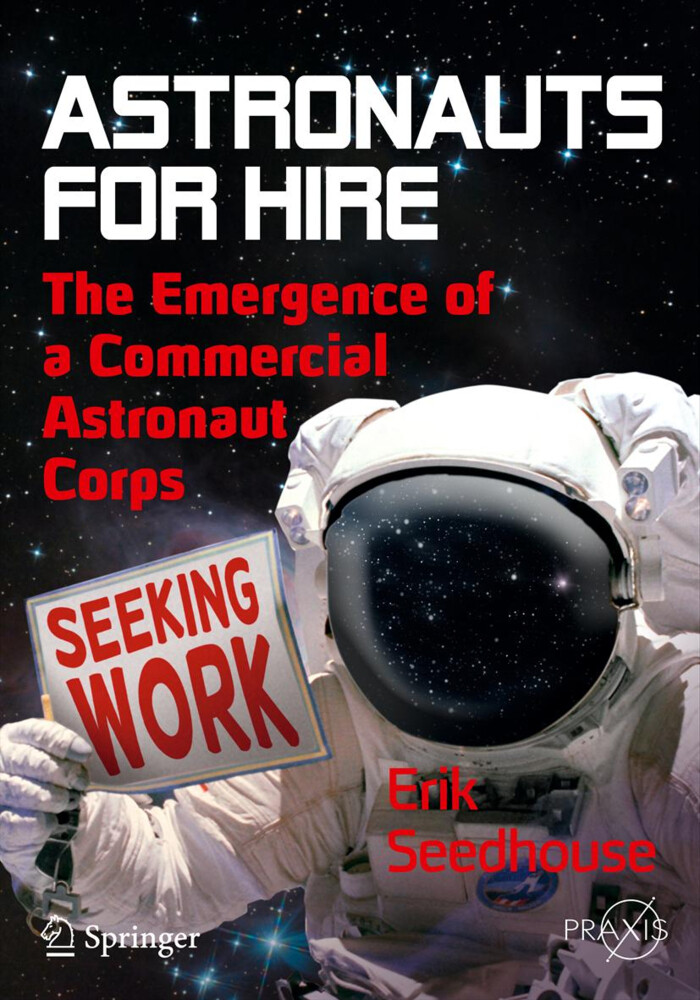 'Astronauts For Hire' is a comprehensive and authoritative study of the increasing need for commercial astronauts. Erik Seedhouse provides unique insights into the burgeoning new field of commercial space operation and the individuals who will run these missions. Section I begins by describing how Astronauts for Hire (A4H) was created in 2010 by Brian Shiro, a highly qualified NASA astronaut candidate, and a group of other astronaut candidates. Erik introduces A4H's vision for opening the space frontier to commercial astronauts and describes the tantalizing science opportunities offered when suborbital and orbital trips become routine. Section II describes the vehicles astronauts will use. Anticipation is on the rise for the new crop of commercial suborbital and orbital spaceships that will serve the scientific and educational market. These reusable rocket-propelled vehicles are expected to offer quick, routine, and affordable access to the edge of space, along with the capability to carry research and educational crew members. The quick turnaround of these vehicles is central to realizing the profit-making potential of repeated sojourns by astronauts to suborbital and orbital heights. Section III describes the various types of missions this new corps of astronauts will fly and who will hire them. For example, suborbital flights may be used to do high altitude astronomy, life science experiments, and microgravity physics. This section continues with an examination of the types of missions that will accelerate human expansion outward, to Exploration Class missions through lunar bases, the establishment of interplanetary spaceports, and outposts on the surface of Mars. Along the way it describes the tasks commercial astronauts will perform, ranging from mining asteroids to harvesting helium.

Erik Seedhouse is a Norwegian-Canadian suborbital astronaut whose life-long ambition to work in space is one step closer to being realized thanks to the organization that provided the inspiration for this book. After completing his first degree in Sports Science at Northumbria University, the author joined the legendary 2nd Battalion the Parachute Regiment, the world's most elite airborne regiment. During his time in the "Para's," Erik spent six months in Belize, where he was trained in the art of jungle warfare and conducted several border patrols along the Belize-Guatemala border. Later, he spent several months learning the intricacies of desert warfare on the Akamas Range in Cyprus. He made more than 30 jumps from a Hercules C130 aircraft, performed more than 200 helicopter abseils, and fired more light anti-tank weapons than he cares to remember!
Upon returning to the comparatively mundane world of academia, the author embarked upon a Master's degree in Medical Science at Sheffield University. He supported his studies by winning prize money in 100 km ultradistance running races. Shortly after placing third in the World 100 km Championships in 1992 and setting the North American 100 km record, the author turned to ultradistance triathlon, winning the World Endurance Triathlon Championships in 1995 and 1996. For good measure, he also won the inaugural World Double Ironman Championships in 1995 and the infamous Decatriathlon, the world's longest triathlon - an event requiring competitors to swim 38 km, cycle 1,800 km, and run 422 km. Non-stop!
Returning the academia once again in 1996, Erik pursued his Ph.D. at the German Space Agency's Institute for Space Medicine. While conducting his Ph.D. studies, he still found time to win Ultraman Hawai'i and the European Ultraman Championships as well as completing the Race Across America (RAAM) bike race. Due to his success as the world's leading ultradistance triathlete, Erik was featured in dozens of magazines and television interviews. In 1997, GQ magazine nominated him as the "Fitted Man in the World."
In 1999, Erik decided it was time to get a real job. He retired from being a professional triathlete and started his post-doctorial studies at Vancouver's Simon Fraser University's School of Kinesiology. In 2005, the author worked as an astronaut training consultant for Bigelow Aerospace in Las Vegas and wrote Tourists in Space, a training manual for spaceflight participants. He is a Fellow of the British Interplanetary Society and a member of the Space Medical Association. Recently, he was one of the final 30 candidates of the Canadian Space Agency's Astronaut Recruitment Campaign. Erik works as a manned spaceflight consultant, professional speaker, triathlon coach, and author. He is the Training Director for Astronauts for Hire (www.astronauts4hire.org) and completed his suborbital astronaut training in May 2011. He is eligible for spaceflight assignments and plans to travel into space as an A4H astronaut on board one ore more (hopefully several!) of the commercial spacecraft written about in this book.
In addition to being a suborbital astronaut, triathlete, skydiver, pilot, and author, Erik is an avid mountaineer and is currently pursuing his goal of climbing the Seven Summits. Astronauts for Hire is his ninth book. When not writing, he spend as much time as possible in Kona on the Big Island of Hawai'i and at his real home in Sandefjord, Norway. Erik is owned by three rambunctious cats - Jasper, Mini-Mach, and Lava - none of whom has expressed any desire to travel into space but who nevertheless provided invaluable assistance in writing this book (!).