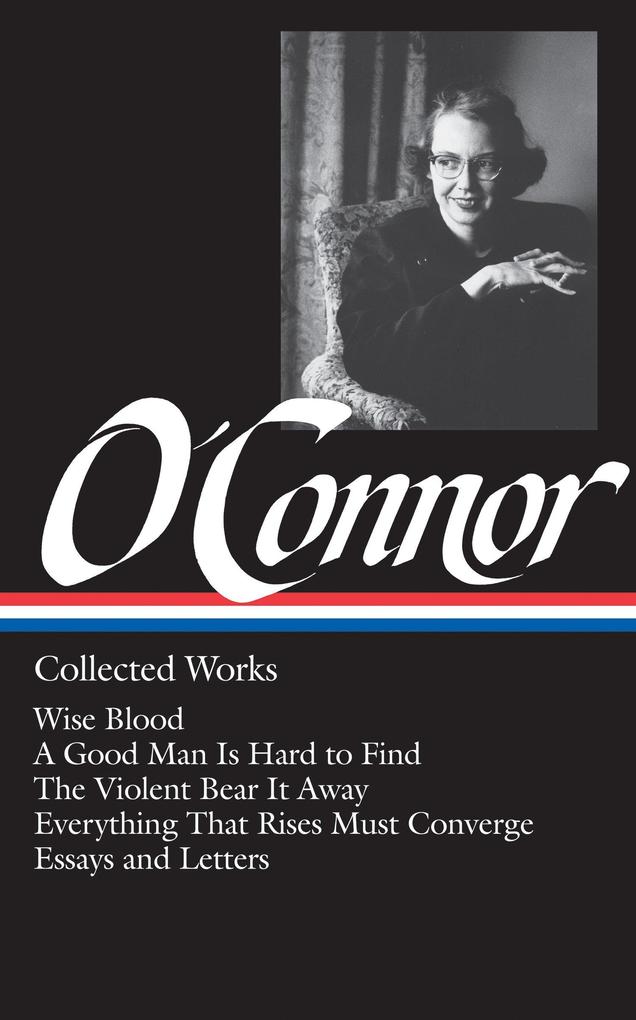 von Flannery O'Connor
Sprache: Englisch.
Buch (gebunden)
In her short lifetime, Flannery O'Connor became one of the most distinctive American writers of the twentieth century. By birth a native of Georgia and a Roman Catholic, O'Connor depicts, in all its comic and horrendous incongruity, the limits of wor … weiterlesen
Geschenk per Mail versenden
Buch (gebunden)

The Library of America

In her short lifetime, Flannery O'Connor became one of the most distinctive American writers of the twentieth century. By birth a native of Georgia and a Roman Catholic, O'Connor depicts, in all its comic and horrendous incongruity, the limits of worldly wisdom and the mysteries of divine grace in the "Christ-haunted" Protestant South. This Library of America collection, the most comprehensive ever published, contains all of her novels and short-story collections, as well as nine other stories, eight of her most important essays, and a selection of 259 witty, spirited, and revealing letters, twenty-one published here for the first time.

Her fiction brilliantly explores the human obsession with seemingly banal things. It might be a new hat or clean hogs or, for Hazel Motes, hero of Wise Blood (1952), an automobile. "Nobody with a good car needs to be justified," Hazel assures himself while using its hood for a pulpit to preach his "Church Without Christ." As in O'Connor's subsequent work, the characters in this novel are driven to violence, even murder, and their strong vernacular endows them with the discomforting reality of next-door neighbors. "In order to recognize a freak," she remarks in one of her essays, "you have to have a conception of the whole man."

In the title story of her first, dazzling collection of stories, A Good Man Is Hard to Find (1955), the old grandmother discovers the comic irrelevance of good manners when she and her family meet up with the sinister Misfit, who claims there is "no pleasure but meanness." The terror of urban dislocation in "The Artificial Nigger," the bizarre baptism in "The River," or one-legged Hulga Hopewell's encounter with a Bible salesman in "Good Country People"-these startling events give readers the uneasy sense of mysteries about to be revealed.

Her second novel, The Violent Bear It Away (1960), casts the shadow of the Old Testament across a landscape of backwoods shacks, modern towns, and empty highways. Caught between the prophetic fury of his great-uncle and the unrelenting rationalism of his uncle, fourteen-year-old Francis Tarwater undergoes a terrifying trial of faith when he is commanded to baptize his idiot cousin.

The nine stories in Everything That Rises Must Converge (1965) show O'Connor's powers at their height. The title story is a terrifying, heart-rending drama of familial and racial misunderstanding. "Revelation" and "The Enduring Chill" probe further into conflicts between parental figures and recalcitrant offspring, where as much tension is generated from quiet conversation as from the physical violence of gangsters and fanatics.

Flannery O'Connor was born in Savannah, Georgia, on March 25, 1925, and was raised as a devout Roman Catholic in Milledgeville, Georgia. Upon graduation from the Graduate Program of the Women's College of Georgia, O'Connor attended the writing program at the State University of Iowa, receiving her MFA in 1947. Among the strongest influences on O'Connor's work were the writings of William Faulkner and Nathanael West, from whom she derived her conception of the grotesque in literature. Following the publication of numerous short stories in literary journals, O'Connor's first novel, Wise Blood, was published in 1952. Suffering from a hereditary rheumatic ailment, she spent the next twelve years writing at the family farm in Milledgeville under the care of her mother, Regina, and the strictest medical super vision. A Good Man is Hard to Find, a collection of short stories, was published in 1955, and another novel, The Violent Bear It Away, appeared in 1960. Though seriously ill, O'Connor made an extensive series of lecture tours, received an honorary degree from Smith College in 1963, and that same year, won first prize in the annual O'Henry short story awards (as she had previously done in 1956). After her death on August 3, 1964, another collection of short stories, Everything That Rises Must Converge, was published (1965), as well as a volume of unpublished lectures and essays and various critical articles, Mystery and Manners (1969).