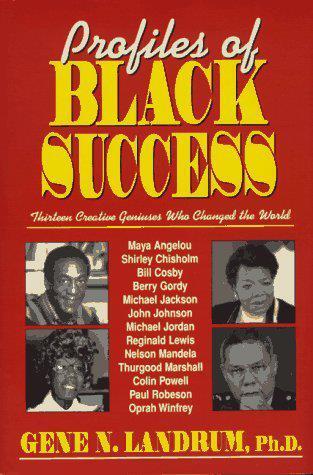 Gene Landrum has expandied his popular "profiles" series to feature 13 special individuals whose extraordinary achievements result from an insatiable internal drive and a demand for excellence despite few inherited advantages. What are the characteristics which brought them creative and entrepreneurial success? Are these characteristics of genius inherited or acquired? Profiles of Black Success focuses on five important factors historical mentors, (e.g., Frederick Douglass or Martin Luther King, Jr.), nature vs. nurture, crisis and creativity, success imprints, and personality making his work contrary to the Bell Curve Theory.

Gene N. Landrum, PhD, is a high-tech start-up executive turned educator and writer. As a businessman he originated the Chuck E. Cheese concept of family entertainment among other entrepreneurial ventures. After years of interacting with creative and overachieving personalities, he decided to document the inner workings of what made them tick and did his doctoral dissertation on the Jungian Psychology of Success. Dr. Gene lectures extensively on the vagaries of eminence and teaches MBAs at the Hodges University graduate school in southwest Florida. He is the author of many books, including Eight Keys to Greatness, Profiles of Genius, Profiles of Female Genius, Profiles of Black Success, and Profiles of Success. Visit him online at www.genelandrum.net.