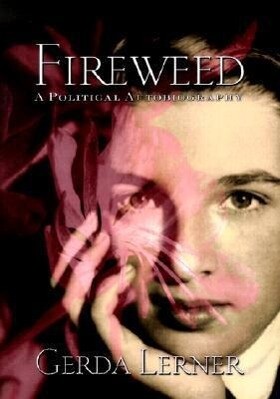 von Gerda Lerner
A Political Autobiography. Sprache: Englisch.
Buch (gebunden)
In "Fireweed, Gerda Lerner, a pioneer and leading scholar in women's history, tells her story of moral courage and commitment to social change. Focusing on the formative experiences that made her an activist for social justice before her academic car … weiterlesen
Geschenk per Mail versenden
Buch (gebunden)

In "Fireweed, Gerda Lerner, a pioneer and leading scholar in women's history, tells her story of moral courage and commitment to social change. Focusing on the formative experiences that made her an activist for social justice before her academic career began, Lerner presents her life in the context of the major historical events of the twentieth century. Hers is a gripping story about surviving hardship and living according to one's convictions.

"It is an extraordinary work, the deeply personal account revealing and unfolding both women's history and the political history of Europe and the United States in critical times...Please read this exquisite book and pass it along to others as widely as you can." Science and Society "In this rich autobiography, Gerda Lerner, the esteemed historian and pioneer of women's studies known for her path-breaking work on women who fought against patriarchy, racism, and bigotry, explores her own personal struggle against oppression - through recounting her life, she shows us that even in the face of destruction, the human spirit, like the fireweed, can rise up in all its glory." History of Education Quarterly "Gerda Lerner's absorbing memoir bears witness to the major events of the twentieth century...[She] is a gifted storyteller who writes with passion and clarity. This political autobiography is a must read!" --Joyce Antler, Samuel Lane Professor of American Jewish History and Culture, Brandeis University "A spirited, eminently readable and unapologetic memoir of leftist life in a rightist era...[L]eaving readers hungry for more[,] Lerner's autobiography also makes a fine contribution to social history." --Kirkus Reviews "Fireweed is made out of courage and wisdom. One of the finest historians of our time has written an eloquent memoir that makes clear how Women's History has grown out of lived experience. Read it as a story of a girl coming of age in dark times; read it as a story of a brave young woman who lives her progressive ideals in cold war America. I simply could not put down this loving, chilling and heartbreaking book." --Linda K. Kerber, May Brodbeck Professor of History, University of Iowa and author of No Constitutional Right to Be Ladies: Women and the Obligations of Citizenship "Gerda Lerner, a leading pioneer in Women's History...presents an especially vivid account of the connections between her ambivalent but loving relations with her parents...and her own escape from fascism and quest for both autonomy and a professional career." --Professor David Brion Davis, Director, Yale's Gilder Lehrman Center for the Study of Slavery, Resistance, and Abolition, and author of In the Image of God: Religion, Moral Values, and Our Heritage of Slavery "[A] superb memoir... Lerner's power and precision as a writer makes this story read like a fast-paced novel." --Linda Gordon, Professor of History, NYU "Most people become historians by going to school day and night for years. Gerda Lerner became a historian by working in her youth in social justice and women's rights movements that became history. Then, in middle age, she went to school day and night--finally becoming one of our preeminent writers and teachers of Women's History. Fireweed is a wonderful and inspiring story for young women." --Grace Paley "[Fireweed] reads like a novel..." --The New York Times Book Review "As a work of prose, this autobiography has a peculiar beauty. Some of the lines are magical... Perhaps the most striking aspect of Gerda Lerner's memoir, as of her many other publications, is the lucidity of her vision... But, like the eloquent Simone de Beauvoir, who also told her own life, she has made it difficult for any would-be biographer to do better." --The Women's Review of Books "Now in her 80s, Lerner looks back not on the years of prominence but on those early decades that shaped her thought and made her life's work possible... [C]ertain to find a deserved place in every collection of indispensable works of women's history." --Publishers Weekly (starred review) "Lerner has produced a grand and beautiful work, well organized in clean, lovely prose...With scrupulous scholarship and deep humanity, Lerner details her life as a helpless outsider--as well as her family relations and intellectual development... In a world where accuracy and emotional honesty are often deplorably absent, Fireweed is a rare and valuable contribution." --Library Journal (starred review) "Lerner, a leading scholar in women's history, dissects her personal history in this absorbing autobiography...A fascinating memoir." --Booklist "The wellsprings of Lerner's pioneering scholarship in women's studies are illuminated by her life experiences as related in often astonishingly candid passages. ...This distinctive volume is valuable not only for readers interested in how experience shapes a leading historian, but for its reminder that individuals who want to believe in a certain social or political system often ignore or brush aside inconvenient facts that do not fit their ideal." --Choice "[a] stunning political autobiography...it should appeal to a wide readership...Gerda Lerner's life story is astonishing in its forthrightness, breathtaking in its narrative and, like the fireweed itself, simply dazzling." --NWSA Journal