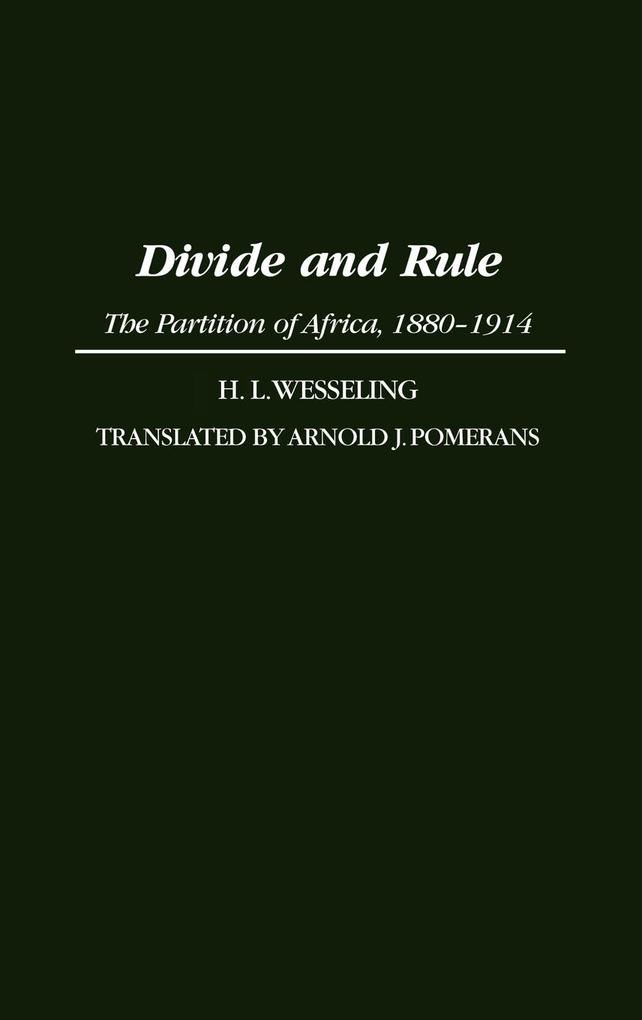 von H. L. Wesseling
The Partition of Africa, 1880-1914. HC gerader Rücken kaschiert. Sprache: Englisch.
Buch (gebunden)
This work offers a general historiographical overview of the dramatic events that marked the colonial period in which Africa was partitioned. Such major historical questions as the causes of European imperialism are also examined.

This work offers a general historiographical overview of the dramatic events that marked the colonial period in which Africa was partitioned. Such major historical questions as the causes of European imperialism are also examined.

Part 1 "The Eastern Question" - the Occupation of Tunisia and Egypt, 1881-1882: France and Imperialism; Tunisia; Great Britain and Imperialism; Egypt; The Sudan and the Nile; Conclusion. Part 2 The Congo and the Creation of the Free State, 1882-1885: Belgium and Leopold II; The Brussels Conference and its Consequences; Europeans in the Congo; The Congo Question, 1882-1884; Germany and Imperialism, The Berlin Conference; The Birth of the Free State; Conclusion. Part 3 "Cool and Courageous" - Germany and Great Britain in East Africa, 1885-1890: The Rise of Zanzibar and British Influence; Germany and East Africa; Great Britain and Germany in East Africa, 1886-1890; The Cape-to-Cairo Dream and the Zanzibar-Heligoland Treaty; Uganda; Epilogue - the French Occupation of Madagascar; Conclusion. Part 4 Soldiers and Traders - France and Great Britain in West Africa, 1890-1989: France in the Sudan; Britain and the Niger; The Partition - Phase I, 1890-1895; The Partition - Phase II, 1895-1898; Conclusion. Part 5 The Long March to Fashoda, 1893-1898: The British Nile Strategy; The French Nile Strategy; Italy and Imperialism; The Mission that Failed - the Marchand Mission; Fashoda; Conclusion. Part 6 Boers and Britons in South Africa, 1890-1902: The Historical Background; Foreigners and Gold Strikes, 1884-1886; Rhodes and Rhodesia, 1890-1893; Rhodes vs. Kruger; Toward the Second Boer War; The Second Boer War, 1899-1902; Conclusion. Part 7 Epilogue - The Partition of Morocco, 1905-1912: Morocco and Europe; France and Morocco; From Tangier to Agadir; Conclusion; Notes; Bibliography; Appendix 1 - Important Treaties and Agreements; Appendix 2 - Synchronic Survey.

"This book is the most judicious and most evenhanded synthesis of the rich historiography concerning the partition of Africa from the perspective of European imperial historians. Its special merits are its overall clarity and its guidance to the relevant more specialized works so that it becomes an ideal textbook on the subject. Its brilliance lies in its weaving in of the diplomatic records about all the European players involved, rather than relying on an account derived from one or two major powers....It is this ability to refuse to simplify, to present complexity, to underline the interplay between the unexpected and the expected, which constitutes the main achievement of this remarkable work, and sets it off from others."-Jan Vansina, John D. Mac Arthur and Vilas professor emeritus University of Wisconsin-Madison