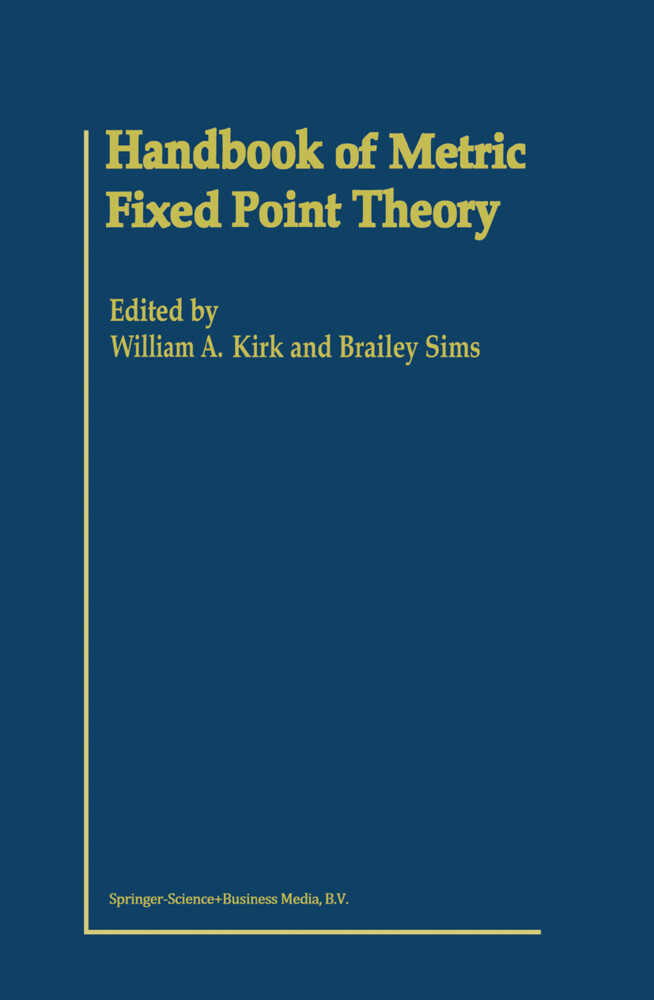 Metric fixed point theory encompasses the branch of fixed point theory which metric conditions on the underlying space and/or on the mappings play a fundamental role. In some sense the theory is a far-reaching outgrowth of Banach's contraction mapping principle. A natural extension of the study of contractions is the limiting case when the Lipschitz constant is allowed to equal one. Such mappings are called nonexpansive. Nonexpansive mappings arise in a variety of natural ways, for example in the study of holomorphic mappings and hyperconvex metric spaces. Because most of the spaces studied in analysis share many algebraic and topological properties as well as metric properties, there is no clear line separating metric fixed point theory from the topological or set-theoretic branch of the theory. Also, because of its metric underpinnings, metric fixed point theory has provided the motivation for the study of many geometric properties of Banach spaces. The contents of this Handbook reflect all of these facts. The purpose of the Handbook is to provide a primary resource for anyone interested in fixed point theory with a metric flavor. The goal is to provide information for those wishing to find results that might apply to their own work and for those wishing to obtain a deeper understanding of the theory. The book should be of interest to a wide range of researchers in mathematical analysis as well as to those whose primary interest is the study of fixed point theory and the underlying spaces. The level of exposition is directed to a wide audience, including students and established researchers.

`...a wide, up to date and complete presentation of the subject. ...the book appears uniform in style and in the organization of the chapters unncecessary repetitions are practically absent. The large number of authors certainly helped make it possible to treat all the topics presented with the scope and detail that only specialists in the specific subfields can guarantee. Each chapter begins with either a clear and complete exposition of the basic results in its subject area or with the necessary background to get to basic results, then it enters into more specialized results and ends with an exhaustive list of references. ...valuable and agreeable to a large group of mathematicians. For researchers ... a comprehensive reference ... useful for a broad knowledge and understanding of metric fixed point theory. ...editors have succeeded admirably in producing a handbook, not just a collection of papers...'
Australian Mathematical Society GAZETTE, 29:2 (2002)