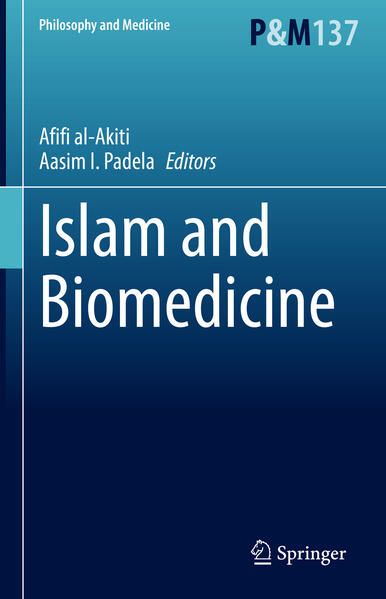 1st ed. 2020. Sprache: Englisch.
Buch (gebunden)
This book showcases multidisciplinary research at the intersection of the Islamic tradition and biomedicine. Within this broad area of scholarship, this book considers how Islamic theological constructs align with the science and practice of medicine … weiterlesen
Geschenk per Mail versenden
Buch (gebunden)

This book showcases multidisciplinary research at the intersection of the Islamic tradition and biomedicine. Within this broad area of scholarship, this book considers how Islamic theological constructs align with the science and practice of medicine, and in so doing offer resources for bridging the challenges of competing ontological visions, varied epistemic frameworks, and different theologies of life and living among the bodies of knowledge. By bringing together theologians, medical practitioners and intellectual historians, the book spurs deeper conversations at the intersection of these fields and provides fundamental resources for further dedicated research.

Taking On the Ghaz lian Challenge of Integrating Science and Theology with Islam and Biomedicine.- Medical Epistemology in Arabic Discourse from Greek Sources to the Arabic Commentary Tradition.- The Piety of Health: The Making of Health in Islamic Religious Narratives.- The Concept of a Human Microcosm: Exploring Possibilities for a Synthesis between Traditional and Modern Biomedicine.- Islam in Engagement with Life, Health and Medicine.- When Does a Human Fetus Become Human?.- At the Meeting of the Two Seas: The Value of Integrating Philosophy of Science and Religion in Determining the Nature and Purpose of the Human Self.- Muslim Values and End-of-Life Healthcare Decision-making: Values, Norms and Ontologies in Conflict?.- Intersection between Science, Philosophy and the Sunn Theological and Legal discourse in Defining Medical Death.- Islam and Science: Deepening the Discourse.- Science through an Islamic Epistemological Framework.- Interface between Islamic Law and Science: Legal Construction of Science in Light of Islamic Bioethical Discourses on Genetic and Reproductive Technologies.- Integrating Science and Scripture to Produce Moral Knowledge: Assessing Human Interests and Necessities in Islamic Bioethics.

Dato Prof. Afifi al-Akiti is the Kuwait Fellow in Islamic Studies at the Oxford Centre for Islamic Studies and Lecturer in Islamic Studies in the Faculty of Theology.  He is also a Fellow of Worcester College, Oxford.  Dato Afifi is trained as a theologian and philologist in both the Islamic and Western traditions: educated initially at the feet of the ulema of the Muslim world.  His areas of expertise are Islamic theology, philosophy and science.  He has worked on several BBC documentaries, including the award-winning Science and Islam(2009).  In 2010 he was made a Member of the Ulama Council of Malaysia and elected into the Privy Council of the state, the Dewan Negara, constitutionally as a Life Peer.  Since 2010, Dato Dr Afifi has been listed in The Muslim 500: The World s 500 Most Influential Muslims.Dr. Aasim I. Padela is the Professor of Emergency Medicine, Bioethics, and Humanities at the Medical College of Wisconsin. He also directs the Initiative on Islam and Medicine, an independent non-profit educational and research center. Dr. Padela is a clinician-researcher with scholarly foci at the intersections of healthcare, bioethics, and religion. Using Muslim Americans and Islam as a model, he studies how (i) religion impacts patient health behaviors and healthcare experiences, (ii) informs the professional identities and workplace experiences of clinicians, and (iii) furnishes bioethical guidance to patients, providers, policy-makers, and religious leaders. Dr. Padela holds an MD from Weill Cornell Medical College, completed residency in emergency medicine at the University of Rochester, and received an MSc in Healthcare Research from the University of Michigan. Prior to that, he received Bachelor s degrees in Biomedical Engineering and Classical Arabic and Literature from the University of Rochester. His Islamic studies expertise comes from part-time seminary studies during secondary school, and tutorials with traditionally-trained Islamic authorities. He has authored over 100 peer-reviewed journal articles and book chapters, serves in an editorial capacity for the Encyclopedia of Islamic Bioethics, American Journal of Bioethics, BMC Medical Ethics, Global Bioethics, the International Journal of Islam, BETIM Journal of Medical Humanities, and TAHFIM Journal of Islam and the Contemporary World. His work and expert commentary has been featured in the New York Times, USA Today, the Chicago Tribune, Washington Post, National Public Radio, BBC, and CNN. His next book, Medicine and Shariah: A Dialogue in Islamic Bioethics, is forthcoming from the University of Notre Dame Press in early 2021.
Kunden, die diesen Artikel gekauft haben, kauften auch