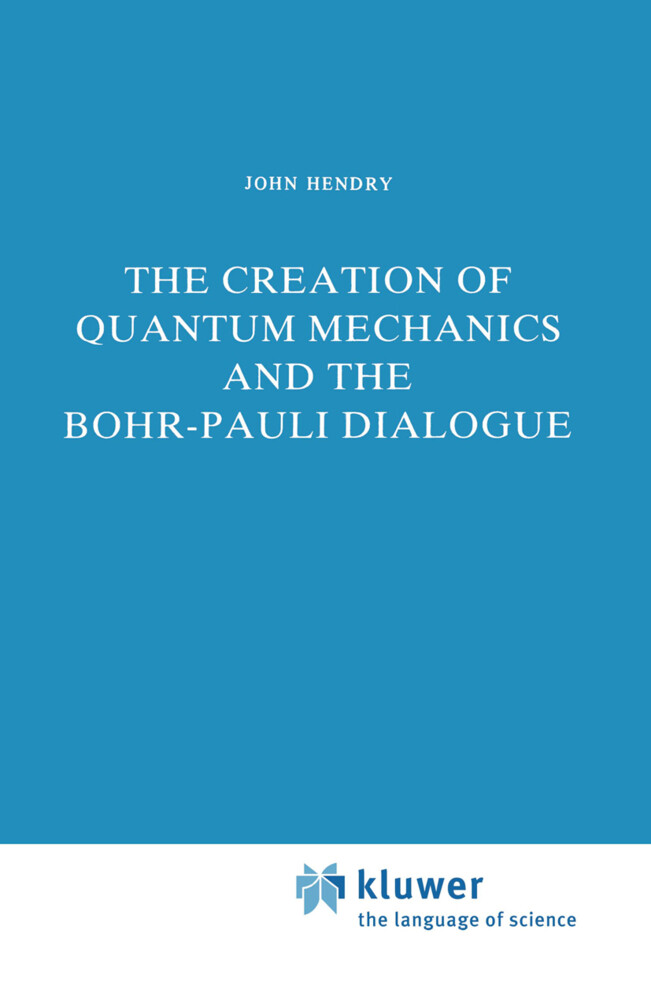 The Creation of Quantum Mechanics and the Bohr-Pauli Dialogue

von J. Hendry
Auflage 1984. HC runder Rücken kaschiert. Sprache: Englisch.
Buch (gebunden)
Many books have been written on the history of quantum mechanics. So far as I am aware, however, this is the first to incorporate the results of the large amount of detailed scholarly research completed by professional historians of physics over the … weiterlesen
Dieser Artikel ist auch verfügbar als:
Geschenk per Mail versenden
Buch (gebunden)

Titel: The Creation of Quantum Mechanics and the Bohr-Pauli Dialogue
Autor/en: J. Hendry

Many books have been written on the history of quantum mechanics. So far as I am aware, however, this is the first to incorporate the results of the large amount of detailed scholarly research completed by professional historians of physics over the past fifteen years. It is also, I believe, the first since Max Jammer's pioneering study of fifteen years ago to attempt a genuine 'history' as opposed to a mere technical report or popular or semi-popular account. My aims in making this attempt have been to satisfy the needs of historians of science and, more especially, to promote a serious interest in the history of science among phYSicists and physics students. Since the creation of quantum mechanics was inevitably a technical process conducted through the medium of technical language it has been impossible to avoid the introduction of a large amount of such language. Some acquaintance with quantum mechanics, corresponding to that obtained through an undergraduate physics course, has accordingly been assumed. I have tried to ensure, however, that such an acquaintance should be sufficient as well as necessary, and even someone with only the most basic grounding in physics should be able with judicious skip ping, to get through the book. The technical details are essential to the dialogue, but the plot proceeds and can, I hope, be understood on a non technical level.

1. Introduction.- 2. Wolfgang Pauli and the Search for a Unified Theory.- 3. Niels Bohr and the Problems of Atomic Theory.- 4. The Technical Problem Complex.- 5. From Bohr's Virtual Oscillators to the New Kinematics of Heisenberg and Pauli.- 6. The New Kinematics and Its Exploration.- 7. Wave Mechanics and the Problem of Interpretation.- 8. Transformation Theory and the Development of the Probabilistic Interpretation.- 9. The Uncertainty Principle and the Copenhagen Interpretation.- 10. Concluding Remarks.- Notes.- Select Bibliography.

`Hendry has written a good book, an important one that we can add to the list of recent publications on the history of quantum mechanics. ... Nevertheless, The Creation of Quantum Mechanics is a worthy contribution to the historical literature on twentieth-century physics.'
Annals of Science, 43 (1986)
`...Hendry's book is an important contribution to the literature on the history of twentieth-century physics. Not only is his account highly competent and well written, but it also incorporates most of the important scholarly research in this field of the past two decades. Hendry's attempt to obtain a greater insight into the philosophy of quantum theory of exploring its history will stimulate both historians and philosophers of science.'
ISI (1986)
`...recommend Hendry's thoughtful and carefully documented book. It is an ambitious and stimulating work which should interest any historian of modern physics. ... students specializing in the history of modern physics are well advised to study it carefully.'
The Modern Schoolman (November 1983)

Buch (gebunden)
Psychiatry in an Anthropological and…
von G. Verwey

Buch (gebunden)
The Emergence of Ornithology as a…