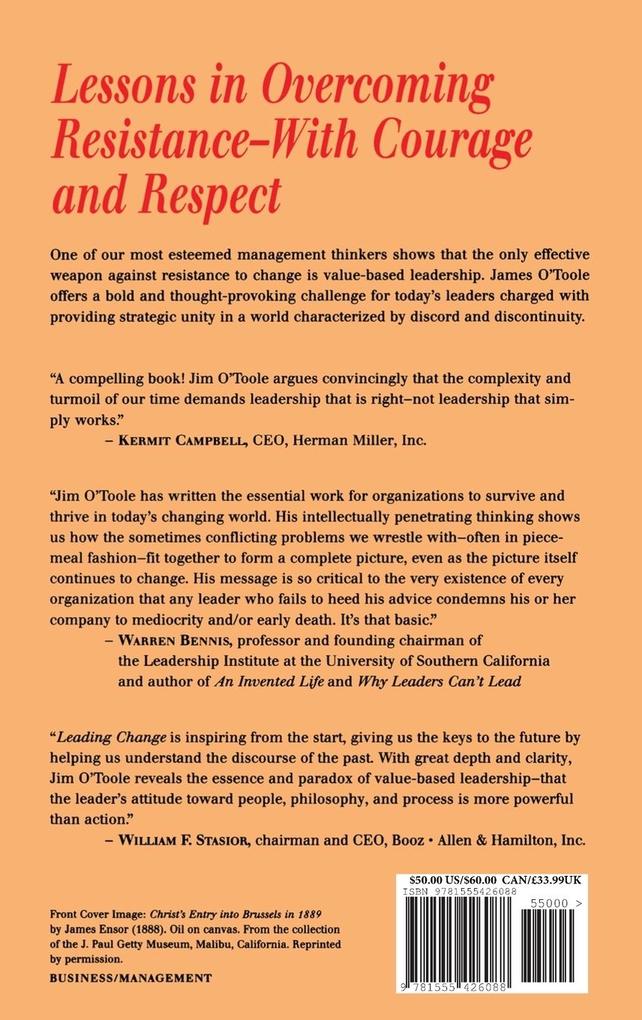 In his sixteenth century masterpiece, The Prince, Niccolo Machiavelli advised leaders to "learn how not to be good," and moreover, to use this knowledge regardless of individual case. Under the guise of modern day "situational leadership," organizations still take refuge in this outdated theory. In Leading Change, James O'Toole argues that such amoral practices are ultimately ineffective— and demonstrates instead that successful leadership is rooted in high moral purpose and consistent respect for followers.

Christ Comes to Brussels: An Introduction to Values-Based Leadership. LEADERS LEADING CHANGE. The Rushmoreans: An Indelible Lesson in Values-Based Leadership. The Corporate Rushmoreans: How to Lead Change Effectively and Morally. The Realists and the Fallacy of Tough Leadership. Why Amoral Leadership Doesn't Work. Leaders of Leaders: Why Values-Based Leadership Is an Unnatural Act. Why Democratic Leadership Is Not an Oxymoron. FOLLOWERS RESISTING CHANGE. Change Resisted: Thirty-Two Hypotheses Why. Drucker Unheeded: Two Potent Sources of Resistance to Change. Deming Ignored: Premature Articulation or Flawed Leadership? Owen Unrecognized: The Early Promise of the New Management. Owen Rejected: Valid Reasons or Rationalization? Mill Interpreted: The Despotism of Custom. The Ideology of Comfort: A "Good Enough" Explanation of Resistance to Change.

JAMES O'TOOLE is a noted authority on leadership and vice president of The Aspen Institute, where he directs the renowned program as Executive Seminar and the Corporate Leaders Forum. He is co-founder (with Warren Bennis) and most recently served as executive director of the Leadership Institute at the University of Southern California. A Rhodes Scholar, O'Toole has consulted widely to businesses and governments and served as special assistant to Secretary of Health, Education and Welfare Elliot Richardson and as chairman of the Task Force on Work in America. His twelve best-selling books include The Executive's Compass (1993) and Vanguard Management (named one of the best books of 1985 by Business Week), Making America Work (1981), and Work in America (1973). O'Toole's work has been profiled in the Los Angeles Times, Fortune, and The Economist, and he has served on the prestigious Board of Editors of the Encyclopedia Britannica.

"A compelling book! Jim O'Toole argues convincingly that the complexity and turmoil of our time demands leadership that is right--not leadership that simply works." (Kermit Campbell, CEO, Herman Miller, Inc.)