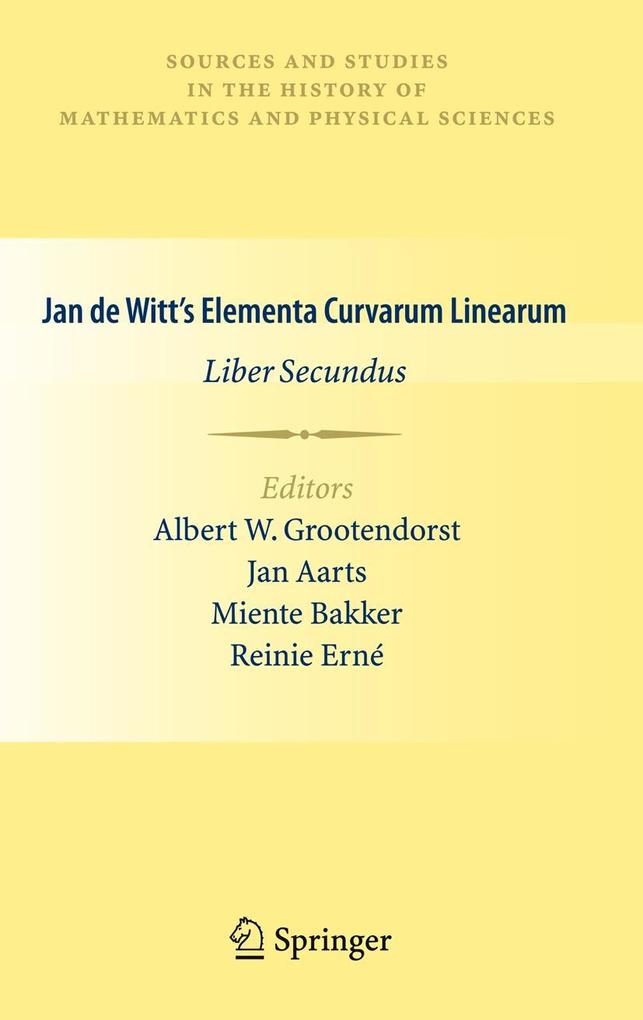 Liber Secundus. Auflage 2010. Sprachen: Englisch Niederländisch.
Buch (gebunden)
This book offers a translation of the second volume of Elementa Curvarum Linearum (Foundations of Curved Lines). One of the first books to be published on Analytic Geometry, it was originally written in Latin, soon after Descartes' invention of the s … weiterlesen
Dieser Artikel ist auch verfügbar als:
Geschenk per Mail versenden
Buch (gebunden)

- Following on from the 2000 edition of Jan De Witt's Elementa Curvarum Linearum, Liber Primus, this book provides the accompanying translation of the second volume of Elementa Curvarum Linearum (Foundations of Curved Lines). One of the first books to be published on Analytic Geometry, it was originally written in Latin by the Dutch statesman and mathematician Jan de Witt, soon after Descartes' invention of the subject.


- Born in 1625, Jan de Witt served with distinction as Grand Pensionary of Holland for much of his adult life. In mathematics, he is best known for his work in actuarial mathematics as well as extensive contributions to analytic geometry.


- Elementa Curvarum Linearum, Liber Secondus moves forward from the construction of the familiar conic sections covered in the Liber Primus, with a discussion of problems connected with their classification; given an equation, it covers how one can recover the standard form, and additionally how one can find the equation's geometric properties.


- This volume, begun by Albert Grootendorst (1924-2004) and completed after his death by Jan Aarts, Reinie Erné and Miente Bakker, is supplemented by:

- extensive commentary on the mathematics

From the reviews:"The book under review is basically a translation of de Witt's second volume, which, in turn, provides additional insights on Descartes' ideas. ... My overall opinion is that this book surpasses D. E. Smith's translation of Descartes' La Géométrie ... . this helps the reader to gain real insight into the mathematics of the 17th century, and the editors must therefore be congratulated on the production of a text that should be included in every university library ... ." (Peter Ruane, The Mathematical Association of America, March, 2011)"Like in the 2000 edition of the first book of Jan de Witt's Elementa curvarum, each page of the original is represented by a facsimile preceded by its English translation. ... A historical introduction provides the context of Elementa curvarum; the appendix starts with the background of Pappus's problem and ends with its solution for five lines by Descartes. The volume offers ... a carefully prepared English edition of a source, which presumably had considerable impact on the subsequent development of the subject." (Ivo Schneider, Mathematical Reviews, Issue 2012 a)