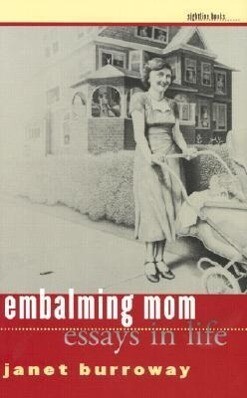 Janet Burroway followed in the footsteps of Sylvia Plath. Like Plath, she was an early Mademoiselle guest editor in New York, an Ivy League and Cambridge student, an aspiring poet-playwright-novelist in the period before feminism existed, a woman who struggled with her generation's conflicting demands of work and love. Unlike Plath, Janet Burroway survived.
In sixteen essays of wit, rage, and reconciliation, Embalming Mom chronicles loss and renaissance in a life that reaches from Florida to Arizona across to England and home again. Burroway brilliantly weaves her way through the dangers of daily life -- divorcing her first husband, raising two boys, establishing a new life, scattering her mother's ashes and sorting the meager possessions of her father. Each new danger and challenge highlight the tenacious will of the body and spirit to heal.
"Ordinary life is more dangerous than war because nobody survives, " Burroway contemplates in the essay "Danger and Domesticity, " yet each of her meditations reminds us that it's our daily rituals and trials that truly keep us alive.

Janet Burroway is the author of plays, poetry, children's books, and seven novels, including The Buzzards, Raw Silk, Opening Nights, and Cutting Stone. Her textbook Writing Fiction, now in its fifth edition, is used in more than three hundred colleges and universities in the United States; a further text, Imaginative Writing, is due out in 2002. She is Robert O. Lawton Distinguished Professor at Florida State University in Tallahassee.