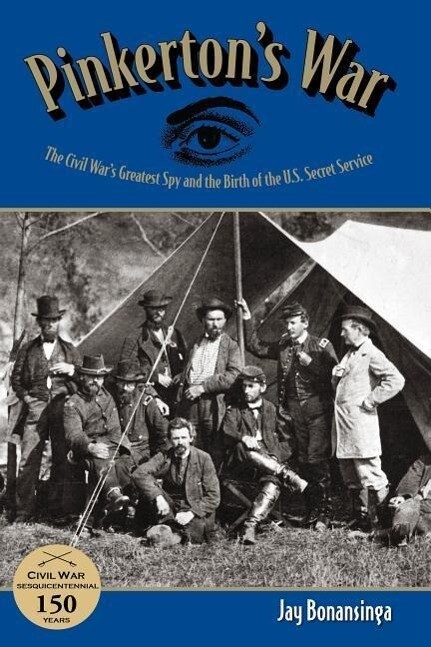 14% Rabatt sichern mit Gutscheincode: LIEBE14
​
A heart-pounding historical account of Allan Pinkerton's role in the Civil War-protector of Abraham Lincoln and mastermind of a controversial network of Union spies.

The Civil War's Greatest Spy And The Birth Of The U. S. Secret Service.
black & white illustrations.
Sprache: Englisch.

A heart-pounding historical account of Allan Pinkerton's role in the Civil War-protector of Abraham Lincoln and mastermind of a controversial network of Union spies.

Jay Bonansinga is the author of the 2004 nonfiction title The Sinking of the Eastland, which was a Chicago Reader "Critics Choice Book" as well as the recipient of a Superior Achievement Award from the Illinois State Historical Society. He is also the author of the novels Perfect Victim (2008), Shattered (2007), Twisted (2006), and Frozen (2005), which have been translated into nine different languages. His debut novel The Black Mariah was a finalist for a Bram Stoker award, and his numerous short tales and articles have been published in such magazines as The Writer, Amazing Stories, Grue, Flesh & Blood, Outre, and Cemetery Dance, as well as a number of anthologies. Jay is also an indie filmmaker whose music videos have been in heavy rotation on The Nashville Network and Public Television. His short film City of Men was awarded the prestigious silver plaque at the Chicago International Film Festival. In 2008, his feature-film debut, Stash (based on his short story of the same title), won the Gold Remi at the Houston International Film Festival and Best Comedy at the Iowa City and Queens International film festivals. Jay has also worked as a screenwriter with horror legend George Romero, Will Smith's production company Overbrook Entertainment, and Dennis Haysbert (The Unit). The holder of a master's degree in film from Columbia College Chicago, Jay currently resides in Evanston, Illinois, with his wife and two sons. He is also a visiting professor at Northwestern University in their Creative Writing for the Media program, as well as the Graduate Writing Program at DePaul University.