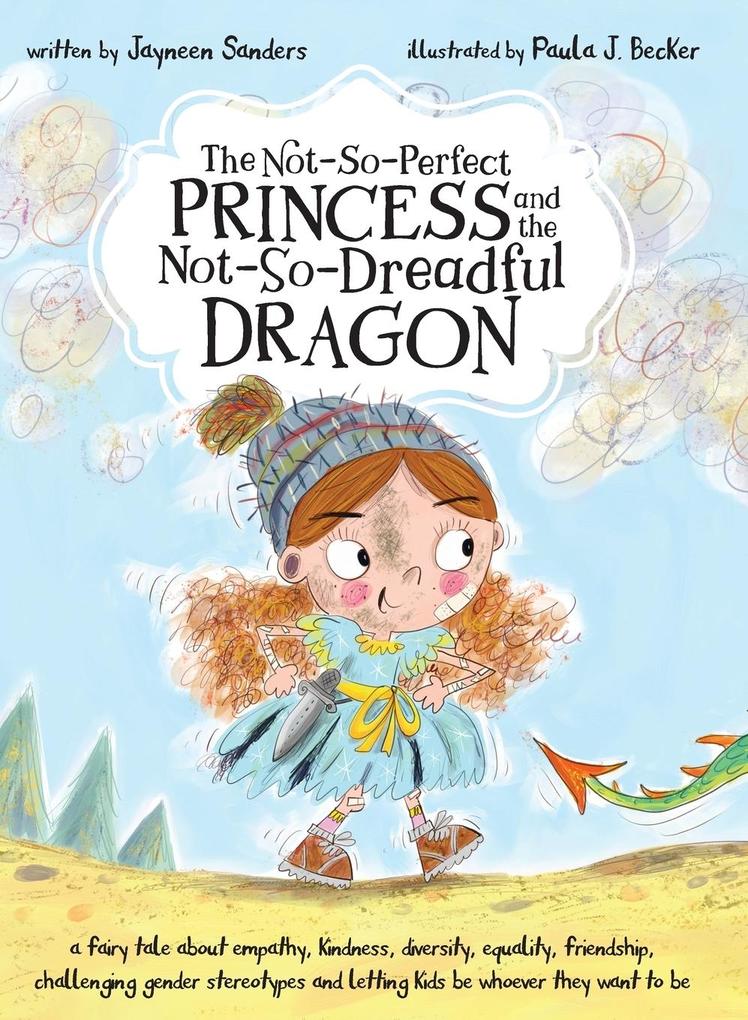 The Not-So-Perfect Princess and the Not-So-Dreadful Dragon

von Jayneen Sanders
a fairy tale about empathy, kindness, diversity, equality, friendship & challenging gender stereotypes. HC…
Buch (gebunden)
Princess Petal is NOT what you would expect the 'perfect' princess to be. In fact, she is quite the opposite. Her princess dresses are torn and scruffy, she wears an old woolly hat instead of a golden crown and she is very (very) loud. So when Prince … weiterlesen
Dieser Artikel ist auch verfügbar als:
Geschenk per Mail versenden
Buch (gebunden)

Princess Petal is NOT what you would expect the 'perfect' princess to be. In fact, she is quite the opposite. Her princess dresses are torn and scruffy, she wears an old woolly hat instead of a golden crown and she is very (very) loud. So when Princess Petal meets a fire-breathing dragon while out hiking in the forest, both are in for a bit of a shock! An enchanting tale about friendship, diversity, acceptance and being exactly who we are meant to be. The moral behind this story is imperative yet simple: we are all different and that's okay, making judgements and assumptions about people is not okay, all genders should be treated equally. Also included are Discussion Questions for parents, caregivers and educators.

Jayneen (aka Jay Dale) is an experienced early years educator, author and publisher.She started her teaching career in the 1980s as a primary school teacher in rural Australia. She then moved to Melbourne and taught at a number of inner-city schools. In 1985, Jay had a change of career and became an educational editor and publisher.In the early 90s, Jay and her partner moved to Japan to work as English teachers. They lived and worked in Japan for over three and a half years. In fact, Jay's first daughter was born there.On returning to Australia, Jay began work as an educational author/packager. Since that time, she has authored and produced numerous award-winning titles for the educational publishing industry. Jay is also an accomplished children's book author, writing a number of titles for such literacy series as ZigZags, Totally Kidz, Deadly and Incredible, and a children's picture book series for Penguin.She is currently working with an educational publisher as lead author of a literacy series. Jay has written over 130 titles in that series.Jay is a mother of three daughters and was a school councillor at her local school for over seven years. This time spent in schools both as a teacher and a parent inspired her to ask the question of her community: 'What are we doing in schools to protect our children from unsafe touch?' When she realised very little was actually being done, she decided to use her authoring and publishing skills to write 'Some Secrets Should Never Be Kept' to help parents, carers and teachers to broach the subject of self-protection and to encourage children to speak up.After the encouraging response to 'Some Secrets Should Never Be Kept', she realised there was a need to further build upon the idea of children not keeping secrets about unsafe touch. Jay participated in Protective Behaviours professional development and attended numerous conferences on the topic to educate herself in how to keep children safe and provide them with prevention education. Jay then went on to develop and publish a comprehensive Body Safety and Respectful Relationship Teacher's Resource Kit as well as writing several more children's books on the topics of Body Safety, consent, respect, body boundaries, gender equality, and social and emotional intelligence. Jay's ongoing passion for the safety and empowerment of children continues today with new manuscripts and free-to-downloadresources always in the wings.