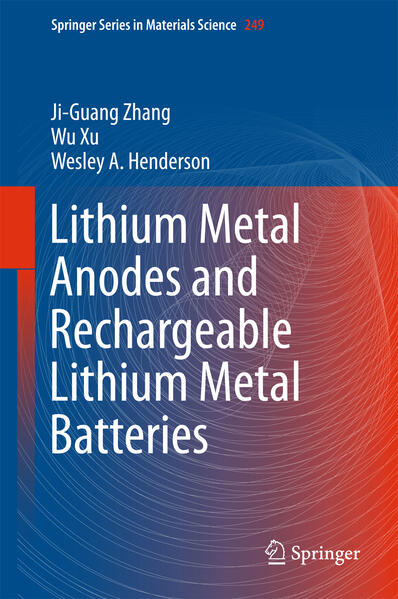 This book provides comprehensive coverage of Lithium (Li) metal anodes for rechargeable batteries. Li is an ideal anode material for rechargeable batteries due to its extremely high theoretical specific capacity (3860 mAh g-1), low density (0.59 g cm-3), and the lowest negative electrochemical potential (-3.040 V vs. standard hydrogenelectrodes). Unfortunately, uncontrollable dendritic Li growth and limited Coulombic efficiency during Li deposition/stripping inherent in these batteries have prevented their practical applications over the past 40 years. With the emergence of post Liion batteries, safe and efficient operation of Li metal anodes has become an enabling technology which may determine the fate of several promising candidates for the next generation energy storage systems, including rechargeable Li-air batteries, Li-S batteries, and Li metal batteries which utilize intercalation compounds as cathodes. In this work, various factors that affect the morphology and Coulombic efficiency of Li anodes are analyzed. The authors also present the technologies utilized to characterize the morphology of Li deposition and the results obtained by modeling of Li dendrite growth. Finally, recent developments, especially the new approaches that enable safe and efficient operation of Li metal anodes at high current densities are reviewed. The urgent need and perspectives in this field are also discussed. The fundamental understanding and approaches presented in this work will be critical for the applicationof Li metal anodes. The general principles and approaches can also be used in other metal electrodes and general electrochemical deposition of metal films.

Dr. Ji-Guang (Jason) Zhang is a Laboratory Fellow of the Pacific Northwest National Laboratory. He is the group leader for PNNL's efforts in energy storage for transportation applications and has 25 years of experience in the development of energy storage devices, including Li-ion batteries, Li-air batteries, Li-metal batteries, Li-S batteries, and thin-film solid-state batteries. He was the co-recipient of two R&D 100 awards, holds 17 patents, and has published more than 200 papers in refereed journals. He was named Thomson Reuters' Highly Cited Researchers-2015 in the Engineering category. Dr. Wu Xu is a Senior Research Scientist in the Energy and Environment Directorate of Pacific Northwest National Laboratory. His main research interests include the development of electrolytes and electrode materials for various energy storage systems (such as lithium batteries, organic redox flow batteries and supercapacitors), the protection of lithium metal anode, and the investigation of electrode/electrolyte interfaces. He obtained his doctoral degree from the National University of Singapore in early 2000. He has had more than 100 papers published in peer-reviewed journals, 6 book chapters, and 24 U.S. patents granted with another 13 patents pending. Dr. Wesley A. Henderson received his Ph.D. in Materials Science & Engineering (University of Minnesota) in 2002. He was a researcher at Lawrence Berkeley National Laboratory (1995) and Los Alamos National Laboratory (1996-1997), as well as an NSF International Research Fellow at ENEA, Advanced Energy Technologies Division, Rome, Italy. From 2004-2013, he was an Assistant Research Professor (Chemistry) at the U.S. Naval Academy and an Associate Professor (Chemical & Biomolecular Engineering) at North Carolina State University. He joined the Pacific Northwest National Laboratory (PNNL) as a Senior Research Scientist in 2014. His research expertise is liquid/solid electrolytes for energy storage/conversion applications including improved electrolyte characterization tools/methods and the correlation of molecular-level interactions with electrolyte properties and device performance.

"References are extensive and cover the work completed up until 2015, with a few references from 2016. This is a valuable reference for people working in rechargeable batteries in general and lithium-metal anodes in particular. It is timely because the lithium anode has remained the holy grail for four decades, and recent developments discussed in the book may well take us nearer to the goal." (N. Balasubramanian, MRS Bulletin, Vol. 42, November, 2017)
Kunden, die diesen Artikel gekauft haben, kauften auch
Schreiben Sie eine Rezension