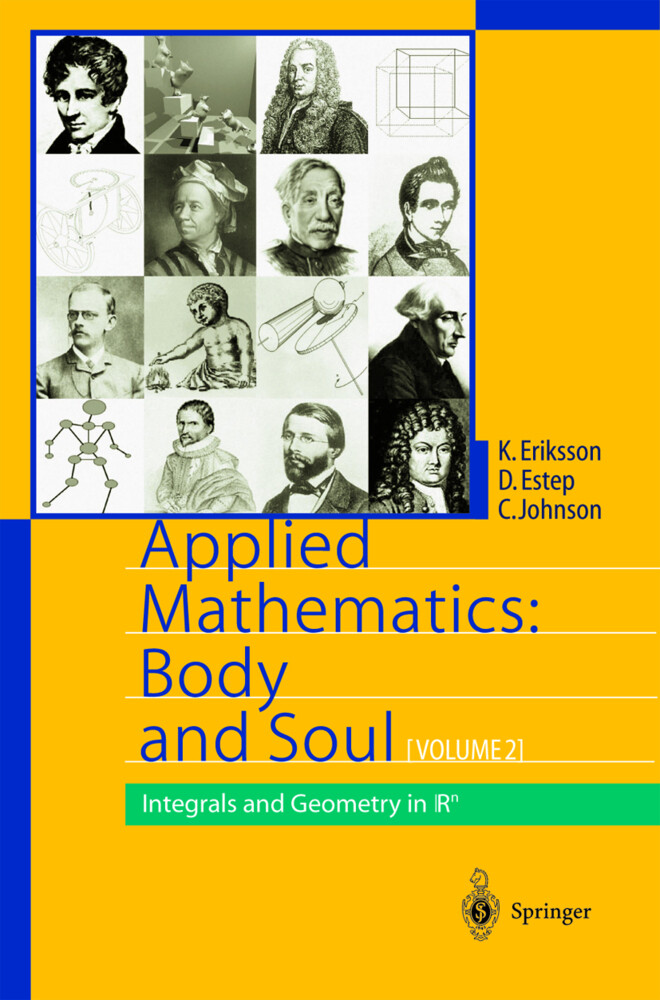 Applied Mathematics: Body & Soul is a mathematics education reform project developed at Chalmers University of Technology and includes a series of volumes and software. The program is motivated by the computer revolution opening new possibilities of computational mathematical modeling in mathematics, science and engineering. It consists of a synthesis of Mathematical Analysis (Soul), Numerical Computation (Body) and Application. Volumes I-III present a modern version of Calculus and Linear Algebra, including constructive/numerical techniques and applications intended for undergraduate programs in engineering and science. Further volumes present topics such as Dynamical Systems, Fluid Dynamics, Solid Mechanics and Electro-Magnetics on an advanced undergraduate/graduate level.

The authors are leading researchers in Computational Mathematics who have written various successful books.

Applied Mathematics: Body and Soul"... It would of course be ideal to combine the more rigorous aspects of mathematics with the problem solving aspects, including numerical methods. This may sound very difficult, but it is exactly what the three volume textbook Applied Mathematics: Body and Soul by K.Erikssosn, D.Estep and C.Johnson aims to do: to combine the constructive /computational (body) aspects with the symbolic (soul) aspects of mathematics in undergraduate teaching, and from my point of view the authors are largely successful in achieving their aim. I thoroughly enjoyed reading these books because they do not use the austere style in which many textbooks of mathematics are written. ...

The material is ordered in such a way that the reader/student proceeds from easier to more difficult subjects, not too differently from many other textbooks covering the same topics. There are, however, some fundamental differences. First of all, the authors try to avoid the theorem/proof structure which many mathematics textbooks use. Instead, many proofs are presented as part of a general line of thought within the main text, followed by a theorem summarizing the results. ...

Further differences with other textbooks are the use of Lipschitz continuity and Cauchy sequences (irrational numbers are for example introduced as limit of the Cauchy sequence of trancated decimal expansions), and the strong emphasis on numerical methods. This may sound surprising at first, because these concepts are usually considered to be too difficult for first year students, but the authors succeed in itnegrating these concepts very naturally into their general exposition. ...

... the books are complemented by a dedicated website which, among other things, gives students access to a mathematics laboratory with the purpose of illustrating many of the concepts introduced in the book. ..."T.Neukirch, University of St. Andrews, Contemporary Physics 2004, Vol. 45, Issue 5"The books are written passionately by the team of enthusiastic academicians from an interesting, nontraditional point of view. Rather than a series of textbooks for students, it is a conceptual reading reflecting an interesting educational philosophy. This exceptionally friendly and transparent exposition comprises a sufficient number of carefully selected examples explained in detail, theoretical material is generously illustrated whenever appropriate, and the reader finds numerous interesting historical insertions in the text. Furthermore, each chapter is concluded with numerous exercises at various levels of difficulty, many of these may be viewed as mini-projects stimulating independent thinking and creativity through a well-balanced synthesis of mathematics, computation and application. The project has an associated web site where additional educational materials can be found, including step-by-step instructions for independent study, problems with solutions, projects, and the Mathematics Laboratory, a collection of software which supports the theory." -

Yu.V.Rogovchenko, ZENTRALBLATT MATH 1033.00010"Mathematics Education needs to be reformed as we now pass into the new millennium", so reads the very first sentence in the preface to volume 1. But readers will be relieved to hear that this refers specifically to the field of applied mathematics (for science and engineering students) with no mention of any need to restructure mathematics curricula internationally.

The process of reform, initiated by the authors, has its roots in work that began 20 years ago in courses in computational mathematical modelling (CMM), and they say that their philosophy has "permeated through their system of basic maths education in calculus and linear algebra". The overall aim is to develop a complete programme for mathematics education in science and engineering up to graduate level.

Currently, the programme is under-pinned by a ser