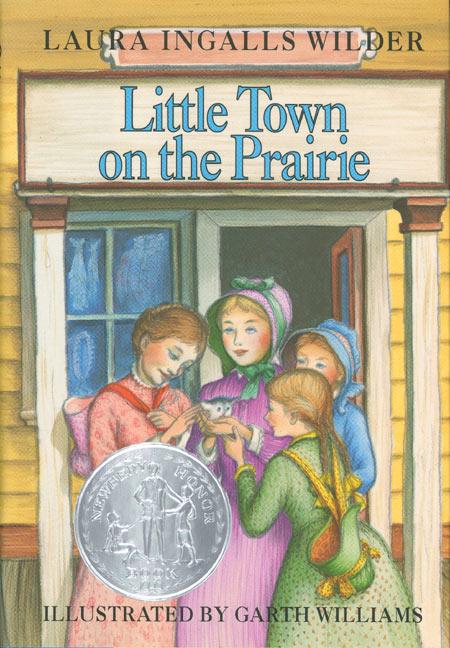 Little Town on the Prairie

Based on the real-life adventures of Laura Ingalls Wilder, Little Town on the Prairie is the seventh book in the award-winning Little House series, which has captivated generations of readers. This edition features the classic black-and-white artwork from Garth Williams.
In Little Town on the Prairie, the young town of De Smet has survived the long, harsh winter of 1880-1881. With the arrival of spring comes invitations to socials, parties, and "literaries.” Laura, who is now fifteen years old, attends her first evening social.
In her spare time, she sews shirts to help earn money to send Mary to a college for the blind. Laura also receives her teaching certificate and can work at a school. And, best of all, Almanzo Wilder asks permission to being walking her home from church. Life in the little town certainly is exciting!
The nine books in the timeless Little House series tell the story of Laura Ingalls Wilder's real childhood as an American pioneer and are cherished by readers of all generations. They offer a unique glimpse into life on the American frontier and tell the heartwarming, unforgettable story of a loving family.

Laura Ingalls Wilder (1867-1957) was born in a log cabin in the Wisconsin woods. With her family, she pioneered throughout America's heartland during the 1870s and 1880s, finally settling in Dakota Territory. She married Almanzo Wilder in 1885; their only daughter, Rose, was born the following year. The Wilders moved to Rocky Ridge Farm at Mansfield, Missouri, in 1894, where they established a permanent home. After years of farming, Laura wrote the first of her beloved Little House books in 1932. The nine Little House books are international classics. Her writings live on into the twenty-first century as America's quintessential pioneer story.