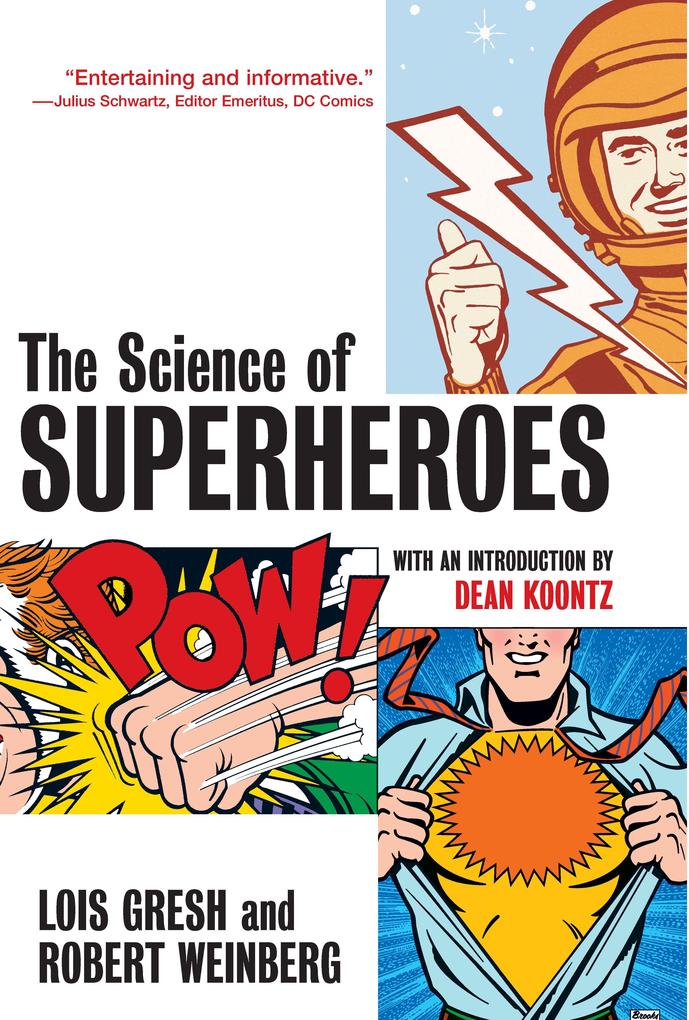 The Science of Superheroes

von Lois H. Gresh, Robert Weinberg
Sprache: Englisch.
Buch (gebunden)
"I found this book to be a hoot from beginning to end. Ms. Gresh and Mr. Weinberg must have spent some time in institutions for the deranged, because well-balanced minds could not have conceived of this project. But thank God for their derangement, f … weiterlesen
Dieser Artikel ist auch verfügbar als:
Geschenk per Mail versenden
Buch (gebunden)

"I found this book to be a hoot from beginning to end. Ms. Gresh and Mr. Weinberg must have spent some time in institutions for the deranged, because well-balanced minds could not have conceived of this project. But thank God for their derangement, for they have produced a package of pure fun from first page to last. If, like me, you admire superheroes from a distance, or if you are a hardcore fan of them, you will enjoy this book as surely as you would enjoy waking one morning to discover that you are invincible, able to fly, and in possession of a totally cool costume behind which to hide your true identity." &mdash; Dean Koontz, from the Introduction
"We comics fans have known it for years, of course: somewhere, in some nether dimension or on some alternate world, there is an Earth on which superheroes are real, living, breathing beings . . . and now Lois Gresh and Bob Weinberg have shown us how thats possible. Mutants . . . aliens . . . scientific geniuses with a penchant for wearing costumes and masks . . . or just plain Joes whove trained their bodies within an inch of their lives . . . all are probed, dissected, examined in loving details. To paraphrase an old DC Comics feature: Science says youre wrong if you believe that The Science of Superheroes isnt more fun than a barrel of genetically-altered winged monkeys." &mdash; Roy Thomas, writer and editor of X-Men, Fantastic Four, The Incredible Hulk, Superman, Justice League of America, Legion of Superheroes, Star Wars, and many other comic book classics
"Weinberg and Gresh tell it like it is and how it would be, if our favorite comic book characters actually existed. The Science of Superheroes is a fascinating andentertaining examination of everything from astrophysics to genetic biology to the evolution of the "superhero." &mdash; Mark Powers, editor of X-Men and Uncanny X-Men

Preface. A Word about the Law. Introduction: Men of Steel, Feathers of Fury by Dean Koontz. Chapter 1: More Powerful than a Speeding Locomotive: Superman. The Superman Legend Begins. What Makes Superman Super? Alien Visitors. The Drake Equation. Rare Earth? A Question of Gravity. Chapter 2: Rays--Cosmic and Gamma: The Fantastic Four and the Incredible Hulk. Humble Beginnings. A Fantastic Foursome. Frankenstein's Monster--Marvel Style. The Perils of Technobabble. The GFP Hulk. Chapter 3: The Dark Knight: Batman. A NonSuper Superhero. The Science of Batman. The Gotham City Earthquake. Chapter 4: Under the Sea: Aquaman and Sub-Mariner. Undersea Heroes. Our Aquatic Ancestors? Breathing Underwater. Pressure. Fluid Breathing. Talking to Fish. Chapter 5: Along Came a Spider: Spider-Man. With Great Power. The Power of a Spider? Clones, Clones, and More Clones. Chapter 6: Green Lanterns and Black Holes: Magic, Science, and Two Green Lanterns. Wanted: An Unlimited Power Source. The Life and Death of Stars. The Origin of Black Holes. Yellow Light. Chapter 7: Of Atoms, Ants, and Giants: Ant Man and the Atom. Ant Man. The Square Cubed Law. The Atom. The Atom Exploded. Chapter 8: Fast, Fast, Fast: The Flash. Introducing the Flash. Problems with Logic. The Speed Barrier. Chapter 9: Good, Evil, and Indifferent Mutants: The X-Men. A Victory Snatched from the Ashes. The Case for Evolution. The Truth about Creationism. Creating the X-Men. Chapter 10: Mysteries in Space: Science Fiction Superheroes. Super Science without Super Heroes. The Secrets of Other Worlds, Exposed! Doomsday on Earth. Across the Ages. The Grandfather Paradox. Chapter 11: The Right Stuff: Donald Duck. The Real Deal. The Duck Man. Appendix A: Who Missed the Cut? Appendix B: The Professionals Speak. Bibliography and Reading List. Acknowledgments. Index.

"The best part of this book is not the science, which is fine but somewhat perfunctory, but the material on the various superheroes." (Sci-Fi, December 2002) "...Gresh and Weinberg's wonderful little book is both a potted history of superhero comics, and a pop science manual for the extremely lazy..." (hero.ac.uk-Higher Education and Research Opportunities, 28 October 2002) "...children who enjoyed the Spider-Man and X-men movies will delight in The Science of SuperheroesACA...Perfect for turning a comic-book obsession into an enthusiasm for the laboratory..." (The Times, 7 December 2002) "...This is definitely a fun book..." (The Alchemist, 9 January 2003) "...All in all I can thoroughly recommend this book to anyone with an interest in science and at least a nostalgic fondness for comics..." (Chemistry In Britain, December 2002) "...The Science of Superheroes could be a useful tool for encouraging comic fans to delve into science..." (Physics World, February 2003)