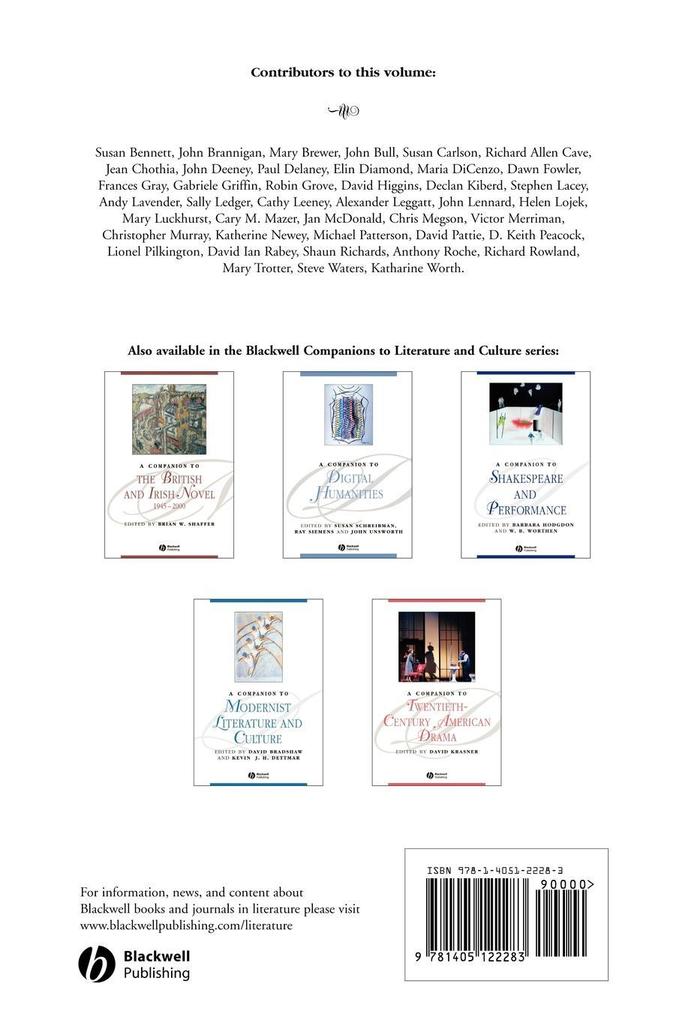 This wide-ranging "Companion to Modern British and Irish Drama" offers challenging analyses of a range of plays in their political contexts. It explores the cultural, social, economic and institutional agendas that readers need to engage with in order to appreciate modern theatre in all its complexity. An authoritative guide to modern British and Irish drama.Engages with theoretical discourses challenging a canon that has privileged London as well as white English males and realism.Topics covered include: national, regional and fringe theatres; post-colonial stages and multiculturalism; feminist and queer theatres; sex and consumerism; technology and globalisation; representations of war, terrorism, and trauma.

Mary Luckhurst is Senior Lecturer in Modern Drama at the University of York. She is the author of Dramaturgy: A Revolution in Theatre (2006), co-author of The Drama Handbook: A Guide to Reading Plays (2002), and co-editor of Theatre and Celebrity in Britain, 1660-2000 (2005). She has also edited The Creative Writing Handbook: Techniques for New Writers (1996), On Directing: Interviews with Directors (1999), and On Acting: Interviews with Actors (2002). She was awarded a University of York outstanding teaching award in 2006 and is also one of the Higher Education Academy's National Teaching Fellows.

"A Companion to Modern British and Irish Drama 1880-2005 is a much needed intervention in the field, with its substantial coverage of Irish drama and significant essays on the work of women playwrights, as well as solid coverage of the usual suspects. It is profitably innovative in terms of both structure and content. Many volumes with such a coverage remit fail to ever go much beyond the standard canonical playwrights and texts...a 'must buy' for all University libraries...this is a volume which will have currency for years to come." New Theatre Quarterly "Luckhurst argues for a reassessment of 'Englishness,' and, accordingly, this companion emphasizes postcolonial and feminist agendas and questions the dominance of urban locales and certain theatrical institutions...combined, the essays provide a necessary reassessment of British and Irish drama." Choice "There is so much valuable material in the book that it is sure to be frequently read and consulted." Donald Hawes, Reference Reviews