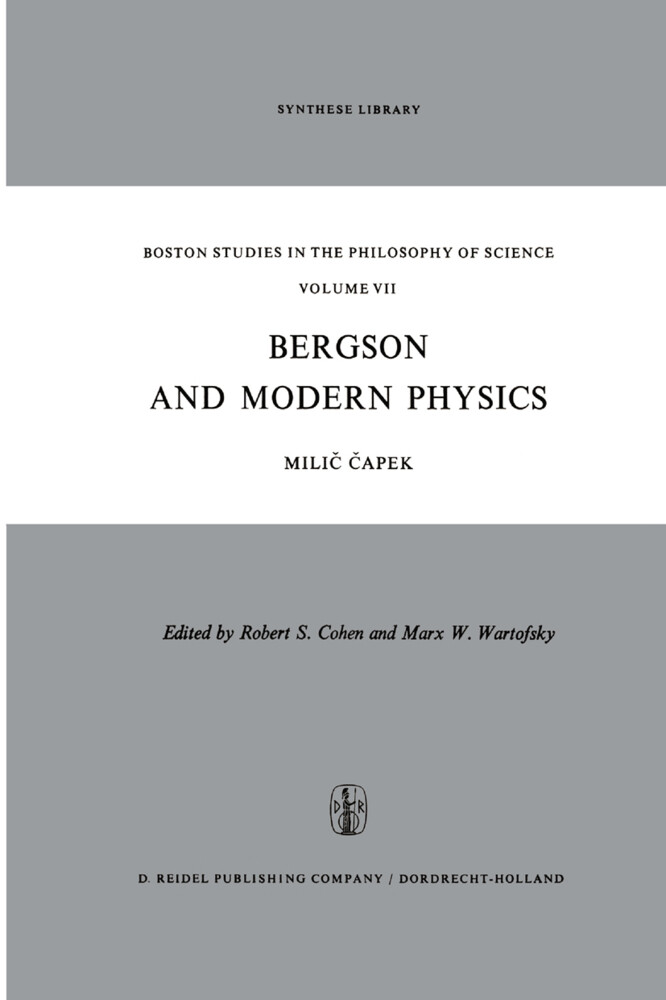 Milic Capek has devoted his scholarship to the history and philosophy of modern physics. With impeccable care, he has mastered the epistemologi­ cal and scientific developments by working through the papers, treatises, correspondence of physicists since Kant, and likewise he has put his learning and critical skill into the related philosophical literature. Coming from his original scientific career with a philosophy doctorate from the Charles University in Prague, Capek has ranged beyond a narrowly defined philosophy of physics into general epistemology of the natural sciences and to the full historical evolution of these matters. He has ex­ pounded his views on these matters in a number of articles and, systema­ tically, in his book The Philosophical Impact of Contemporary PhYSiCS, published in 1961 and reprinted with two new appendices in 1969. His particular gift for many of his readers and students lies in the great period from the mid-nineteenth century through the foundations of the physics and philosophy of the twentieth, and within this spectacular time, Profes­ sor Capek has become a principal expositor and sympathetic critic of the philosophy of Henri Bergson. He joins a distinguished group of scholars -physicists and philosophers -who have been stimulated to some of their most profound and imaginative thought by Bergson's metaphysical and psychological work: Cassirer, Meyerson, de Broglie, Metz, Jankelevitch, Zawirski, and in recent years, Costa de Beauregard, Watanabe, Blanche, and others.

I. Bergson's Biological Theory of Knowledge.
- 1. The Classical Biological Theory of Knowledge: Herbert Spencer.
- 2. The Intermediate Stage: Helmholtz, Mach and Poincaré.
- 3. Bergson's Amendment of the Classical Biological Theory of Knowledge.
- 4. Why Mechanical-Pictorial Models Failed.
- 5. The Contrast Between Technical Control and Intellectual Insight: The Persistent Influence of Macroscopic Imagery.
- 6. Limitations of Panmathematism.
- 7. Negative aspects of Bergson's Epistemology - Its Relations to Bachelard, Bridgman and Empirio-Criticism.
- 8. Bergson, Reichenbach and Piaget.
- 9. Logic of Solid Bodies from Plato to Quine.- II. Bergson's Theory of Duration.
- 1. The Meaning of Immediacy.
- 2. Content of the Bergsonian Intuition.
- 3. The Dynamic Continuity of Duration.
- 4. The Incompleteness of Duration: Novelty and its Denials.
- 5. Superfluity of Succession in the Deterministic Schemes.
- 6. The Leibniz-Fouillé Argument for the Compatibility of Succession and Determinism.
- 7. The Heterogeneity of Duration: Lovejoy-Ushenko's Objections.
- 8. The Deeper Meaning of the 'Indivisible Heterogeneity' of Duration.
- 9. The Unreality of Durationless Instants: Becoming Not MatheMatically Continuous.
- 10. The Inadequacy of the Atomistic Theory of Time.
- 11. The Unity and Multiplicity of Duration: Bergson, Russell and Brouwer.
- 12. Immortality of the Past: Bergson and Whitehead.
- 13. James's and Bergson's Views of the Past Compared.
- 14. The Irreversibility of Duration: The Comments of Royce and Ingarden.
- 15. Duration as Concrete Universal. Bergson and Croce.
- 16. An Outline of Bergon's Philosophy of Mathematics.- III. Bergson's Theory of the Physical World and its Relations to Contemporary Physics.
- 1. The Reality of Duration in the Physical World and its Implications.
- 2. Different Degrees of Temporal Span. Microcosmos as Micro-chronos.
- 3. Two Fundamental Questions.
- 4. The Rejection of the Cartesian Dogma of the Completely Extensionless Mind.
- 5. The Correlation of Different Temporal Rhythms with Different Degrees of Extension.
- 6. Juxtaposition as the Ideal Limit of Distended Duration.
- 7. The Negation of Instantaneous Space in the Relativistic Physics.
- 8. Bergson and Einstein. The Physical World as Extensive Becoming.
- 9. Limitations and Usefulness of the Corpuscular Models.
- 10. Change without Vehicle and Container. Fallacy of Simple Location.
- 11. Limits of the Criticism of Simple Location: Contemporary Independence.
- 12. The Indeterminacy of Microphysical Events. Bergson and Boutroux.
- 13. Bergson and Louis De Broglie.
- 14. Physical Events as Proto-Mental Entities. Bergson, White-head and Bohm.- 15 The Significance and the Limitations of Auditory Models. Bergson and Strawson.
- 16. Concluding Remarks: the World of Laplace and the World of Bergson.-
Appendix I. Russell's Hidden Bergsonism.-
Appendix II. Microphysical Indeterminacy and Free-Dom. Bergson and Peirce.-
Appendix III. Bergson's Thoughts on Entropy and Cosmogony.- Additional Selected Bibliography.- Extract from Bergson's Letter.- Index of Names and Subjects.

Buch (gebunden)
The History of Physics in Cuba

Buch (gebunden)
The Institution of Science and the…