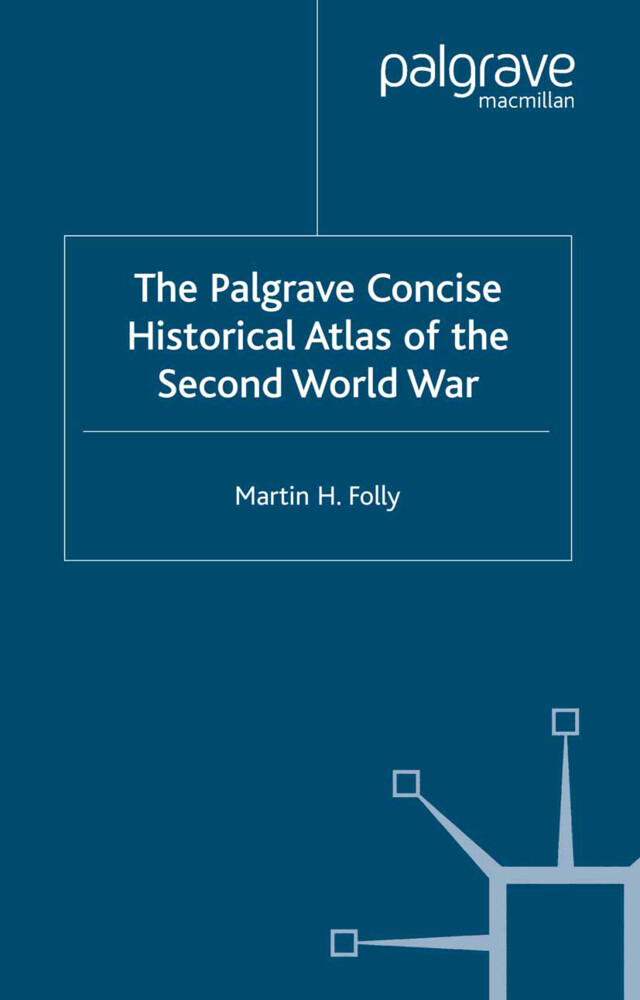 The Palgrave Concise Historical Atlas of the Second World War explores in graphical form, the causes, course, and consequences of this global war. Clear two-colour maps and diagrams are accompanied by a facing page of explanatory text addressing not just battles and campaigns, but also clarifying the key social, economic and political aspects of the war. These tend to get less coverage in conventional military history atlases, but are vital for understanding the totality of the war experience and its enduring legacy. Students and general readers will find it a useful and accessible introduction to the war in all its facets, from its origins to its legacy.

The Road to War in Europe (i) The Road to War in Asia (i) The Road to War in Europe (ii) The Polish Campaign, 1939, and the Partition of Poland The Russo-Finnish War and Soviet-German Relations 1939-41 The 'Phoney War' and Norway 1940 Fall of the Low Countries and France, 1940 Battle of Britain Western Desert Campaigns 1940-41 East African Campaigns and Iraq, Syria, Iran German and Italian Advances in the Balkans 1940-41; War in the Mediterranean 1940-42 Road to War in Asia (ii) Barbarossa: Eastern Front 1941 The Defence of Moscow Japanese Advances 1941-42 (insets: Pearl Harbour, Philippines 1942-42) Turning Points in the Pacific: Battles of Coral Sea and Midway Solomons and New Guinea Campaigns 1942-43 North Africa, 1942 and Operation Torch War in China 1942-45 The North Atlantic 1940-43 Eastern Front 1942 Europe Under the Nazis The 'Final Solution' Lend-Lease 'Big Three' Diplomacy, 1941-44 Operation Husky: Invasion of Sicily Summer Campaign in the USSR, 1943 (inset: Battle of Kursk) Italian Campaign 1943-45 (inset: Monte Cassino) USSR in the 'Great Patriotic War' USA in the War The Greater South-East Asia Co-Prosperity Sphere; Asia Under the Japanese British Home Front German Home Front Japanese Home Front Soviet Advances 1943-44: Ukraine, Belarus, Poland and the Baltic States The Battle for France 1944 Market-Garden and the Drive to the Rhine The Battle of the Bulge Central Pacific and Southern Pacific Advances Burma Campaign Battle of Leyte Gulf Iwo Jima and Okinawa The Combined Bomber Offensive Against Germany Soviet Advances of 1944-45: The Balkans and the Percentages Agreement The Yalta Conference Battle for Germany 1945 The Final Defeat of Japan United Nations (Including Cost of the War) Post-War Settlement and Legacy of War in Europe Post-War Settlement and Legacy of War in Asia

MARTIN H. FOLLY is Senior Lecturer in the School of International Studies at Brunel University, UK. He is the author of Churchill, Whitehall and the Soviet Union, 1940-45 (Palgrave, 2000) and The United States and World War II (2002). He has published articles on North Atlantic Treaty, and on the Grand Alliance in World War II.

'For students following Second World War courses this atlas will be invaluable for placing themes in their wider context and for quickly ascertaining the essence of particular military phases of the war. Its clear language and lively tone are complemented by its admirably deft reflection of the results of recent research.' - Robert Mackay, Department of International Studies, Nottingham Trent University, UK