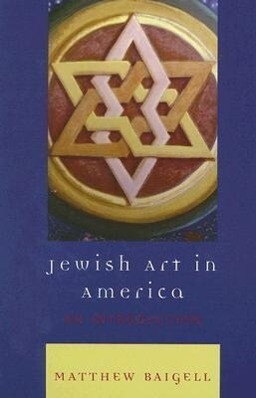 Jewish Art in America: An Introduction

von Matthew Baigell
Sprache: Englisch.
Buch (gebunden)
In this first book-length study of Jewish art in America, Matthew Baigell explores works from the early settlers of America to the present. It is a narrative history of the Jewish experience in American art as seen through the works of many different … weiterlesen
Dieser Artikel ist auch verfügbar als:
Geschenk per Mail versenden
Buch (gebunden)

In this first book-length study of Jewish art in America, Matthew Baigell explores works from the early settlers of America to the present. It is a narrative history of the Jewish experience in American art as seen through the works of many different artists. Its main focus is the examination of Jewish subject matter employed by artists, their responses to their religious and ethnic heritage as well as to significant events of the time.

A pioneer in the field of Jewish American art, Baigell has fittingly written the first full-length introduction on the subject. A welcome and much-needed contribution. -- Samantha Baskind, author of Encyclopedia of Jewish American Artists and Raphael Soyer and the Search for Modern Jewish Art What Matthew Baigell is proposing is something quite unique and certainly cutting edge: the presentation that there is a Jewish art in America which is distinct to its practitioners and which does not necessarily conform to European conceptions of Jews and Jewish art and which at the same time in America is both part of the mainstream and a unique stream unto itself. Very fresh and in some ways radical. -- Seth Wolitz, Chair of Jewish Studies, University of Texas at Austin In this first book-length study of Jewish art in America, Matthew Baigell explores works from the early settlers of America to the present. Baigell concentrates on Jewish subject matter employed by artists as they illustrated aspects of their religious and ethnic heritage and as they responded to major events over the decades, including the Great Migration, Great Depression, the Holocaust, and the founding of the State of Israel, as well as the dispersal of Jewish artists around the country and the rise of feminism and spiritualism in the late-20th century. Jewish Book World The book's...merit lies in its useful documentation of the work of artists, some of them like Max Weber or Ben Shahn, reasonably well known, but in many instances much less familiar and perhaps worthy of greater attention that they have received. -- W. Cahn, emeritus, Yale University CHOICE [Baigell] provides an excellent background for understanding the various contexts in which American Jews, including artists, have operated...[a] worthy addition to one's library. American Jewish History, November 2008 Given his unmatched expertise in Jewish American art, and his experience as an author of general narrative history in the field of American art, I could think of no one more suited to the task of putting together the a textbook on Jewish American Art history than Matthew Baigell. -- Daniel Morris, Professor of English and Jewish Studies, Purdue University The editors hope that 'by historicizing the Jewish art question, the essays in this volume pose the question in different ways and, above all, keep it alive and unpredictable as a question that can shed light on the relationship between Jews, the arts, and modernity' (18)... What is impressive about The Art of Being Jewish, and marks it as the most significant edited volume in the field since Catherine Soussloff's Jewish Identity in Modern Art History, published a decade ago, is the overall rigorousness and variety of its contributions... Once thought to be a liability, it is precisely the imprecision of the term 'Jewish art,' its fecund ambiguity, which makes it most worth holding on to. Religion and The Arts